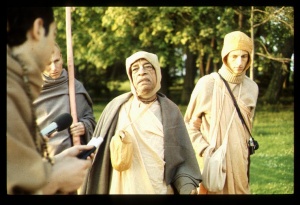 Prabhupāda: (aside) What is that?

Prabhupāda: In my room there is.

Prabhupāda: No. Everyone goes to bring that flask, and everyone is lost.

Prabhupāda: (to translator) In German language you can just translate this ślokas he has uttered.

So this was a discussion between Arjuna and Kṛṣṇa in the Battlefield of Kurukṣetra. So the subject of discussion was that although the battle was declared, Arjuna, when he actually found that, "On the other side there are my relatives," how he could slain them? Kṛṣṇa advised that, "Everyone must execute his prescribed duty without consideration of any personal loss or gain." According to Vedic civilization, there are four divisions of the society. Everywhere the same divisions are there all over the world. This is very natural. Just like we can study from our own body, there is head, there is arm, there is belly and there is leg, similarly, in the society there must be a class of men who should be considered as brain; another class of men should be there who will protect the society from danger; another class of men will be expert in producing food grains and give protection to the cows and make trade; so, and the rest class of men, namely who cannot work as brain neither can work as protector from danger, nor they can produce food grains or give protection to the cows, they are called śūdras—as you cannot avoid, to make your body complete, the brain department, the arms department, the belly department and the walking or working department.

So Arjuna belonged to the group of men who was meant for giving protection to the society. So when he was declined to fight, Arjuna, when he was declining to fight, at that time Kṛṣṇa gave him advice that, "It is your duty to fight." So generally killing is not good at all, but when there is enemy, aggressor, then to kill the aggressor is not sin. So the other party in the Battlefield of Kurukṣetra, they became aggressor to the Arjuna's party. Now, this is the set-up of the Bhagavad-gītā. The real purpose is to instruct Arjuna about spiritual understanding.

So spiritual understanding means first of all to know what is spirit. If you do not know what is spirit, then where is spiritual understanding? People are too much engrossed with the body. That is called materialism. But when you understand what is spirit and you act accordingly, that is called spiritualism. So Arjuna was hesitating to fight with the other party because he had bodily relationship with them. So between Arjuna and Kṛṣṇa there was discussion, but that was friendly discussion. Therefore, when Arjuna understood that simply friendly discussion could not solve the problem, he became His disciple. Kṛṣṇa . . . Arjuna surrendered to Kṛṣṇa, śiṣyas te 'ham śādhi māṁ prapannam (BG 2.7): "My dear Kṛṣṇa, so long we are talking as friend. Now I become Your regular disciple. Kindly save me by instruction. What I have to do?" Therefore, when this stage was arrived, Kṛṣṇa is advising Arjuna as follows: śrī-bhagavān uvāca.

Now, it is said here . . . who is saying to Arjuna? The author, or the recorder of Bhagavad-gītā . . . Bhagavad-gītā was spoken by Kṛṣṇa. It was a discussion between Kṛṣṇa and Arjuna, and it was recorded by Vyāsadeva, and later on it became a book, just like when we speak, it is recorded and later on it is published as a book. Therefore in this book it is said, bhagavān uvāca. Vyāsadeva is the writer. He does not say that, "I speak." He says, bhagavān uvāca, means "The Supreme Personality of Godhead said."

So Kṛṣṇa is accepted by the authorities as Bhagavān, or the Supreme Personality of Godhead. And what is Bhagavān? Bhagavān means that one who is fully equipped with six opulences. "Fully equipped with all opulences" means Bhagavān is the richest personality. How much rich Bhagavān, or God, is, we can understand, that we are proud of possessing a few acres of land, and Bhagavān means who is the proprietor of the whole universe. Therefore He is considered the richest. Similarly, He is considered the strongest. And similarly, He is considered the wisest. And similarly, He is the most beautiful personality. In this way, when you find a person the richest, the most beautiful, the most wise, the strongest—in this way, when you find, that is Bhagavān, or God.

So when Kṛṣṇa was present on this planet He proved all these opulences possessed by Him. Take, for example, that everyone marries, but Kṛṣṇa, being the Supreme Person, He married 16,108 women. But it is not that He remained one husband for sixteen thousand wives. He made arrangement for providing the sixteen thousand wives in different palaces. Each palace, there is described, they were made of first-class marble stone and furniture made of ivory, and the sitting place made of very nice, soft cotton. In this way there is description. And the outward compound, there are many flower trees. Not only that, He also expanded Himself into sixteen thousand expansion, personal expansion. And He was living in that way with each and every wife. So it is not very difficult task for God. (devotees offer obeisances as curtains open or close) God is said to be situated everywhere. So within our vision, if He is situated in sixteen thousand homes, what is the difficulty for Him?

So here it is said, śrī-bhagavān uvāca. The most powerful authority is speaking. Therefore, whatever He says, it is to be taken as truth. In our this conditional life, just like we are living under material condition, we have got four defects—we commit mistake, we are illusioned, and we want to cheat also, and our senses are imperfect. So knowledge received from a person who is infected with four kinds of deficiencies is not perfect. So when you receive knowledge from a person who is transcendental to all these four kinds of defects, that is perfect knowledge. Modern scientists, they theorize that, "It may be like this. It may be like that," but that is not perfect knowledge. So if you speculate with your imperfect senses, what is the value of that knowledge? It may be, I mean to say, partial knowledge, but that is not perfect knowledge.

Therefore our process of receiving knowledge is to receive it from the perfect person. And therefore we are receiving knowledge from Kṛṣṇa, Bhagavān, the most perfect, and therefore our knowledge is perfect. Just like a child: he may be imperfect, but if his father says: "My dear child, this is called spectacle," so if the child speaks, "This is spectacle," that knowledge is perfect. Because the child does not make research to find out knowledge. He asks his father or mother, "What is this, Daddy? What is this, Mother?" and the mother says: "My dear child, this is this." Another example can be given that if a child does not, in childhood, he does not know who is his father, then he cannot make any research work. If he makes research work to find out his father, he'll never find out his father. But if he asks his mother, "Who is my father?" and the mother says: "He is your father," that is perfect. Therefore knowledge, knowledge of God, who is beyond your sense perception, how can you know? Therefore you have to know from God Himself or His representative.

So here Kṛṣṇa, the Supreme Personality of Godhead, is speaking, and that is the final authority. He says to Arjuna as follows. He says, aśocyān anvaśocas tvaṁ prajñā-vādāṁś ca bhāṣase (BG 2.11): "My dear Arjuna, you are talking like very learned scholar, but you are lamenting on a subject matter which you should not do." Gatāsūn agatāsūṁś ca nānuśocanti paṇḍitāḥ. Gatāsūn means this body. When it is dead or when it is alive, bodily conception of life is foolishness. So no learned man takes serious consideration of the body. Therefore in the Vedic literature it is said that, "One who is in the bodily concept of life, he is nothing more than an animal." Therefore at the present moment, without knowledge of the self, the whole world is going on under the bodily concept of life. The bodily concept of life is there amongst the animals. The cats and dogs, they are very proud of becoming a big cat or big dog. Similarly, if a man also becomes similarly proud that, "I am big American," "big German," "big . . ." what is the difference? But that is actually going on, and therefore they are fighting like cats and dogs.

So we shall discuss more tomorrow.