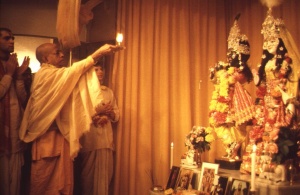 Prabhupāda: . . . sa sannyāsī (BG 6.1). The mission of sannyāsī is given in the Bhagavad-gītā. Karmī. Karmī means he works, and he wants to enjoy the fruit. That is karmī. But Bhagavān, Kṛṣṇa, said, anāśritaḥ karma-phalaṁ (BG 6.1): one who does not take the result of karma . . . suppose you are a businessman. So you are working very hard, earning $50,000. If you don’t take that, then you are sannyāsī. Anāśritaḥ karma-phalaṁ, kāryaṁ: it is my duty. So if he does not take the result of karma, who will take? Kṛṣṇa said, kuruṣva tat mad-arpaṇa: "Give Me." (laughter) Kuruṣva tat mad-arpaṇam. Yat karoṣi, yaj juhoṣi, yad aśnāsi, yat tapasyasi kuruṣva (BG 9.27). This is life. You read Eighteenth Chapter, very nice verse. To give up the karma phalaṁ, the result of your work, to Kṛṣṇa—that is real sannyāsa; that is real renunciation. (aside) So you try to impress on that way. You have got . . . (indistinct) . . . at Los Angeles, and uncover . . . (indistinct) . . . you can see? Send directly to Bali-mardana.

Prabhupāda: No, you can leave the check here.

Prabhupāda: Whatever detail can be sent. Just like we are traveling, we require thousands and thousands of dollars. Why shall I neglect? You cannot . . . if I do not want to spend money for airplane, how could I come to your country? So money is required. Money is not bad. Money, if it is spent for Kṛṣṇa, then it is Lakṣmī, real Lakṣmī, as lakṣmī sahasra-śata sambrahma-sev . . . (Bs. 5.29). Laksmi's business is to stay engaged in Kṛṣṇa's service. So all the money of the world, it should be engaged for Kṛṣṇa's service. Kṛṣṇa said, yat karoṣi: "Never mind whatever you are doing; you give Me the result." Is it not? Bhagavad-gītā, you have read it?

Prabhupāda: So give to Kṛṣṇa. And Kṛṣṇa wants money for paying the airplane fare. (laughter) I am going, daily from . . . (indistinct) . . . New York to London, London to here, there, spending thousands and thousands of dollars. So who will pay? Kṛṣṇa will pay. Because I am servant of Kṛṣṇa, He will pay.

This is our Gosvāmīs' instruction.

Everything, īśāvāsyam idaṁ sarvam (ISO 1), everything has relation with Kṛṣṇa. So even is Kṛṣṇa's money, why should He give it, as . . . (indistinct) . . . as material? Anything dovetailed with Kṛṣṇa is spiritual. It is not material.

Karma vairāgya. Rūpa Gosvāmī. Phalgu means false renunciation. False. Just like Māyāvādīs, they think, "No, no, we shall not touch it." Why not? What money has done? Money is Lakṣmī. Why it should be not touched? But engaged in Kṛṣṇa's service. Of course, one who has no idea of Kṛṣṇa—he cannot spend for Kṛṣṇa—he should not touch. That is good, because he will misuse. He should not touch. But one who can . . . who knows how to spend money for Kṛṣṇa, why he should not?

So, New York temple is very nice, very . . . (indistinct) . . . don’t be disturbed by outward elements. Fix up your understanding. Then māyā will not be able to touch. Our this flourishing condition, there are so many envious persons, they want to destroy this organization. Because the whole world is full of envious persons. Material world means envious. So they know, so many enemies are . . . Kṛṣṇa will already protect; otherwise so many counteracting things are going on, especially in India. Even Caitanya Mahāprabhu had to face so many. Kṛṣṇa had to kill so many demons from the beginning.

Devotee (1): Right from His birth.

Prabhupāda: Yes. So there are many demons. We have no strength to kill them, but Kṛṣṇa will kill them.

Prabhupāda: They cannot win. Kṛṣṇa will kill them. Prahlāda Mahārāja could not kill Hiraṇyakaśipu, but Kṛṣṇa killed him. Anyone who is impediment to this movement, he will be killed. We must be also steady, very firmly convinced . . . (indistinct) . . . "I don’t care for them."

Gopāla Kṛṣṇa: We should never deviate from the plan . . . (indistinct)

Prabhupāda: And offering obeisances. Where is the difficulty? There is no difficulty. Simply chant Hare Kṛṣṇa mantra and distribute books, hear Bhagavad-gītā, Śrīmad-Bhāgavatam, Deity worship. If you strictly follow these things, no māyā can touch you. And if you deviate, then māyā is very strong: immediately capture. Daivī hy eṣā guṇa-mayī mama maya (BG 7.14).

Gopāla Kṛṣṇa: Did we get the permit to build the temple in Bombay now?

Prabhupāda: . . . it cannot be checked by any material thing. Checking is for materialist, not for spiritual.

Gopāla Kṛṣṇa: There is a very big women's liberation movement in America, they call it Women Lib. So they want equal opportunity for women.

Devotee (2): They are trying. (laughter)

Prabhupāda: Where is the liberty? The woman has to carry the child for ten months—nature's way. To go against nature, that is foolishness. God has made woman. Man should have respect . . . (indistinct) . . . what woman can do, man cannot do. What man can do, woman cannot do. So how there can be equal rights? That is not possible. Everyone should do his own duty and be happy. Kāryaṁ karma karoti (BG 6.1): "It is my duty. I have to do it." Husband should give all comforts to the wife; she may not be uncomfortable in any way. They want food, cloth, little ornaments. Yes. In so many ways, the husband must give to keep the woman satisfied . . . (indistinct) . . . in India you will find that the poor man, they will get—what is called—lead bangles. They cannot provide silver or gold, but bangle must be there. If not lead, then glass. She will be satisfied with good sārī, good bangle, good foods and some children. Thats all. (break) Paritrāṇāya sādhūnāṁ vināśāya (BG 4.8). Two things. Kṛṣṇa has got two things—to kill the demons and to benedict the devotees. (end)