741103 - Letter to Satsvarupa written from Bombay 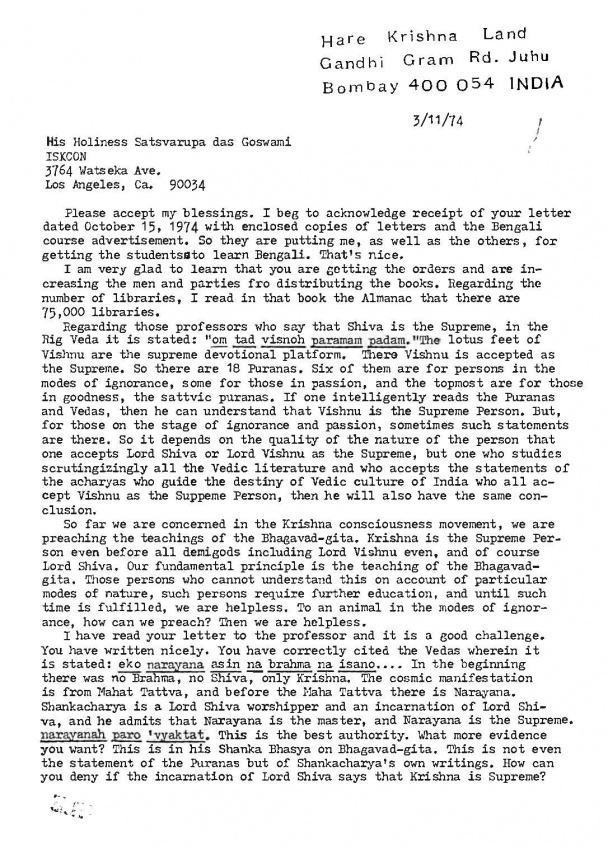 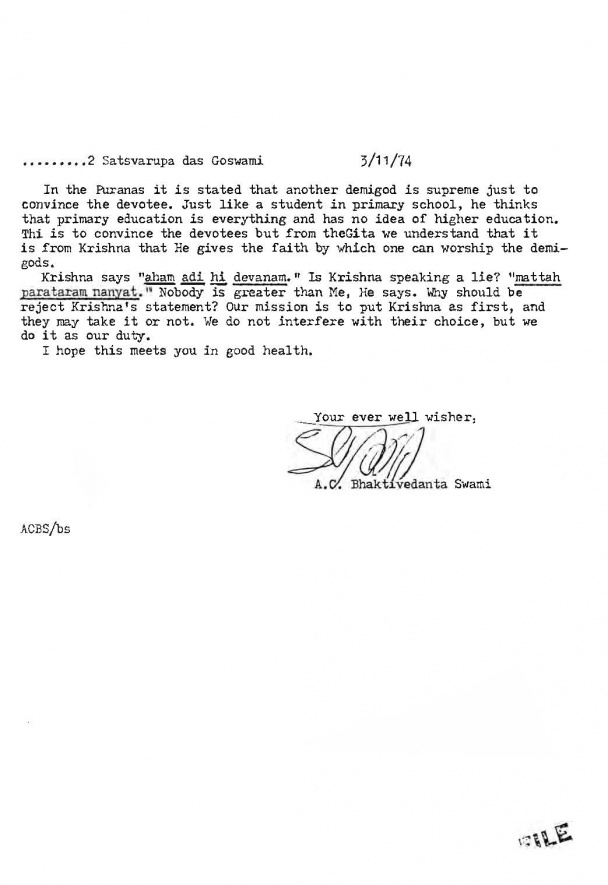 Please accept my blessings. I beg to acknowledge receipt of your letter dated October 15, 1974 with enclosed copies of letters and the Bengali course advertisement. So they are putting me, as well as the others, for getting the students to learn Bengali. That's nice.
I am very glad to learn that you are getting the orders and are increasing the men and parties for distributing the books. Regarding the number of libraries, I read in that book the Almanac that there are 75,000 libraries.
Regarding those professors who say that Shiva is the Supreme, in the Rig Veda it is stated: "om tad visnoh paramam padam." The lotus feet of Vishnu are the supreme devotional platform. There Vishnu is accepted as the Supreme. So there are 18 Puranas. Six of them are for persons in the modes of ignorance, some for those in passion, and the topmost are for those in goodness, the sattvic puranas. If one intelligently reads the Puranas and Vedas, then he can understand that Vishnu is the Supreme Person. But, for those on the stage of ignorance and passion, sometimes such statements are there. So it depends on the quality of the nature of the person that one accepts Lord Shiva or Lord Vishnu as the Supreme, but one who studies scrutingizingly all the Vedic literature and who accepts the statements of the acharyas who guide the destiny of Vedic culture of India who all accept Vishnu as the Supreme Person, then he will also have the same conclusion.
So far we are concerned in the Krishna consciousness movement, we are preaching the teachings of the Bhagavad-gita. Krishna is the Supreme Person even before all demigods including Lord Vishnu even, and of course Lord Shiva. Our fundamental principle is the teaching of the Bhagavad-gita. Those persons who cannot understand this on account of particular modes of nature, such persons require further education, and until such time is fulfilled, we are helpless. To an animal in the modes of ignorance, how can we preach? Then we are helpless.
I have read your letter to the professor and it is a good challenge. You have written nicely. You have correctly cited the Vedas wherein it is stated: eko narayana asin na brahma na isano. . . In the beginning there was no Brahma, no Shiva, only Krishna. The cosmic manifestation is from Mahat Tattva, and before the Maha Tattva there is Narayana. Shankacharya is a Lord Shiva worshipper and an incarnation of Lord Shiva, and he admits that Narayana is the master, and Narayana is the Supreme. narayanah paro 'vyaktat. This is the best authority. What more evidence you want? This is in his Shanka Bhasya on Bhagavad-gita. This is not even the statement of the Puranas but of Shankacharya's own writings. How can you deny if the incarnation of Lord Shiva says that Krishna is Supreme?

In the Puranas it is stated that another demigod is supreme just to convince the devotee. Just like a student in primary school, he thinks that primary education is everything and has no idea of higher education. This is to convince the devotees but from the Gita we understand that it is from Krishna that He gives the faith by which one can worship the demigods.
Krishna says "aham adi hi devanam." Is Krishna speaking a lie? "mattah parataram nanyat." Nobody is greater than Me, He says. Why should we reject Krishna's statement? Our mission is to put Krishna as first, and they may take it or not. We do not interfere with their choice, but we do it as our duty.
I hope this meets you in good health.