741108 - Letter to Rupanuga written from Bombay 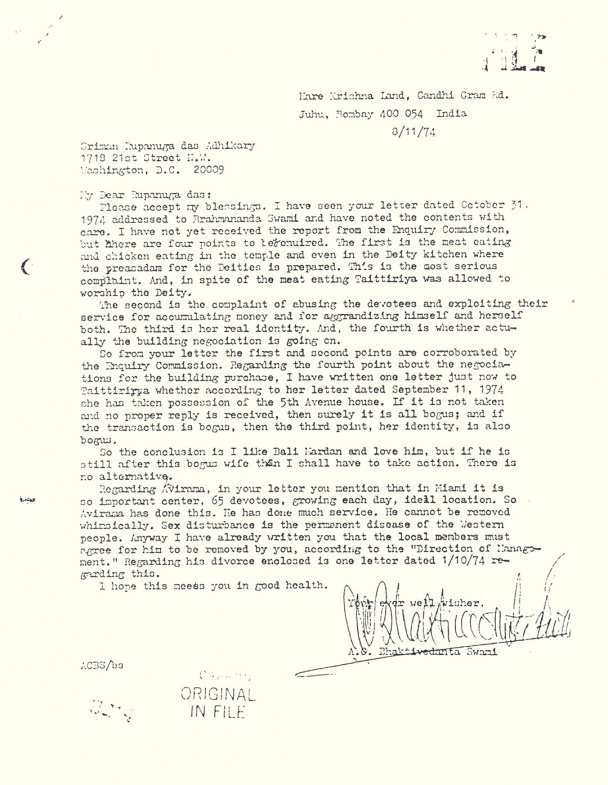 
My Dear Rupanuga das:
Please accept my blessings. I have seen your letter dated October 31, 1974 addressed to Brahmananda Swami and have noted the contents with care. I have not yet received the report from the Enquiry Commission, but there are four points to be enquired. The first is the meat eating and chicken eating in the temple and even in the Deity kitchen where the prasadam for the Deities is prepared. This is the most serious complaint. And, in spite of the meat eating Taittiriya was allowed to worship the Deity.
The second is the complaint of abusing the devotees and exploiting their service for accumulating money and for aggrandizing himself and herself both. The third is her real identity. And, the fourth is whether actually the building negotiation is going on.
So from your letter the first and second points are corroborated by the Enquiry Commission. Regarding the fourth point about the negotiations for the building purchase, I have written one letter just now to Taittiriya whether according to her letter dated September 11, 1974 she has taken possession of the 5th Avenue house. If it is not taken and no proper reply is received, then surely it is all bogus; and if the transaction is bogus, then the third point, her identity, is also bogus.
So the conclusion is I like Bali Mardan and love him, but if he is still after this bogus wife then I shall have to take action. There is no alternative.
Regarding Avirama, in your letter you mention that in Miami it is so important center, 65 devotees, growing each day, ideal location. So Avirama, has done this. He has done much service. He cannot be removed whimsically. Sex disturbance is the permanent disease of the Western people. Anyway I have already written you that the local members must agree for him to be removed by you, according to the "Direction of Management." Regarding his divorce enclosed is one letter dated 1/10/74 regarding this.
I hope this meets you in good health.