741123 - Letter to Kirtanananda written from Bombay 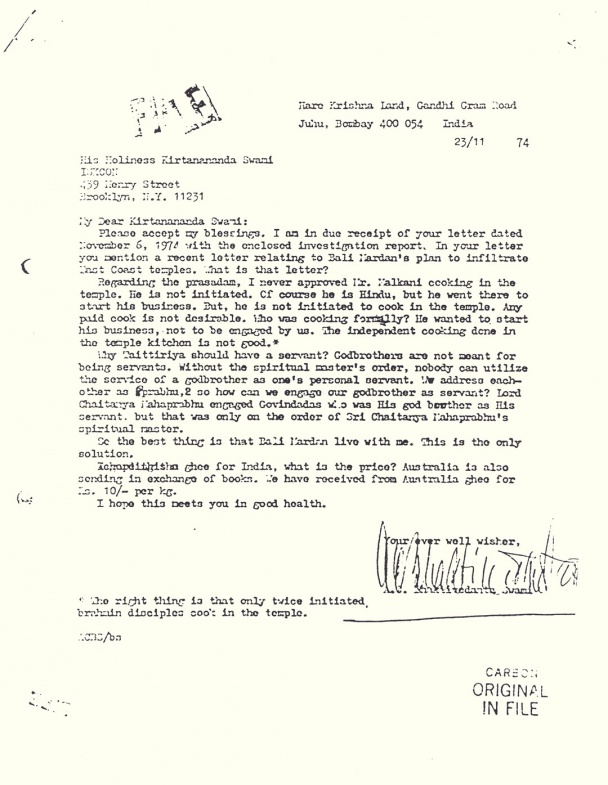 My Dear Kirtanananda Swami:
Please accept my blessings. I am in due receipt of your letter dated November 6, 1974 with the enclosed investigation report. In your letter you mention a recent letter relating to Bali Mardan's plan to infiltrate East Coast temples. What is that letter?
Regarding the prasadam, I never approved Mr. Malkani cooking in the temple. He is not initiated. Of course he is Hindu, but he went there to start his business. But, he is not initiated to cook in the temple. Any paid cook is not desirable. Who was cooking formally? He wanted to start his business, not to be engaged by us. The independent cooking done in the temple kitchen is not good.*
Why Taittiriya should have a servant? Godbrothers are not meant for being servants. Without the spiritual master's order, nobody can utilize the service of a godbrother as one's personal servant. We address each-other as prabhu, so how can we engage our godbrother as servant? Lord Chaitanya Mahaprabhu engaged Govindadas who was His god brother as His servant, but that was only on the order of Sri Chaitanya Mahaprabhu's spiritual master.
So the best thing is that Bali Mardan live with me. This is the only solution.
Regarding ghee for India, what is the price? Australia is also sending in exchange of books. We have received from Australia ghee for Rs. 10-per kg.
I hope this meets you in good health.

A.C. Bhaktivedanta Swami
* The right thing is that only twice initiated brahmin disciples cook in the temple.