741208 - Letter to Ameyatma written from Bombay 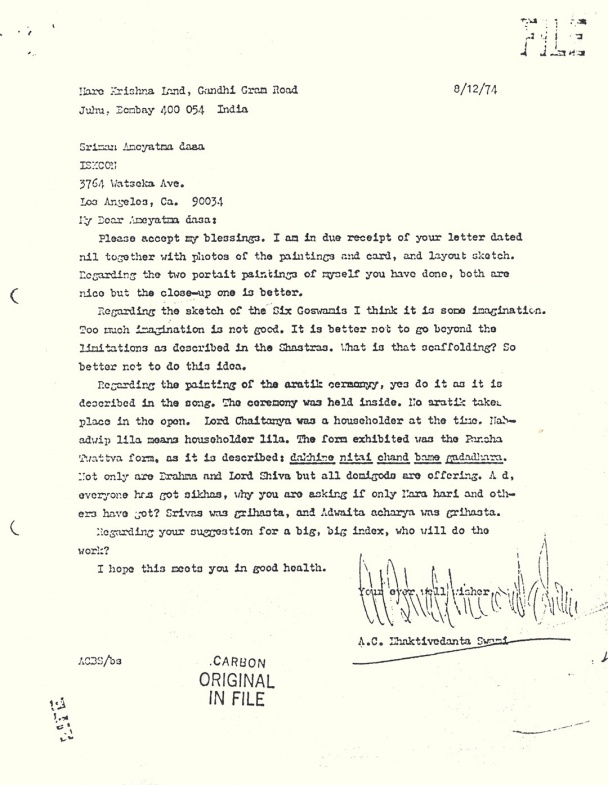 Sriman Ameyatma dasa
ISKCON
3764 Watseka Ave.
Los Angeles, Ca.   90034
My Dear Ameyatma dasa:
Please accept my blessings. I am in due receipt of your letter dated nil together with photos of the paintings and card, and layout sketch. Regarding the two portrait paintings of myself you have done, both are nice but the close-up one is better.
Regarding the sketch of the Six Goswamis I think it is some imagination. Too much imagination is not good. It is better not to go beyond the limitations as described in the Shastras. What is that scaffolding? So better not to do this idea.
Regarding the painting of the aratik ceremony, yes do it as it is described in the song. The ceremony was held inside. No aratik takes place in the open. Lord Chaitanya was a householder at the time. Navadwipa lila means householder lila. The form exhibited was the Pancha Tattva form, as it is described: dakhine nitaicand bame gadadhara. Not only are Brahma and Lord Shiva but all demigods are offering. And, everyone has got sikhas, why you are asking if only Nara hari and others have got? Srivas was grhastha, and Adwaita acharya was grhastha.
Regarding your suggestion for a big, big index, who will do the work?
I hope this meets you in good health.