750119 - Letter to Satsvarupa written from Bombay 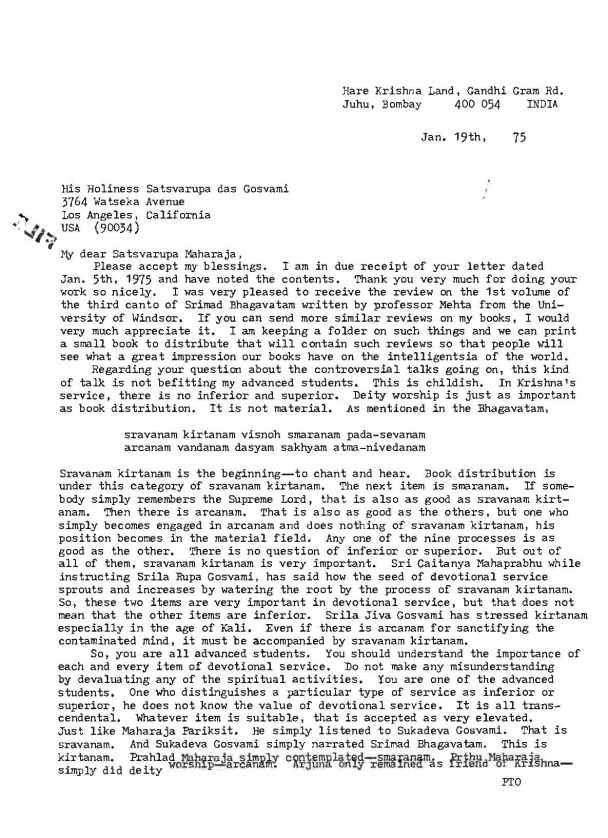 Letter to Satsvarupa Maharaj (Page 1 of 2) 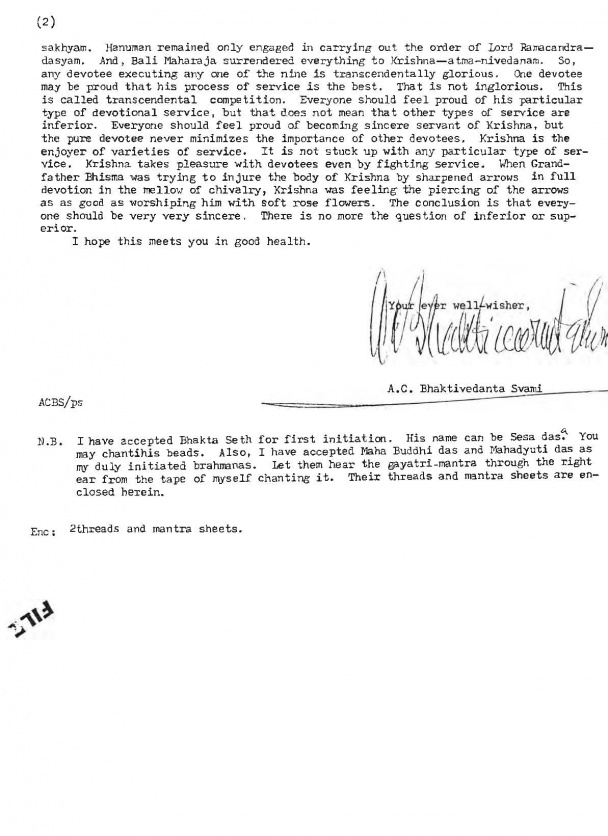 Letter to Satsvarupa Maharaj (Page 2 of 2)

My dear Satsvarupa Maharaja,
Please accept my blessings. I am in due receipt of your letter dated Jan. 5th, 1975 and have noted the contents. Thank you very much for doing your work so nicely. I was very pleased to receive the review on the 1st volume of the third canto of Srimad Bhagavatam written by professor Mehta from the University of Windsor. If you can send more similar reviews on my books, I would very much appreciate it. I am keeping a folder on such things and we can print a small book to distribute that will contain such reviews so that people will see what a great impression our books have on the intelligentsia of the world.
Regarding your question about the controversial talks going on, this kind of talk is not befitting my advanced students. This is childish. In Krishna's service, there is no inferior and superior. Deity worship is just as important as book distribution. It is not material. As mentioned in the Bhagavatam,

Sravanam kirtanam is the beginning—to chant and hear. Book distribution is under this category of sravanam kirtanam. The next item is smaranam. If somebody simply remembers the Supreme Lord, that is also as good as sravanam kirtanam. Then there is arcanam. That is also as good as the others, but one who simply becomes engaged in arcanam and does nothing of sravanam kirtanam, his position becomes in the material field. Any one of the nine processes is as good as the other. There is no question of inferior or superior. But out of all of them sravanam kirtanam is very important. Sri Caitanya Mahaprabhu while instructing Srila Rupa Gosvami, has said how the seed of devotional service sprouts and increases by watering the root by the process of sravanam kirtanam. So, these two items are very important in devotional service, but that does not mean that the other items are inferior. Srila Jiva Gosvami has stressed kirtanam especially in the age of Kali. Even if there is arcanam for sanctifying the contaminated mind, it must be accompanied by sravanam kirtanam.
So, you are all advanced students. You should understand the importance of each and every item of devotional service. Do not make any misunderstanding by devaluating any of the spiritual activities. You are one of the advanced students. One who distinguishes a particular type of service as inferior or superior, he does not know the value of devotional service. It is all transcendental. Whatever item is suitable, that is accepted as very elevated. Just like Maharaja Pariksit. He simply listened to Sukadeva Gosvami. That is sravanam. And Sukadeva Gosvami simply narrated Srimad Bhagavatam. This is kirtanam. Prahlada Maharaja simply contemplated—smaranam. Prthu Maharaja simply did deity worship—arcanam. Arjuna only remained as friend of Krishna—sakhyam. Hanuman remained only engaged in carrying out the order of Lord Ramacandra—dasyam. And Bali Maharaja surrendered everything to Krishna—atma-nivedanam. So, any devotee executing any one of the nine is transcendentally glorious. One devotee may be proud that his process of service is the best. That is not inglorious. This is called transcendental competition. Everyone should feel proud of his particular type of devotional service, but that does not mean that other types of service are inferior. Everyone should feel proud of becoming sincere servant of Krishna, but the pure devotee never minimizes the importance of other devotees. Krishna is the enjoyer of varieties of service. It is not stuck up with any particular type of service. Krishna takes pleasure with devotees even by fighting service. When Grandfather Bhisma was trying to injure the body of Krishna by sharpened arrows, in full devotion in the mellow of chivalry, Krishna was feeling the piercing of the arrows as good as worshiping him with soft rose flowers. The conclusion is that everyone should be very very sincere. There is no more the question of inferior or superior.
I hope this meets you in good health.

N.B. I have accepted Bhakta Seth for first initiation. His name can be Sesa [handwritten] dasa. You may chant on his beads. Also, I have accepted Maha Buddhi das and Mahadyuti das as my duly initiated brahmanas. Let them hear the gayatri-mantra through the right ear from the tape of myself chanting it. Their threads and mantra sheets are enclosed herein.