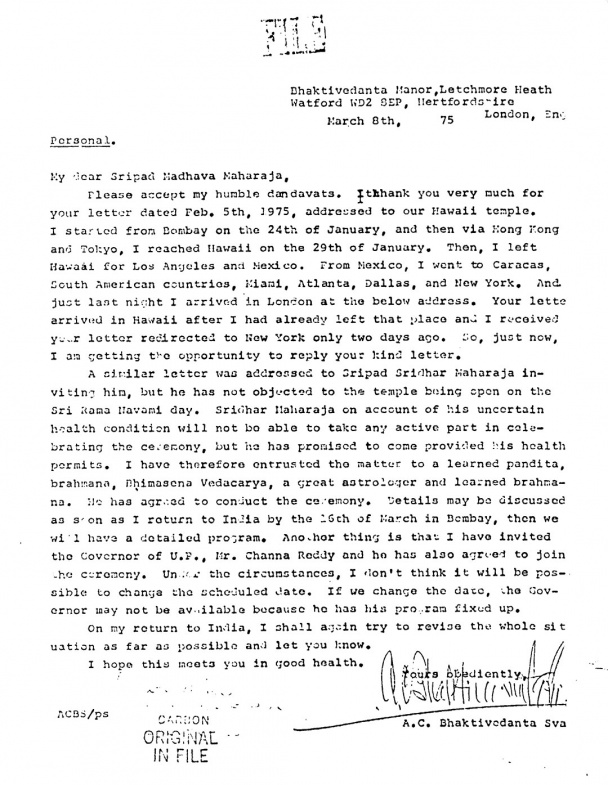 Please accept my humble dandavats. I thank you very much for your letter dated Feb. 5th, 1975, addressed to our Hawaii temple. I started from Bombay on the 24th of January, and then via Hong Kong and Tokyo, I reached Hawaii on the 29th of January. Then, I left Hawaii for Los Angeles and Mexico. From Mexico, I went to Caracas, South American countries, Miami, Atlanta, Dallas, and New York. And just last night I arrived in London at the below address. Your letter arrived in Hawaii after I had already left that place and I received your letter redirected to New York only two days ago. So, just now, I am getting the opportunity to reply your kind letter.

A similar letter was addressed to Sripada Sridhara Maharaja inviting him, but he has not objected to the temple being open on the Srim Rama Navami day. Sridhara Maharaja on account of his uncertain health condition will not be able to take any active part in celebrating the ceremony, but he has promised to come provided his health permits. I have therefore entrusted the matter to a learned pandita, brahmana, Bhimasena Vedacarya, a great astrologer and learned brahmana. He has agreed to conduct the ceremony. Details may be discussed as soon as I return to India by the 16th of March in Bombay, then we will have a detailed program. Another thing is that I have invited the Governor of U.P., Mr. Channa Reddy and he has also agreed to join the ceremony. Under the circumstances, I don't think it will be possible to change the scheduled date. If we change the date, the Governor may not be available because he has his program fixed up.

On my return to India, I shall again try to revise the whole situation as far as possible and let you know.