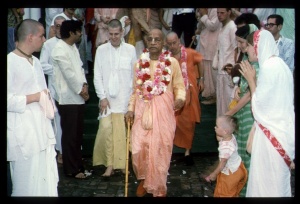 So Kavirāja Gosvāmī, after offering his respectful obeisances to Śrī Caitanya Mahāprabhu and describing the purpose of His incarnation, he is now trying to describe Nityānanda. Śrī-kṛṣṇa-caitanya prabhu-nityānanda. Pañca-tattva, one after another. . . First of all Śrī Caitanya Mahāprabhu, then Nityānanda Prabhu, then Advaita Prabhu, then Gadādhara, and then śrīvāsādi-gaura-bhakta-vṛnda. He is summarizing the obeisances to the Pañca-tattva. Now, what is the identification of Nityānandākhya-Rāma? Rāma, Balarāma, and Baladeva, Saṅkarṣaṇa—there are so many names of Śrī Baladeva. In the Upaniṣad it is said, nāyam ātmā bala-hīnena labhyo (Muṇḍaka Upaniṣad 3.2.4): "Self-realization is not possible without being strengthened by the mercy of Balarāma." Sometimes they take it foolishly, that "Without being very strong bodily, nobody can realize self." But that is not the fact. Nāyam ātmā pravacanena labhya na medhayā na bahunā śrutena. This is the Vedic injunction. That bala-hīnena means without being favored by Nityānanda Prabhu, Balarāma.

Balarāma is Nityānanda. That we know by following the footprints of mahājanas. Narottama dāsa Ṭhākura says, vrajendra-nandana yei, śacī-suta hoila sei, balarāma hoila nitāi: "Balarāma has appeared now as Nityānanda." So bala means strength, spiritual strength, and rāma means enjoyer. Iti rāma padenāsau param brahma ity abhidhīyate. Rāma means Para-brahman. Satyānande cid-ātmani. Ramante yoginaḥ anante (CC Madhya 9.29). Yogīs, they are also interested in enjoying life. There are different kinds of yogīs. Of all the yogīs, the bhakti-yogi, that is the best. That is said by Kṛṣṇa:

Yogīs, there are many yogīs, but the bhakti-yogi is the best because by bhakta-yoga only you can approach the Supreme Personality of. . . There is no other way. Jñāna, karma and haṭha-yoga, they can help little, but they are not competent to approach the Supreme Personality of Godhead. Kṛṣṇa says in the Bhagavad-gītā, bhaktyā mām abhijānāti (BG 18.55). If you want to know Kṛṣṇa, then karma, yoga, jñāna, these, although they can elevate you to some extent, but you cannot approach the Supreme Personality of Godhead by karma, jñāna and yoga. If you want to know Kṛṣṇa as He is, then you have to accept the path of bhakti-yoga. Kṛṣṇa says personally, bhaktyā mām abhijānāti yāvān yaś cāsmi tattvataḥ. And in order to attain this perfection of bhakti-yoga, you require strength from Balarāma, Saṅkarṣaṇa.

Rāma means who enjoys. So this word rāma is explained in the śāstra that one who is expert in enjoying eternal happiness, he is perfect yogī. Not flickering happiness. Flickering happiness. . . The yogīs are not interested in flickering happiness or material happiness. Material happiness is always flickering, temporary. That is not happiness, but we take it. Real happiness is when we enjoy life with Kṛṣṇa, rāma. That is real happiness. Ramante yoginaḥ anante satyānande. That is ananta. Ananta means unlimited. So our. . . We are seeking after ānanda. Ānandamayo 'bhyāsāt (Vedānta-sūtra 1.1.12). By our nature we want to be very blissful, always happy. That is our nature. And we can possess, revive our nature of eternal happiness, provided we try to get it in this human form of life. There is no difficulty if we follow the path enunciated by great authorities, mahājano yena gataḥ sa panthāḥ (CC Madhya 17.186). So Nityānanda Prabhu, Caitanya Mahāprabhu and Their disciples, they are all mahājanas, great personalities. If we follow their principles, then it is very easy. There is no difficulty. But difficulty is that we do not follow.

This Mahā-Viṣṇu, who is creating innumerable universes by breathing. . . Just like sometimes we breathe and there are some germs, small, we cannot see; in the same way, the universes in a small, minute form, they are coming out of the breathing of Mahā-Viṣṇu. That is kāraṇa-toya-śāyī, kāraṇa-udaka, Causal Ocean. That is beginning of creation. Then all the universes, they gradually develop into gigantic form. In the originally, it is coming out. We cannot understand. Sometimes we become surprised that "How such innumerable universes are being created by a person?" So the universe is not so big in the beginning. Just like our this body is not so big in the beginning of our body within the womb of our mother. It is not so big. It is very small, minute, and then it becomes just like a pea, and gradually the body develops. The same process is applicable to the universes. In the beginning, they are coming out of the breathing of Kāraṇatoyaśāyī Viṣṇu, and then gradually they are developing, bṛhannatvāt-jā, bṛhatvāt-jā. It increases gradually. That Kāraṇatoyaśāyī Viṣṇu is also Saṅkarṣaṇa.

And then Garbhodakaśāyī. The universes are created. Then, when they develop, then same Viṣṇu, Mahā-Viṣṇu, enters into each universe, and He creates an ocean. That is called Garbhodaka Ocean. And He lies down there on Śeṣa-Nāga, And then, from the navel, the lotus flower sprouts, and then Lord Brahmā is created. Then, after many years' tapasya, tapo, he understands how to create. In this way the whole creation of universes take place, Garbhodakaśāyī. And after creation of this universe, then same Viṣṇu, Garbhodakaśāyī, within this universe He creates His own Vaikuṇṭha where there is an ocean of milk. There are different kinds of ocean, we learn from śāstra. We have got experience of the salted ocean, but there are many other oceans, just like milk ocean, ghee ocean, oil ocean and yogurt ocean. There are. We get this information from the śāstra.

So the Mahā-Viṣṇu, first of all He enters in each universe as Garbhodakaśāyī. Then, within the universe, He creates His Vaikuṇṭha and lies down there—Kṣīrodakaśāyī. This Kṣīrodakaśāyī Viṣṇu is approached by the demigods when there is need of maintenance or for subsiding the disturbance by the demons. Then Brahmā, Lord Śiva and others, they go on the beach of this milk ocean and submits their appeal. Then the answer is given to Brahmā, and he informs to other demigods. This is the process. You'll find this later on. So payobdhi-śāyī and śeṣaś ca, Śeṣa, that is also incarnation of Viṣṇu. He is sustaining the body of Viṣṇu in different oceans, and He is serving the Lord Viṣṇu in so many ways. Śayyā, āsana, sitting place, bed, and upavīta, and clothes, garments—so many ways He is serving.

Now, all these different incarnation of Viṣṇu is summarized here by Kavirāja Gosvāmī that "All of them are partial expansion of Nityānanda," to understand what is Nityānanda Prabhu. The prakāśa-vigraha. . . Kṛṣṇa first. Then His prakāśa-vigraha, manifested form, a little difference in bodily feature, but the same powerful, that is Balarāma. And then, from Balarāma, Saṅkarṣaṇa, Pradyumna, Aniruddha, in this way, quadruple expansion. Then Nārāyaṇa, then another quadruple expansion, then from that quadruple, second manifestation of Saṅkarṣaṇa, all these different Viṣṇus, Kāraṇatoyāśāyī, Garbhodakaśayī, Kṣīrobdhiśāyī—in this way, expanding. Dīpārcir eva hi daśāntaram abhyupetya (Bs. 5.46). Just like you take one candle, then you lit up another candle, another candle, another candle. All these candles are equally powerful, but still, the calculation is, Kṛṣṇa is the first candle, Balarāma is the second candle. In this way, viṣṇutayā vibhāti—the expansion of Viṣṇu, innumerable.

Advaita acyuta anādi ananta-rūpam (BS 5.33). This Kṣīrodakaśāyī Viṣṇu is the person who is situated in everyone's, every living being's, heart. Īśvaraḥ sarva-bhūtānāṁ hṛd-deśe 'rjuna tiṣṭhati (BG 18.61). That īśvara, antaryāmī, who is existing in everyone's heart, that is Kṣīrodakaśāyī Viṣṇu. Not only within the heart of all living entities, but He is within the atom also. Aṇḍāntara-stha-paramāṇu-cayā. . . Paramāṇu. Paramāṇu means atom. In this way Viṣṇu expansions are there. It is inconceivable for us, but by the grace of Kṛṣṇa, we can partially understand from the description of the śāstras. Otherwise, we cannot imagine how these things can happen, but it happens. We have to accept. Śāstra-cakṣuṣaḥ. We have to see through the pages of śāstra. Otherwise it is not possible.

So if we want to know viṣṇu-tattva, if we want to know Kṛṣṇa, His exalted position, then here are the description of the śāstra. And if we take them as it is, without malinterpretation, without showing any extraordinary intelligence by us. . . It is not possible. We have to accept. Therefore the injunction is that you accept the statement of the śāstras. That is. . . Bhagavad-gītā also said, yaḥ śāstra-vidhim utsṛjya vartate-kāma-kārataḥ (BG 16.23): "If you do not follow the description of the śāstra, and if you manufacture something," then na siddhiṁ sa avāpnoti, "then you'll never get perfection." We have to follow the śāstra; otherwise there is no other alternative to understand the exalted position of Kṛṣṇa, how He expands in different forms, as Viṣṇu, as Nārāyaṇa. Sometimes they argue that Kṛṣṇa is incarnation of Viṣṇu. That is also truth. You'll find in Caitanya. . . Truth in this way, that when any incarnation comes, He comes through the Kṣīrobdhiśāyī Viṣṇu. But Kṣīrobdhiśāyī is partial expansion of Kṛṣṇa. The subject matter is very intricate, but if we follow the śāstra and accept it, then some clear conception we can have.