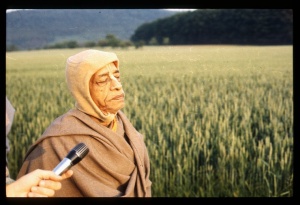 Prabhupāda: . . .although there is full arrangement for producing food, and because we are rogues and demons, nature will restrict supply. (break) But this machine will be stopped as soon as the increase of population of rogues and demons. The machine is there already. Mūḍhā nābhijānāti mām ebhyaḥ param avyayam. The background is Kṛṣṇa. Mayādhyakṣeṇa (BG 9.10), under His order. He says, "Don't supply here." Mayādhyakṣeṇa. The supply is stopped. That they do not know. They are making scientific research. What scientific research? Bring water. There is so much water. Bring that water, distill it and throw. Are you such great scientist? And by God's arrangement the sun is there, evaporates the water from the sea, and it becomes purified without any salt, and it is extravagantly thrown on the land. And the same water again flowing down through the river in the sea, the water is reserved. Nothing is lost.

Brahmānanda: The scientists have been able to artificially take the salt out of the ocean water to make it fresh for irrigation, but it is very, very costly. It requires a great deal of energy.

Prabhupāda: That is their defect. They theorize, but when it is practically going to be done, "No money. Get taxes." They will levy tax, and the tax will be divided amongst themselves, that's all.

Gopāla Kṛṣṇa: Especially now all the governments all over the world are broke. They have no money.

Prabhupāda: There will be very, very big chaos, this godless civilization. And it is distinctly said, "There will be no grain, no sugar, no milk." These things will be stopped. Eat your sons and daughter. You are very much fond of eating meat. Eat your son. They will do that. I think they are doing now. You know that?

Gopāla Kṛṣṇa: In Vietnam, Śrīla Prabhupāda, I heard that the North Vietnamese and Vietcong were killing. . .

Prabhupāda: No, no. Now they are killing child in the womb. That killed child is taken in the hotel.

Brahmānanda: There was a report that that was going on in New York.

Prabhupāda: It is going on in London, in all civilized countries, advanced civilization.

Guest: And they say that there was report in Bombay also.

Guest: One restaurant near Metro was serving that type. And one man suffering from leprosy was given only about one month to live, and "If you want to enjoy, you enjoy. But if you want to get cured, you have to eat human flesh." "I don't eat human flesh." So he started eating anywhere. And he liked one place very much, and he started eating for one month at that particular place. And eventually he was cured. Then a police report was found out that they were serving human flesh by inviting very poor people from the South India for washing the dishes at night, giving five rupees. When they come, they kill him and serve in the morning.

Prabhupāda: That was being done long, long ago in a Chinese house in Calcutta. They'd call hawker.

Guest: Hawker. And kill him up.

Guest: It is a very confidential report. The government will not publish it. (break)

Guest: No, that milk is medicinally used for whooping cough. Anybody suffering from whooping cough, they have to take this camel's milk. And any children who do not increase their height, they are given this milk in winter. So height is automatically increased. They become like camel eventually. (laughter) Tall, I mean. I don't mean the. . . in Western way. According to Āyurvedic principle, every animal have got a particular method of curing particular disease.

Guest: Now, Sitalamata, she is always traveling on a she-ass. Now she-ass's milk is very good for smallpox. If you take one spoon every day for three days in a year, one does not get an attack of smallpox. Very simple. Ideologically. . .

Prabhupāda: Her carrier is ass.

Prabhupāda: And the carrier of Ganeṣaji. . .

Prabhupāda: Mouse. So, you have to eat that also, to get success?

Guest: No, no, not success but intelligence, I think.

Prabhupāda: No, Ganeṣaji is meant for giving you success.

Prabhupāda: So, then you have to eat rat?

Guest: No, not rat. Milk. We are talking about milk product only.

Prabhupāda: So, milk of the rat?

Guest: If the scientist can extract it, then well and good. Because a very such small mouse.

Prabhupāda: But they must have milk. Every lady animal has got milk.

Guest: No, but what I think a rat is responsible for, what do you call, spreading cholera. So rat must be supplying the medicine for cholera also. Whenever cholera is there, rats are there.

Prabhupāda: So that means those who want success, they should eat the milk of rat. (chuckles)

Guest: Yamarāja is going on buffalo. So buffalo milk also we are not recommending.

Prabhupāda: No. Anyone who wants to go very soon to Yamarāja, he can drink buffalo milk. Or it may be that if you drink buffalo milk, the Yamarāja will not touch you. (laughter) The other side may be taken. (break) . . .in the morning take water from the river, evacuate, then wash their hands and take nice bath. And one jug water brings at home. Then everything, water problem, is solved.

Guest: But now they've put in Mathurā, refinery at Mathurā to pollute Yamunā River. And again problem will come after four or five years.

Guest: Except the serpent. They eat their children. There are too many of them so they eat at least half or three-fourths, don't allow the serpent population to grow. Because after the child must be hungry, and she must. . .

Prabhupāda: Still, those who live, they depend on mother.

Guest: Actual, the serpent because serpent government, he says.

Prabhupāda: Yes. Serpent mother also, Kali-yuga. (break) . . .they are keeping, but it is not possible to give them food by purchasing. They are taking food from the street. Similarly, the poor man keep a cow. It is not possible to purchase food for the cows. So maintain in this way, so, by natural food. And in Germany I have seen. They are not given extra food. They are living by pasturing ground. That should be arranged. They should get food from the ground, not that we have to purchase food for them. Then you cannot maintain.

Puṣṭa Kṛṣṇa: We just recently went to Govardhana Hill. Several years ago the grass at Govardhana Hill was very nice and long and green. This year, though, it didn't seem so green. It was very brown and. . .

Prabhupāda: Yes, from Kṛṣṇa's time the Govardhana grass was being supplied to the cows. Therefore Kṛṣṇa recommended, "Better worship Govardhana Hill. Why you are going to Indra?"

Puṣṭa Kṛṣṇa: So that means that it is possible for long green grasses to grow in this area.

Guest: In Gujarat now the same problem is there and they are digging well, five-acre well, just we have dug at Māyāpur, and collecting water. Rainwater is collected that way. So here also it can be done for a small farm. (break)

Prabhupāda: . . .saṅkīrtana, then water will come. You haven't got to do anything. Otherwise the words of Gītā will be false. Yajñaiḥ. . . Yajñād bhavanti parjanyaḥ. The formula is there. You perform yajña and the water will be supplied. They are not performing yajña.

Dhananjaya: So then it's very important to perform twenty-four-hour kīrtana here.

Devotee (2): From that, then, the rains will be produced.

Prabhupāda: Yes. But we should not chant for rain. That will automatically come. But you should chant for pleasing Kṛṣṇa.

Makhanlal: There's some rumors that there will be a drought in the United States, a very severe drought.

Tripurāri: But by the devotees chanting they would never have to. . .

Makhanlal: Even if there was drought for the nondevotees, the devotees would, automatically wouldn't have to worry about such a thing.

Prabhupāda: (break) . . .stopped, then your whole business stop. Imagine if these hills were green. How much foodstuff would have been available both for the animal, for the man. All dry, all dry. People should immediately accept this chanting to solve this problem. (break) And the yajña means yajñaiḥ saṅkīrtana.

Gopal Kṛṣṇa: They think they have better things to do.

Puṣṭa Kṛṣṇa: Ātma-sainyeṣu asatsv api. They are depending on so many other things besides Kṛṣṇa.

Guest: If some definite example is there, then they will immediately copy. See, they are copy-minded. If suppose we open up a temple here and the conditions here improve, automatically everybody'll take up. So we will see next year. Automatically when things are done by copying, they would like to go by the copy method, not by experimentation. So if our temples are successful in Māyāpur and Hyderabad and everywhere, farms are attained, and if they are able to produce better things, they will understand, "Oh, because of the Kṛṣṇa consciousness, people are becoming more prosperous." Automatically they will come therefore.

Prabhupāda: Yes. Yes, that is also nice. (break) We have no factory; we have no business.

Guest: People are wondering now. They are asking me.

Prabhupāda: So why they do not imitate this?

Guest: No, they will imitate. Because that's why we are going to Ahmedabad to that we can give the. . .

Prabhupāda: Yes, if that is, they want to see practically, so practically we have got 102 branches and maintaining so many men, but we have no business.

Prabhupāda: Yes. Even in America they are surprised. In our Los Angeles temple our devotees are inquired by the store men that "How you are maintaining? You do not work. You have got so many cars. You are eating nicely. You live in very nice building. How you are provided?" They are surprised.

Tripurāri: They think we are parasites, though.

Guest: Yes, that is another impression, but then we have to clear it up.

Prabhupāda: All right, parasite or not, but we are not working and getting our food.

Tripurāri: They say because we're begging from them. They are buying for us.

Prabhupāda: So why don't you stop? You are forced to give us. You stop. If we are begging from you, you stop it. But you cannot stop. (Laughter) You have to give us. We are showing that we are beggar, but we are taxing, exacting tax from you. You can think whatever you like.

Makhanlal: The government is also begging.

Prabhupāda: Yes. No, if we are begging, then you stop it. That is in your hand. We are not depending on you. (end)