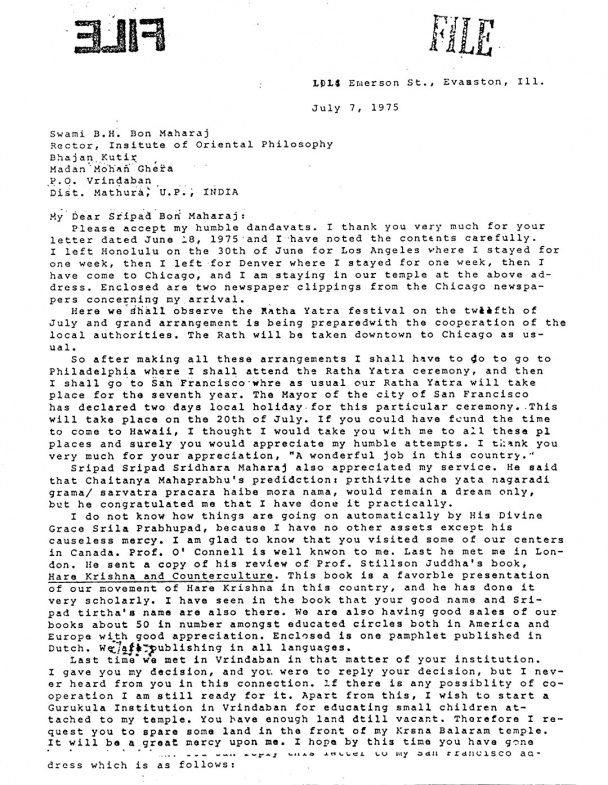 My Dear Sripad Bon Maharaj:
Please accept my humble dandavats. I thank you very much for your letter dated June 18, 1975 and I have noted the contents carefully. I left Honolulu on the 30th of June for Los Angeles where I stayed for one week, then I left for Denver where I stayed for one week, then I have come to Chicago, and I am staying in our temple at the above address. Enclosed are two newspaper clippings from the Chicago newspapers concerning my arrival.
Here we shall observe the Ratha Yatra festival on the twelfth of July and grand arrangement is being prepared with the cooperation of the local authorities. The Rath will be taken downtown to Chicago as usual.
So after making all these arrangements I shall have to go to go to Philadelphia where I shall attend the Ratha Yatra ceremony, and then I shall go to San Francisco where as usual our Ratha Yatra will take place for the seventh year. The Mayor of the city of San Francisco has declared two days local holiday for this particular ceremony. This will take place on the 20th of July. If you could have found the time to come to Hawaii, I thought I would take you with me to all these places and surely you would appreciate my humble attempts. I thank you very much for your appreciation, "A wonderful job in this country."
Sripada Sripada Sridhara Maharaj also appreciated my service. He said that Chaitanya Mahaprabhu's prediction: prthivite ache yata nagaradi grama/ sarvatra pracara haibe mora nama, would remain a dream only, but he congratulated me that I have done it practically.
I do not know how things are going on automatically by His Divine Grace Srila Prabhupad, because I have no other assets except his causeless mercy. I am glad to know that you visited some of our centers in Canada. Prof. O'Connell is well known to me. Last he met me in London. He sent a copy of his review of Prof. Stillson Judah's book, Hare Krishna and Counterculture. This book is a favorable presentation of our movement of Hare Krishna in this country, and he has done it very scholarly. I have seen in the book that your good name and Sripada tirtha's name are also there. We are also having good sales of our books about 50 in number amongst educated circles both in America and Europe with good appreciation. Enclosed is one pamphlet published in Dutch. We are publishing in all languages.
Last time we met in Vrindaban in that matter of your institution. I gave you my decision, and you were to reply your decision, but I never heard from you in this connection. If there is any possibility of co-operation I am still ready for it. Apart from this, I wish to start a Gurukula Institution in Vrindaban for educating small children attached to my temple. You have enough land still vacant. Therefore I request you to spare some land in the front of my Krsna Balarama temple. It will be a great mercy upon me. I hope by this time you have gone [text missing] reply this letter to my San Francisco address which is as follows: