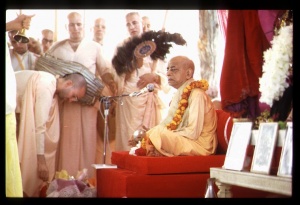 Jayatīrtha: It says, "Forgive me if this story is not well-written. I am a woman. My brain weighs less than a man's, and I am not equal in intelligence." So she admits. "His Divine Grace A. C. Bhaktivedanta Swami Prabhupāda, the seventy-seven-year-old founder of the International Society for Kṛṣṇa Consciousness, said so Wednesday. The Society is dedicated to peace in the world through love of God and relinquishment of all things material. The Swami spoke seated cross-legged on an expensive looking cushion surrounded by fresh flowers, microphones and burning incense in a conference room he rented at the Sheraton Chicago Hotel. He is in town for a Kṛṣṇa parade at 1:30 p.m., Saturday, down State Street, in which he will ride on a flower-bedecked float. He then will fly to Philadelphia for more celebration and philosophical chats. He looked occasionally at his gold watch as he explained his life philosophy. His adoring disciples, five men, knelt at his side. 'The MAN,'" capital M-A-N, "he said, 'who loves God, controls his sense, is clean inside and out, is simple and tolerant and uses knowledge he has acquired in practical life. . .'"

Jayatīrtha: No, "and tolerant." "'Such MEN,'" capital M-E-N again, "he said, 'are first-class citizens and should be advisors to the world. Second- and third-class MEN have not found God and should be administrators and workers.'" Not exactly right. "He spoke thirty minutes and never mentioned women. I asked how women fit into his system. 'Women,' he said, 'is not equal in intelligence to man. Man's brain weighs sixty-four ounces; women's weighs thirty-six ounces. It is just a fact.' He continued, 'Women are meant to assist men. That is all.' He said women do not figure in his class system except as daughters or wives. 'An unmarried woman presumably is classless. Is that,' asked a male reporter. . ."

Jayatīrtha: "'Is that,' asked a male reporter, 'what is wrong with Mrs. Indira Gandhi?' The Swami hedged." Then actually they made a mistake. "'I cannot say. I would be arrested.'" That was actually a misquote. (Prabhupāda laughs)

Brahmānanda: Well, it's the idea, though.

Jayatīrtha: Yeah. "The Swami now lives in Los Angeles, and he trains his followers there. Their income is from sales of his books, magazines and incense. He says he has about ten thousand followers. 'We do not have so many,' he said. . ."

Prabhupāda: The inner meaning is there: "I shall be arrested."

Brahmānanda: Yes. (laughs) That shows what is the position.

Jayatīrtha: "He said he has about ten thousand followers." Quote: "'We do not have so many,' he said, 'it is hard to find a first-class man.'" And then she says. . .

Prabhupāda: Therefore without first-class man, nobody can become my disciple.

Jayatīrtha: Then she says, "It's a pity half the population are women."

Jayatīrtha: "It's a pity half the population are women."

Prabhupāda: I didn't say half the population. . .

Jayatīrtha: That's what she said. In other words. . .

Jayatīrtha: . . .that half of the people are disqualified already because they're women. It's not so bad.

Prabhupāda: No, no, it is not bad. It is good. Now our policy should be that at Dallas we shall create first-class man, and we shall teach the girls two things. One thing is how to become chaste and faithful to their husband, and how to cook nicely. If these two qualifications they have, I'll take guarantee to get for them good husband. I'll personally. . . Yes. These two qualifications required. She must learn how to prepare first-class foodstuff, and she must learn how to become chaste and faithful to the husband. Only these two qualification required. Then her life is successful. So try to do that.

Prabhupāda: Ordinary education is sufficient, A-B-C-D. This is all nonsense, so big, big, sound education, and later on become a prostitute. What is this education? (laughter) To make them prostitute, it doesn't require education. (break) Yesterday we saw in the television how these rascals are wasting time, talking nonsense. There was nothing valuable talk. Foot . . . No, no, hand . . . What is that? Handprint? And the addicted murder? That was the case? (break) Within two weeks, two divorces.

Prabhupāda: . . .in the Dallas there is no problem. Educate the girls how to become faithful, chaste wife and how to cook nicely. Let them learn varieties of cooking. Is very difficult? These two qualifications, apart from Kṛṣṇa consciousness, materially they should learn. There are many stories, Nala-Damayantī, then Pārvatī, Sītā—five chaste women in the history. They should read their life. And by fifteenth, sixteenth year they should be married. And if they are qualified, it will be not difficult to find out a nice husband. Here the boys, they do not want to marry because they are not very much inclined to marry unchaste wife. They know it, that "I shall marry a girl, she is unchaste." What do you think?

Prabhupāda: This is psychology. If woman is chaste, even though she is not very beautiful, she will be liked by the husband. So train them in that way: very chaste, faithful wife and knows how to cook very nicely. Other qualification, even they haven't, that's all right. And Kṛṣṇa consciousness is being trained up. Then there will be no difficulty. And boys should be first-class man. Then our Gurukula will be successful. What do you think? Am I right?

Satsvarūpa: Śrīla Prabhupāda, you were saying that in our Society the women shouldn't cook privately for their husbands.

Satsvarūpa: You were saying that the women. . . that everyone should take the Deity's prasādam. But it sounds like the women are being trained to cook, so. . .

Prabhupāda: No, no, no. No, no. The thing is that Deity or at home, she must be very first class cook. That is wanted.

Prabhupāda: That is according to convenience. If possible, they can take prasādam in the temple. If not possible, they must cook. But she must be first-class cook. That is wanted, either in the temple or outside. In India still, eighty percent, ninety percent they are very happy in their family life, never mind one is poor or rich, because the wife knows these three things: to remain chaste and faithful to the husband, and she knows how to cook nicely. (pause) (hums) And women and men should live separately. That is also essential. Butter and fire must be kept apart. Otherwise the butter will melt. You cannot stop it. (pause) The drama was a drug-addicted boy killed some friend?

Brahmānanda: It was the sailor who was killed?

Prabhupāda: In that television?

Jayatīrtha: I came in late.

Prabhupāda: No, no, the television. The lawyers were trying to prove handprints and so many things. The subject matter was that a drug-addicted boy killed a friend. Hmm? (pause) What is this, some stool?

Jayatīrtha: This? It appears to be a leaf of some kind.

Devotee: Śrīla Prabhupāda, in a purport in the Śrīmad-Bhāgavatam you say that even fifty years ago in India the householders had separate apartments for the men and women.

Devotee: Separate quarters in the apartment. And the husband would not see his wife during the day?

Makhanlāl: So is this the standard we should develop in our movement?

Prabhupāda: Yes, that is good. The example is the butter and fire should be kept separate as far as. . . Otherwise the butter will melt. Mātrā svasrā duhitrā vā (SB 9.19.17). The butter and. . . means man and woman. A man is butter, and woman is fire. So this is restricted even the man happens to be father, brother or son. Mātrā svasrā duhitrā vā. People cannot think of sex impulse in the presence of daughter, mother or sister. But śāstra says, "No. There is possibility." Mātrā svasrā duhitrā vā na vivaktāsane vaset: "They should not be kept. . . should not sit together." Then people may say, "This is impossible. Maybe some tenth-class rascal may be attracted." So the next line says, "No," vidvāṁśāpi karṣati, "it is not the question of tenth-class rascal; even first-class learned, he may be attracted." Not to speak of tenth-class rascal, but first-class learned may be. Not may be; it is a. . . Balavān indriya-grāmo vidvāṁśāpi karṣati: "The senses are so strong that it can mislead even the most learned scholar."

Prabhupāda: Yes, to his daughter. Just see. There is the example. Lord Śiva was attracted by the Mohinī-mūrti. Caitanya Mahāprabhu said that "Even if I see a wooden woman, I become attracted." (laughs) He is giving this from His. . . to teach us that it is possible. Hmm. So shall we go now? (break)

Prabhupāda: . . . takes my advice, then I can keep her on the post and she can do greatest service to India immediately. Immediately whole public will be her support.

Brahmānanda: What would be your advice to her?

Prabhupāda: My first step will be to capture all the hoarders and distribute the grains free. Immediately public will be obliged. There are immense food grains; they are simply hoarded. They are not selling without good price. This is going on. Immediately she can capture the public. And some of the hoarders should be hanged. . .

Prabhupāda: . . .so that in future nobody will hoard. People are hungry. And she says she has got some program, garibi hatao, "Drive away the poverty." This is the point. If she can supply all consumer goods for the time being free to the poor, then immediately the whole population will be after her. And the hoarders should be exemplary punished. Shoot them, that's all. Then nobody will hoard. But to remain the dictator she requires spiritual knowledge. Otherwise it will be another disaster. If she wants to remain dictator, then she must be a spiritual man. She must become a Vaiṣṇavī.