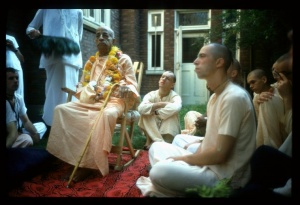 Nitāi: "The questions asked of the Yamadūtas by the Viṣṇudūtas are: What is the process of meeting out punishment to others? Who is actually a candidate to be punished? Are all karmīs engaged in fruitive activities fit to be punished, or only some of them?"

So first question was, brūta dharmasya nas tattvaṁ yac ca adharmasya lakṣaṇam (SB 6.1.38). When there is some vicāra, judgment, it must be done very nicely. A criminal is judged before the magistrate. He is taken just to make proper judgment, "Whether this man is punishable? He committed some criminal activities." The circumstances, the condition of the mind—everything should be judged. This is called judgment. So who is punishable? Deśa-kāla-pātra. There is consideration, deśa-kāla-pātra. Deśa means situation, and kāla, time, and pātra, and the subject. Just like a child, he takes one fruit here. So he is not punishable. According to Vedic system, a child, a woman, a brāhmaṇa, a cow and a saintly person, they are not punishable. Cow, woman, saintly person, brāhmaṇa and child—they are beyond all laws. Even they commit some. . . They do not do. They have no criminal purpose. Formerly the women were trained up in such a way, very chaste and obedient. So they had no chance to commit any offense. And brāhmaṇas, they are also trained up. Śamo damaḥ satyaṁ śaucam. . . (children making noise)

Sudāmā: Take the children out.

Bahulāśva: All the children should go out.

Prabhupāda: No, that's all right. (some devotees say "Jaya!" and applaud) So, children are not punishable. (laughter, more applause) Neither the women. (more applause, laughter) Hmm. But don't take advantage. (laughter) And here we have got these brāhmaṇas, saintly persons, women and children. So who is to be punished? (laughter) Yes. Kathaṁ svid dhriyate daṇḍaḥ. So the judge must know who is to be punished. That is judgment. Kathaṁ svid dhriyate daṇḍaḥ sthānam. Deśa-kāla-pātra: according to time, according to circumstances, according to the subject, everything scrutinizingly judged, not whimsically. Nowadays it is the time for emergency. Anyone can be punished without any judgment. But this is not good position.

Then daṇḍyāḥ kiṁ kāriṇaḥ sarve. Kāriṇaḥ means fruitive actors, those who are working for getting some profit. So sometimes with getting profit we make some undesirable activities which is called black market. So that is punishable. There are system. . . Of course, I cannot quote from where, but it is the system that a merchant, highest profit he can take for exchanging: not more than twenty-five percent. That is the highest. If one merchant takes more than twenty-five percent profit, then he is punishable. This was the system. So the kāriṇaḥ. . . So we are all workers. So somebody is working for his personal profit, and somebody is working for the profit of Kṛṣṇa, it appears almost similar. A ordinary man is selling some newspaper, and our man selling the magazine. It looks the similar thing, but it is not similar; it is different. Therefore, if a newspaper seller creates some disturbance on the street, the police can punish, but when one is selling Back to Godhead, he is not punishable. (laughter) This is the difference. But nowadays these rascals, they do not know whom to punish, whom not to punish. They take, "All right, you are selling Back to Godhead. You must come police custody." So our are not punishable, although doing the same thing. This is judgment.

So the Yamadūta, they are also servant of very exalted personality, one of the authority. So they are not lacking in knowledge, by the grace of their master. So the first thing they said, veda-praṇihito dharmo hy adharmas tad-viparyayaḥ (SB 6.1.40). Dharma and adharma, religious principle and not religious principle, nonreligious principle—how to discern. The book is there, Veda. We have to consult the Vedas. There are so many Vedic literatures: four Vedas, then Upaniṣad, 108 Upaniṣad, then philosophy, Vedānta-sūtra, all summarized. Then explanation of Vedānta-sūtra, or Śrīmad-Bhāgavatam. Bhāṣyaṁ brahma-sūtrāṇām. Then there is Rāmāyaṇa, there is Mahābhārata, immense literature, full of Vedic literature. So one should try to understand this literature. They are meant for the human being. Veda-praṇihito dharmaḥ. If one wants to be religious. . . Religious means that is the beginning of human life. If one is not religious, then he is animal. Dharmeṇa hīnāḥ paśubhiḥ samānāḥ. So in order to make a person perfectly religious, there are so many Vedic literatures. So who is taking care of it? Nobody is taking care of. Therefore, at the present moment, kalau śūdra-sambhavaḥ. Śūdra means equal to the animal. Tulasī dāsa has classified, dhol guṇar śūdra paśu nārī, ihe sab sasan ke adhikārī. So women will be sorry, but he has classified in that way. Anyway. . . So nobody is taking care of the Vedic literature. Therefore they do not know what is right, what is wrong. Dharma, dharma means right and wrong.

That is also explained in the Bhagavad-gītā: tān ahaṁ dviṣataḥ krūrān kṣipāmy ajasram andha-yoniṣu (BG 16.19). Those who are asuras, demons, trying to defy the existence of God, Kṛṣṇa, Kṛṣṇa is putting him in such circumstances, in such family, in such society, in such community, in such country that he will have no opportunity to know Kṛṣṇa. Tān ahaṁ dviṣa. . . Because he is envious of Kṛṣṇa, wants to forget Kṛṣṇa, so Kṛṣṇa is putting him in such circumstances. And one who is little eager to know Kṛṣṇa, then Kṛṣṇa is giving the intelligence.

Everything is said there. Teṣāṁ satata-yuktānām. Anyone who is twenty-four hours engaged in. . . How he is engaged? Bhajatām: simply for bhajana. Bhajana means worshiping, "How to worship Kṛṣṇa." Satata-yuktānām, and twenty-four hours anxious, "How to serve Kṛṣṇa? How to serve Kṛṣṇa?" To become mad after Kṛṣṇa, such person. Just like Caitanya Mahāprabhu says, śūnyāyitaṁ jagat sarvaṁ govinda-viraheṇa me (Śikṣāṣṭaka 7): "I see everything vacant being separated from Govinda." This is called love. So, of course, it is not possible to come to that position like Caitanya Mahāprabhu. That is mahā-bhāva, mahā-bhāva. It is not for any human being to come to that stage. But Caitanya Mahāprabhu has shown how to become mad after Kṛṣṇa by His life when He was in Jagannātha Purī, Caitanya. At night He would go out and fall down on the sea or somewhere. Nobody knows. The door was closed, and still, He would get out and go, and, "Where is Kṛṣṇa? Where is Kṛṣṇa?" Then His assistants, secretaries, would go out and find out Him. So for eighteen years He was in that way in Jagannātha Purī. That is called mahā-bhāva.

So it is not possible for human being. But at least, not mahā-bhāva but bhāva, that we can. . . Bhāva. Tato bhāvaḥ.

So we should follow that principle, that we should not be packed up. Sometimes we find in Vṛndāvana they say, "No, no, I have taken vow. I am not going out of Vṛndāvana." Of course, the Gosvāmīs did not get out of Vṛndāvana, but they preached. Nānā-śāstra-vicāraṇaika-nipuṇau sad-dharma-saṁsthāpakau. They were always engaged in writing books, nānā-śāstra, various śāstra, scripture, always studying, and taking essence of the śāstra and presenting to the world people. Why? Sad-dharma-saṁsthāpakau: just to establish real religious principle, nānā-śāstra-vicāraṇaika-nipuṇau, with scrutinizing thinking over and giving to the people. This is Gosvāmīs' business. Nānā-śāstra-vicāraṇaika-nipuṇau sad-dharma-saṁsthāpakau. Why? Lokānāṁ hita-kāriṇau: for the benefit of the whole human society. Lokānāṁ hita-kāriṇau mānyau śaraṇyau. Therefore one should take shelter of the Gosvāmīs. That is Gosvāmī.

So here, veda-praṇihita, the Veda. The Vedic literature, that is dharma, no manufacturing. Nowadays it has become a fashion, this. . . So Vedas, that is beginning. Millions. . . Nobody can give any description, since when the Vedas are coming down by the paramparā system. But after this Vedic period, so many religious system has come out. Up to five thousand years before, the Vedas were accepted all over the world, Vedic civilization. Then later on, gradually, they, the Christianity has come, the Muhammadanism, Islamism has come, Buddhism come, and now there are so many other, this samāja, that samāja, this religion, this religion, this religion. Because that means people are getting out of the touch of the Vedic civilization.

So this Kṛṣṇa consciousness movement means we are trying again to bring them to this Vedic civilization. Here it is stated, veda-praṇihito dharmaḥ. If you take to the Vedic principles of life, then you become religious. And what is that Vedic principle? Vedaiś ca sarvair aham eva vedyaḥ (BG 15.15). Kṛṣṇa says, "Vedic principle means to know Me, Kṛṣṇa." Vedaiś ca sarvaiḥ. Veda-praṇihito dharmaḥ. And what is Veda? Vedaiś ca sarvair aham eva vedyaḥ. So. . . "But there is Vedānta?" Yes. Vedānta-kṛd vedānta-vid aham: "I am the compiler of Vedānta, and I know what is Vedānta." So whatever Kṛṣṇa says, that is Vedānta. And other so-called Vedāntists, they are nonsense. They do not know what is Vedānta. Here is. Kṛṣṇa says, vedānta-vit: "I know what is Vedānta." "Why You know?" Vedānta-kṛt: "I have compiled Vedānta." In the incarnation of Vyāsadeva, Vyāsadeva incarnation, Kṛṣṇa-dvaipāyana Vyāsa. . . Mahā-muni-kṛte. Mahā-muni, the great sage, Vyāsadeva, is incarnation of Kṛṣṇa. So he has compiled Vedānta-sūtra. Therefore he knows what is Vedānta. And because Vedānta is being misinterpreted by rascals, therefore Vyāsadeva personally has commented on Vedānta-sūtra by writing Śrīmad-Bhāgavatam. Therefore he begins Śrīmad-Bhāgavatam with the first aphorism of Vedānta, janmādy asya yataḥ anvayād itarataś ca artheṣu abhijñaḥ sva-rāṭ (SB 1.1.1).