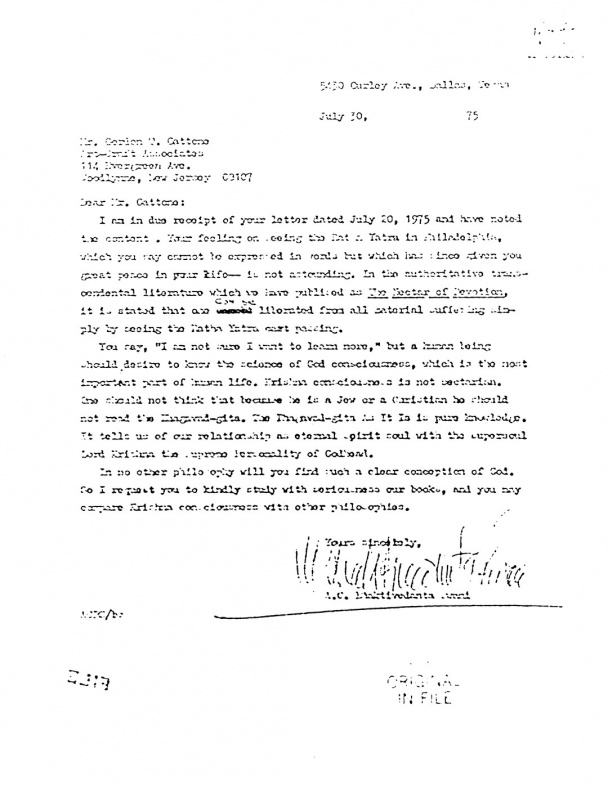 Dear Mr. Gattone:
I am in due receipt of your letter dated July 20, 1975 and have noted the contents. Your feeling on seeing the Ratha Yatra in Philadelphia, which you say cannot be expressed in words but which has since given you great peace in your life—is not astounding. In the authoritative transcendental literature which we have published as The Nectar of Devotion, it is stated that one can be [handwritten] liberated from all material suffering simply by seeing the Ratha Yatra cart passing.
You say, "I am not sure I want to learn more," but a human being should desire to know the science of God consciousness, which is the most important part of human life. Krishna consciousness is not sectarian. One should not think that because he is a Jew or a Christian he should not read the Bhagavad-gita. The Bhagavad-gita As It Is is pure knowledge. It tells us of our relationship as eternal spirit soul with the supersoul Lord Krishna the Supreme Personality of Godhead.
In no other philosophy will you find such a clear conception of God. So I request you to kindly study with seriousness our books, and you may compare Krishna consciousness with other philosophies.