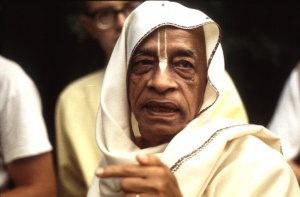 Prabhupāda: This side is going to be constructed.

Girirāja: We have to get the plan sanctioned first of all.

Prabhupāda: It is not sanctioned?

Girirāja: Oh. Well, we were considering demolishing this one.

Saurabha: Well, we have to have a certain amount of garden space, and according to the master plan this is supposed to be garden. Otherwise we're not allowed to build any other building there.

Prabhupāda: No. Then, above that, that side we shall build.

Prabhupāda: Yes. That, big. . . Here you can simply have one story more. And what about this land?

Saurabha: This is used now for storing sand. The next land or this?

Prabhupāda: No, no. This.

Saurabha: This will be garden also, but now we keep for storing, because we need that for sand here.

Gopāla Kṛṣṇa: If we have to add a second floor there, we can make it a BBT warehouse, exactly as per your directions.

Prabhupāda: And why not others? BBT warehouse, there are so many.

Gopāla Kṛṣṇa: Well, a big room will be very good, so when we construct that, we can have a big hall.

Gopāla Kṛṣṇa: Yes. A big hall, like in Los Angeles they have, where we can have shelves and. . .

Saurabha: The slab is not strong enough to have so much weight on it.

Girirāja: Mr. Menon, who has a flat on the ground floor, he is willing to shift upstairs if we want to trade.

Gopāla Kṛṣṇa: Let's have a look at his apartment today.

Prabhupāda: So, you can make down.

Prabhupāda: Yes. That can be done.

Gopāla Kṛṣṇa: Actually, down will be better for warehouse, because then you don't have to carry the books two flights down.

Gopāla Kṛṣṇa: And when a shipment comes it is easier to put it inside.

Prabhupāda: That's all right. Let us first of all construct. Then we can consider. Dogs cannot enter anymore. Now they enter. Hare Kṛṣṇa. (break) No. I'm not feeling very well.

Dr. Patel: Then I think something should be done for you. (laughs)

Prabhupāda: Hare Kṛṣṇa. So how many stories this building?

Prabhupāda: Eh? How many we are having?

Saurabha: We have . . . Well, the height would come as same as that. This is the limit now. They don't allow any higher building.

Girirāja: We could have had an extra story, but since the ground floor will be lounge and public gathering place, so we're making a little higher plinth and a higher ceiling.

Prabhupāda: Never mind. Do it nicely. And we cannot make garage like that? Hmm?

Saurabha: Yes, we can make. How many garages do you want?

Prabhupāda: That we shall see.

Saurabha: The difficulty is there's a law that so much garden we have to make, and each garden has to be minimum 4,000 square foot, so it has to be one particular area. And our land has been divided in so many small pieces, so we have somewhere to make a big garden. Then everywhere else we can build.

Prabhupāda: Do. You have got enough space.