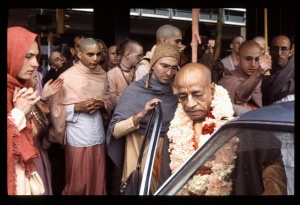 So, the rule is that in the morning for our foreign students we have preaching sessions from . . ..

Devotee: It's all right in Hindi.

Between 7.30 to 8.30 in the morning we present a lecture in English, and in the evening from 7.30 to 8.30 we try to speak in Hindi. I do not have much practice speaking in Hindi but I am Indian so I can speak a little.

So, before I speak on this Bhagavad-gītā verse, I would like to share some good news with you, that this temple that you all say is a very beautiful one, the reason behind this Śrīmān Kāṣīrāmjī Sarāf's and his wife, Śrīmati Gītā Devī. And when I first came to Vṛndāvana in 1971, this gentleman on his own accord proposed to donate this land to me. Then by the the Supreme Person's will, the donation was done and at that time I did not have any money also. Anyway by begging all over the world, at least fifty lakh rupees has been spent on this.

At that time Kāṣīrāmjī had kept some part of the land in the front for his own use but after seeing this temple he was very happy and he has said, "This land also belongs to you. Use this land as you want, it is your's." On that land we are now going to make a gurukula. And the expenses incurred in building this gurukula will be met by Viṣvāmbhar Nāthjī Agarwal, who is sitting next to me. He will give at least one lakh rupees, and may give more also. I will start the gurukula tomorrow. This Kṛṣṇa consciousness movement, you all know something about this already. We are preaching Lord Kṛṣṇa's name all over the world. The other name for this is Hare Kṛṣṇa movement.

So, big big scholars are writing books and articles about this movement. (English) Professor Judah from the Berkeley University has written a big book 'Hare Krishna and Counterculture' - very scholarly book. (Hindi) Similarly, this movement is being slowly liked by everyone. And these are the words of Caitanya Mahaprabhu, "pṛthivīte āche yata nagaradi grāma, sarvatra pracāra haibe mora nāma" (Śrī Caitanya Bhāgavata - Antya-khaṇḍa 4.126).

This was His prophecy that in all the villages and towns all over the world, towns etc., there will be preaching all over and it is happening also. They are accepting Indian culture with great enthusiasm. We will discuss this later on. Let us talk about the Supreme Lord's pastimes now, as today is His appearance day also. We should discuss something on that.

In three or four places this word "tattva" has been used. In the first place the Supreme Lord has said: "Janma karma ca me divyam, evaṁ yo vetti tattvataḥ" (BG 4.9). And here He is saying: "Yatatām api siddhānāṁ" (BG 7.3)—those who have achieved perfection like yogic perfection. Actually the meaning of perfection is one who has attained the knowledge of the Absolute Truth - that is perfection. First of all amongst thousands and crores of people, a few may try to achieve perfection. Not every one does. That is why the Supreme Lord says: "Manuṣyāṇāṁ sahasreṣu, kaścid yatati siddhaye" (BG 7.3).

And out of those who perfect, who have achieved perfection, only one amongst them will understand the Lord factually. "kaścin māṁ vetti tattvataḥ" (BG 7.3). So, Lord Kṛṣṇa, if someone thinks that, "He is born just as I am born as a human being . . . born in Mathura,"—this is not factual. The fact. First we need to understand what the fact is . . . just as the Māyāvādīs think the Supreme Lord has no form, and when He descends He accepts an illusory body.

This is not the fact. The fact is that, there is no difference between the body of the Supreme Lord and His soul. They are one. That is why the Lord says, "avajānanti māṁ mūḍhā, mānuṣīṁ tanum āśritam, paraṁ bhāvam ajānanto" (BG 9.11) The Supreme Lord's body and soul are one, unlike our body and our soul which are separate. Our body is called kṣetra and soul is called kṣetra-jña.

Īśvaraḥ sarva-bhūtānāṁ, hṛd-deśe 'rjuna tiṣṭhati, bhrāmayan sarva-bhūtāni" (BG 18.61). This machine . . . we get one machine, and make use of that machine to move about here and there. Then, according to our desires and our fruitive activities . . . "karmaṇā daiva-netreṇa, jantur dehopapattaye" (Śrīmad Bhāgavatam 3.31.1).

In this manner, lifetime after lifetime, we accept one body, then leave it to accept another body. In this human form of life if we can factually understand the Supreme Lord, factually - know in truth, then we do not need to accept a material body anymore. This is scientific knowledge - "jñānaṁ te 'haṁ sa-vijñānam" (BG 7.2) - all of you know this.

So, this appearance day of the Supreme Lord, the Lord is unborn. The Supreme Lord comes because, "Paritrāṇāya sādhūnāṁ" and "Vināśāya ca duṣkṛtām" (BG 4.8) He has two activities. One is to protect the devotees, and to destroy the miscreants. The Supreme Lord is Absolute, without any duality. His destruction and protection is the same thing. The one who is destroyed by the Lord is delivered. You all know this that, those whom the Supreme Lord annihilates with His hands, just like He killed big, big demons, were liberated at that very moment.

That is why the Supreme Lord is called "all good". Whatever He does is for our benefit only. That is why the devotees of the Supreme Lord knows that if for some reason they are put into dire straits, then they must know that this is the Lord's mercy, this they should understand, "tat te 'nukampāṁ susamīkṣamāṇo bhuñjāna evātma-kṛtaṁ vipākam" (Śrīmad Bhāgavatam 3.31.1). The devotee of the Lord never blames the Lord, even though they may be put in difficult situations. Even then they offer their gratitude to the Supreme Lord thinking, "Supreme Lord, this is Your mercy." This is the vision of a devotee of the Lord.

That is why the scriptures says: "Ye 'nye 'ravindākṣa vimukta-māninas, tvayy asta-bhāvād aviśuddha-buddhayaḥ" (Śrīmad Bhāgavatam 10.2.32) Those who are not liberated but are falsely under the impression that they are liberated, their intelligence is not purified because till you do not attain the Supreme Lord, that liberation does not last. Why? "Āruhya kṛcchreṇa paraṁ padaṁ tataḥ, patanty adho 'nādṛta-yuṣmad-aṅghrayaḥ" (SB 10.2.32). You know that many big, big saṇyāsis say: "Brahma satyam jagan mithyā" (Śrīpāda Śaṅkarācārya)—they renounce this world saying it is false. Then, after a few days, in this life time itself, they become entangled in politics or some such similar work because only liberation will not work.

If one stops at the stage of "being one with the Absolute", then it is of no use. One has to advance further. That advancing which needs to be done is devotional service, "mad-bhaktiṁ labhate parām" (BG 13.8). After trying to understand what is the bodily effulgence of the Supreme Lord, and after trying to focus all attention to the Supersoul which is within our heart, if one becomes a devotee through association of devotees, then their liberation is perfect and they go back to Godhead, to the Supreme Lord. These are some thoughts. The Supreme Lord has come to teach us all this.

yadā yadā hi dharmasya, glānir bhavati bhārata (BG 18.54), "dharmasya glānir" means when we forget the Supreme Lord. This is "dharmasya glānir". Our religion, the Supreme Lord Himself says, "dharmaṁ tu sākṣād bhagavat-praṇītaṁ" (SB 6.3.19). We cannot concoct our own real religious principles. Just like nowadays it is a fashion that, "I concoct a religion and you concoct a religion." These are not real religion. These are all kaitava, it is cheating. That is why it is said in the Bhāgavatam, "dharmaḥ projjhita-kaitavo 'tra" (SB 1.1.2). This cheating religion is to be thrown out.

Śrīla Prabhupāda: Tomorrow, will you have prasādam in the afternoon here, and your wife is not here?

Kāṣīrāmjī Sarāf: No, she is not. How long are you going to be here in India?

Śrīla Prabhupāda: I will start this gurukula and go! Gurukula . . . building.

Kāṣīrāmjī Sarāf: Gurukula . . . building? So a month or twenty days?

Kāṣīrāmjī Sarāf: Okay, my wife will be back by then . . . (inaudible)

Śrīla Prabhupāda: So, we start the building as we have already discussed.

Kāṣīrāmjī Sarāf: Yes. When I come in the daytime, I will discuss with you the details which are left.

Śrīla Prabhupāda: No, he is preaching that Kṛṣṇa-Balarāma came here. There is one place here, just behind this temple.

Śrīla Prabhupāda: No, he is saying that that is the place where the pastimes of Kṛṣṇa-Balarāma actually happened. Kapoorji. Kapoorji.

Śrīla Prabhupāda: Hurry up a little.

Śrīla Prabhupāda: (to another guest in Bengali) Why don’t you say something?

Viṣvāmbhar Nāthjī Agarwal: It is not nice to speak in between.

Śrīla Prabhupāda: No. I want that we should start the gurukul, temple and houses here itself.

Śrīla Prabhupāda: (aside) Speak in Hindi or what will they understand?

Śrīla Prabhupāda: Please tell him to speak in Hindi.

Śrīla Prabhupāda: You have come to this temple for the first time?

Śrīla Prabhupāda: No? In front of me.

Śrīla Prabhupāda: It is yours only.

Kāṣīrāmjī Sarāf: The soul is very happy. I am saying it from my heart.

Śrīla Prabhupāda: No, everyone says, that the temple is very beautiful.

Śrīla Prabhupāda: It already did so, when you donated the land.

Śrīla Prabhupāda: This Tamāla tree, a lot of people told me to cut it down. I said, no!

Śrīla Prabhupāda: No. No. (end)