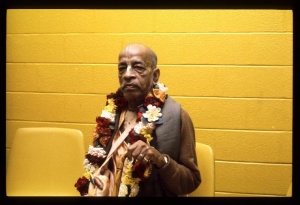 Prabhupāda: . . . money is finished. And there is no use, because they have lost India. For India they made all these arrangements. But that India is lost, so what is the use of maintaining? The Gibraltar also.

Puṣṭa Kṛṣṇa: All of the ships would go around the south of Africa up to England. So they would maintain their shipping route. But now. . . That's a fact. They don't need it.

Prabhupāda: And that Suez Canal is closed, complete?

Puṣṭa Kṛṣṇa: No, it's open again. (break) It is not as Westernized as in a place like Nairobi.

Prabhupāda: The Africans are all thieves.

Puṣṭa Kṛṣṇa: Yes. Here there is not as much stealing as in Nairobi. (break) I think they have had to amputate afterwards, mangled by the shark. It happens frequently. On some of the beaches here they've put up signs that "There's many sharks in the water. It is dangerous to bathe here." Kṛṣṇa says in Bhagavad-gītā, "Amongst fish, I am the shark." (BG 10.31) (Prabhupāda chuckles) He shaved off his beard yesterday, this young boy. He shaved off. He had beard. He shaved off.

Prabhupāda: . . .900,000 forms of life in the water. How many they have seen? They are giving pictures. (break) Calcium carbonate, oil wintergreen, and soap powder, powder card soap, and I will make toothpaste.

Harikeśa: What is this soap powder?