751017 - Letter to Cyavana written from Johannesburg 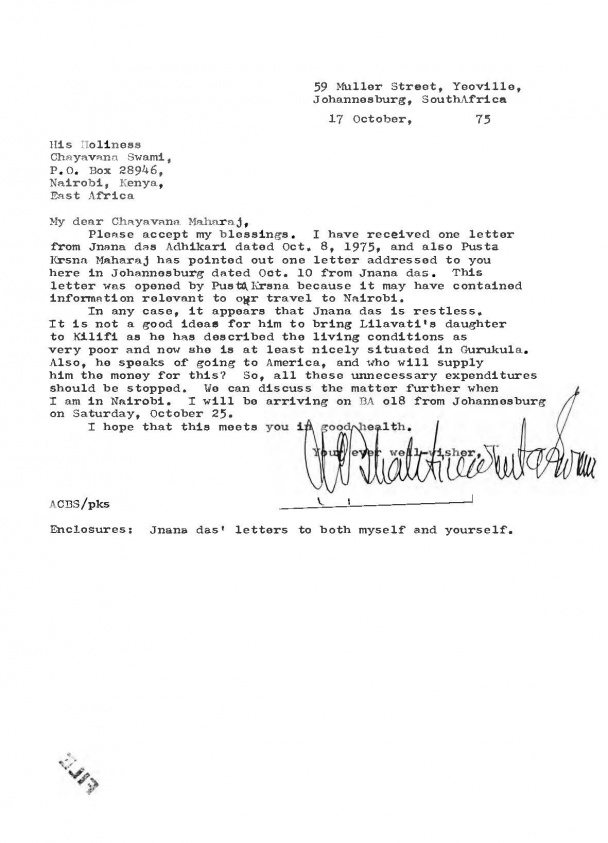 My dear Chyavana Maharaj,
Please accept my blessings. I have received one letter from Jnana das Adhikari dated Oct. 8, 1975, and also Pusta Krsna Maharaj has pointed out one letter addressed to you here in Johannesburg dated Oct. 10 from Jnana das. This letter was opened by Pusta Krsna because it may have contained information relevant to our travel to Nairobi.
In any case, it appears that Jnana das is restless. It is not a good idea for him to bring Lilavati's daughter to Kilifi as he has described the living conditions as very poor and now she is at least nicely situated in Gurukula. Also, he speaks of going to America, and who will supply him the money for this? So, all these unnecessary expenditures should be stopped. We can discuss the matter further when I am in Nairobi. I will be arriving on BA o18 from Johannesburg on Saturday, October 25.
I hope that this meets you in good health.

Enclosures:   Jnana das' letters to both myself and yourself.