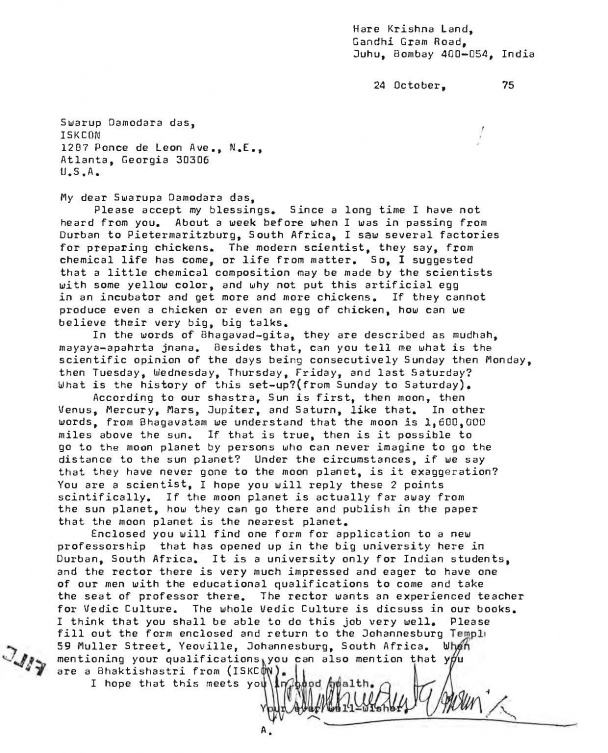 My dear Swarupa Damodara das,
Please accept my blessings. Since a long time I have not heard from you. About a week before when I was in passing from Durban to Pietermaritzburg, South Africa, I saw several factories for preparing chickens. The modern scientist, they say, from chemical life has come, or life from matter. So, I suggested that a little chemical composition may be made by the scientists with some yellow color, and why not put this artificial egg in an incubator and get more and more chickens. If they cannot produce even a chicken or even an egg of chicken, how can we believe their very big, big talks.
In the words of Bhagavad-gita, they are described as mudhah, mayaya-apahrta jnana. Besides that, can you tell me what is the scientific opinion of the days being consecutively Sunday then Monday, then Tuesday, Wednesday, Thursday, Friday, and last Saturday? What is the history of this set-up? (from Sunday to Saturday).
According to our sastra, sun is first, then moon, then Venus, Mercury, Mars, Jupiter, and Saturn, like that. In other words, from Bhagavatam we understand that the moon is 1,600,000 miles above the sun. If that is true, then is it possible to go to the moon planet by persons who can never imagine to go the distance to the sun planet? Under the circumstances, if we say that they have never gone to the moon planet, is it exaggeration? You are a scientist, I hope you will reply these 2 points scientifically. If the moon planet is actually far away from the sun planet, how they can go there and publish in the paper that the moon planet is the nearest planet.
Enclosed you will find one form for application to a new professorship that has opened up in the big university here in Durban, South Africa. It is a university only for Indian students, and the rector there is very much impressed and eager to have one of our men with the educational qualifications to come and take the seat of professor there. The rector wants an experienced teacher for Vedic Culture. The whole Vedic Culture is discuss in our books. I think that you shall be able to do this job very well. Please fill out the form enclosed and return to the Johannesburg Temple, 59 Muller Street, Yeoville, Johannesburg, South Africa. When mentioning your qualifications, you can also mention that you are a Bhakti-sastri from (ISKCON).
I hope that this meets you in good health.