751110 - Letter to Madhudvisa written from Bombay 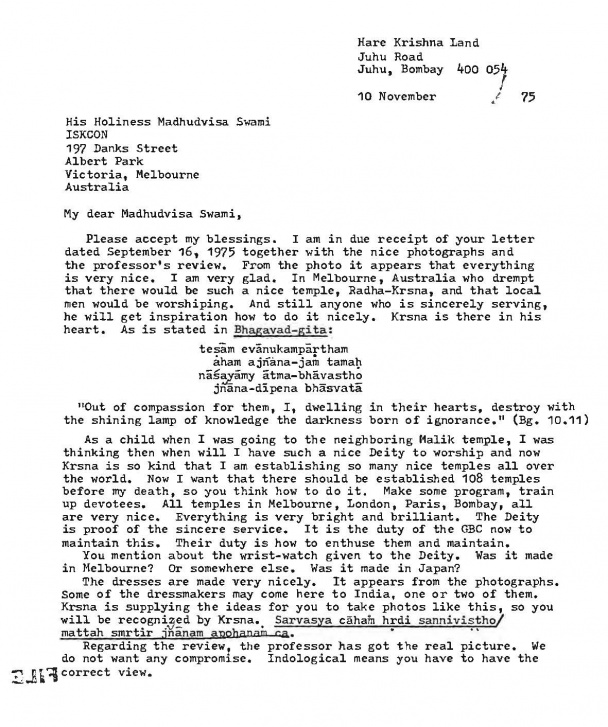 Letter to Madhudvisa (Page 1 of 2) 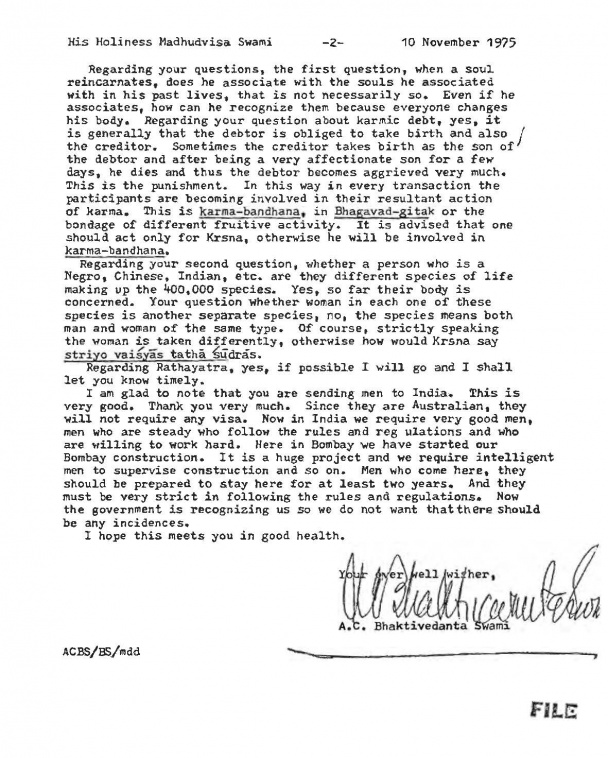 Letter to Madhudvisa (Page 2 of 2)

Please accept my blessings. I am in due receipt of your letter dated September 16, 1975 together with the nice photographs and the professor's review. From the photo it appears that everything is very nice. I am very glad. In Melbourne, Australia who dreamt that there would be such a nice temple, Radha-Krsna, and that local men would be worshiping. And still anyone who is sincerely serving, he will get inspiration how to do it nicely. Krsna is there in his heart. As is stated in Bhagavad-gita:
tesam evanukampartham
aham ajnana-jam tamah
nasayamy atma-bhavastho
jnana-dipena bhasvata
"Out of compassion for them, I, dwelling in their hearts, destroy with the shining lamp of knowledge the darkness born of ignorance." (BG 10.11)

As a child when I was going to the neighboring Malik temple, I was thinking then when will I have such a nice Deity to worship and now Krsna is so kind that I am establishing so many nice temples all over the world. Now I want that there should be established 108 temples before my death, so you think how to do it. Make some program, train up devotees. All temples in Melbourne, London, Paris, Bombay, all are very nice. Everything is very bright and brilliant. The Deity is proof of the sincere service. It is the duty of the GBC now to maintain this. Their duty is how to enthuse them and maintain.
You mention about the wrist-watch given to the Deity. Was it made in Melbourne? Or somewhere else. Was it made in Japan?
The dresses are made very nicely. It appears from the photographs. Some of the dressmakers may come here to India, one or two of them. Krsna is supplying the ideas for you to take photos like this, so you will be recognized by Krsna. Sarvasya caham hrdi sannivistho/ mattah smrtir jnanam apohanam ca.
Regarding the review, the professor has got the real picture. We do not want any compromise. Indological means you have to have the correct view.

Regarding your questions, the first question, when a soul reincarnates, does he associate with the souls he associated with in his past lives, that is not necessarily so. Even if he associates, how can he recognize them because everyone changes his body. Regarding your question about karmic debt, yes, it is generally that the debtor is obliged to take birth and also the creditor. Sometimes the creditor takes birth as the son of the debtor and after being a very affectionate son for a few days, he dies and thus the debtor becomes aggrieved very much. This is the punishment. In this way in every transaction the participants are becoming involved in their resultant action of karma. This is karma-bandhana, in Bhagavad-gita or the bondage of different fruitive activity. It is advised that one should act only for Krsna, otherwise he will be involved in karma-bandhana.
Regarding your second question, whether a person who is a Negro, Chinese, Indian, etc. are they different species of life making up the 400,000 species. Yes, so far their body is concerned. Your question whether woman in each one of these species is another separate species, no, the species means both man and woman of the same type. Of course, strictly speaking the woman is taken differently, otherwise how would Krsna say striyo vaisyas tatha sudras.
Regarding Rathayatra, yes, if possible I will go and I shall let you know timely.
I am glad to note that you are sending men to India. This is very good. Thank you very much. Since they are Australian, they will not require any visa. Now in India we require very good men, men who are steady, who follow the rules and regulations and who are willing to work hard. Here in Bombay we have started our Bombay construction. It is a huge project and we require intelligent men to supervise construction and son on. Men who come here, they should be prepared to stay here for at least two years. And they must be very strict in following the rules and regulations. Now the government is recognizing us so we do not want that there should be any incidences.
I hope this meets you in good health.