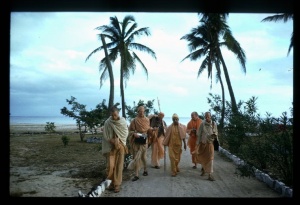 Dr. Patel: And Brahmā, actually, when he learned the Vedas.

Dr. Patel: Those four or five ślokas, five or four ślokas, original of Śrīmad-Bhāgavatam, I want to learn from you. I have read all the commentary—heard even commentary even for four pages—but I think I am little a mūḍha to understand it. (laughing) So I will learn directly if you can teach me. I am now critically studying your . . . this thing, commentary on this.

Dr. Patel: Once I read it, but now I am doing a critical study of it. Both of Sanskrit as well of your comments. (break)

Prabhupāda: . . . divided them by separate words.

Dr. Patel: The Sanskrit written in too much of (Sanskrit). The combination of this word is so difficult . . .

Prabhupāda: . . . recommended to study Bhāgavata from bhāgavata, not by grammar.

Dr. Patel: No, no. But unless, I mean, I like Sanskrit myself, so I try to learn Sanskrit; I can read other, more Sanskrit books. So it is a sort of a study with me, as well as a knowledge of Bhāgavata. So I am trying to be more critical about it. But that way I have read Bhāgavata in Gujarati, even in Hindi . . . (indistinct) . . . Gorakhpur.

Dr. Patel: They are fools.

Prabhupāda: That is also good.

Dr. Patel: That we should not take it like that.

Prabhupāda: If one chants Hare Kṛṣṇa jokingly, that is also good.

Dr. Patel: I thought you were coming tonight. Because you . . . your letter has come that you reach on the . . . (indistinct)

Prabhupāda: Let there . . . God says, "Let there be creation," and there was creation. Why three months?

Prabhupāda: He says, "Let there be creation"; there was creation. That's it.

Dr. Patel: I am going to give you a small piece of news. My, that small daughter, she also took first-class, first distinction name.

Dr. Patel: This is a unique performance in Bombay, that no doctor's two children have got first like this.

Prabhupāda: Hmm. All of them M.D.?

Dr. Patel: M.D. Very distinguished, first class. I was very much pleased by their performance. (break)

Prabhupāda: . . . one is animal. So animal means ferocious. Dharmeṇa hīna paśubhiḥ samāna (Hitopadeśa). Paśubhiḥ samānaḥ They're as good as animal. You cannot expect any good behavior from animals. This is going on. They want to keep the whole population animal, and they're making big, big plans—United Nation, this, that.

Dr. Patel: This is a fraud. It's committed fraud on poor nations of the world, this United Nations.

Prabhupāda: There is no education for making people a human being.

Dr. Patel: Karl Marx, Hegel and all the Engels and those people have got this nonsensical idea that interaction of matter itself produces what we call consciousness. It is not the consciousness which, I mean, agregates the matter. The very first basis on which the whole this rascaldom is, I mean, the basis is this: revolting against the tenets of Hindu teaching. No?

Dr. Patel: No, I mean sanātana dharma of this country.

Prabhupāda: Sanātana dharma, there is no teaching; it is already there.

Prabhupāda: There is no concoction.

Dr. Patel: This concoction has come out from there.

Prabhupāda: Yes. No, everywhere. In your country also there are so many parties . . .

Prabhupāda: Karl Marx maybe. Even your Gandhi-ism, that is also concoction. "Gandhi invented nonviolence," that is also concoction. It is impossible. So everyone is doing this—something manufactured. That is not sanātana dharma. Sanātana dharma is never manufactured. It is already there. You have to accept it, that's all. Otherwise everyone is manufacturing some concoction. This is going on. Hare Kṛṣṇa. Kṛṣṇa is teaching, "Fight." And Gandhi is teaching from Bhagavad-gītā nonviolence. Just see. Is it possible?

Dr. Patel: The will of God is the real thing.

Prabhupāda: Yes, that is Kṛṣṇa consciousness. His will is supreme. Whatever He says, that's all right. As soon as you manufacture, everything is spoiled.

Dr. Patel: It is fractured by man instead of manufacturing. Fractured, broken.

Dr. Patel: But slowly and slowly, sir, the modern science is trying to prove that sanātana dharma, the existence of God, everywhere, which in our times, if we respect scientists for their . . .

Prabhupāda: "They are trying to prove" means so long they are rascals.

Dr. Patel: They are rascals. I quite agree with you. You have caught my rascals. (both laughing)

Prabhupāda: As soon as you say "progressing," that means they are rascals. Unless one is rascal, where is the meaning of progress? Hmm? Rascal requires progress.

Dr. Patel: Whether they do progress or regress we don't know, but . . .

Prabhupāda: No, progress means still rascal. After ten years they'll make no . . . this is progress. So they have no standard knowledge, and that is very much palatable, modern progress. Mūḍha.

Dr. Patel: But sincerely by all these six, six, I mean śāstra, I mean what you call darśanas, our forefathers have realized God, by all the six methods of darśanas.

Prabhupāda: You . . . why your forefathers? Everyone's forefather can understand.

Prabhupāda: No, they are not strictly Vedas. They are partial. Just like mimāṁsa. They say that you do good work and you get the result. That is godlessness.

Prabhupāda: "There is no need of God. You do your duty."

Dr. Patel: And God will do His duty.

Prabhupāda: "God is obliged to give you the award." That is their philosophy. (break)

Dr. Patel: What is that?

Prabhupāda: We can practically see. Suppose two men working very hard, are they getting the same result?

Dr. Patel: That explanation of yours, this, is so very wonderful about the all mukta and baddha jīvas in the beginning, I mean the Bhāgavatam, that they were given free will, whether to remain mukta or baddha. And then when they became baddha, they were overtaken by the lower māyā. And then this is the whole cosmos. So gravely I have understood this best. This is my second reading.

Dr. Patel: I think this one commentary is Jīva Gosvāmī's.

Prabhupāda: No, we have got Viśvanātha Cakravartī also. Śrīdhara Swami, Birarāghava, Vijayadvaja.

Dr. Patel: This man is seventy-years-old devotee. (more exchange of greetings) Maybe he is sixty-eight, sixty-nine years. The way he walks . . . (laughing) He wants to remain young that way.

Prabhupāda: Healthy. He's quite healthy. (Hindi conversation with another man)

Dr. Patel: He's very religious. He's a iron merchant. Iron. (Hindi) I quite immediately. I am sure I am right. (laughing)

That's all. How simple it is. If every one of us, we take this missionary activities of Caitanya Mahāprabhu, we see immediately the face of the country will change. Every gentleman, every sane man, may speak to his family, to his community, to his nation, to his friend, what Kṛṣṇa has said. Then see the result. But they're all manufacturing concoction, becoming big scholars. The more you deviate from Kṛṣṇa's instruction, you become a scholar.

Dr. Patel: I mean the industrial revolutions have really produced a sort of a turmoil in the social set-up.

Dr. Patel: Because the machine has produced goods, and the benefit has been taken over by the . . .

Prabhupāda: Ugra, ugra. This has been described in Bhagavad-gītā, ugra karma (BG 16.9).

Prabhupāda: Instead of making life simplified, they have made it a turmoil.

Dr. Patel: And then the whole society had been so entangled in this things. Independently . . . (indistinct) . . . in this way this industrialization, raising of the wants of men, and then production for the fulfilling of their wants. Only men engaged all the twenty-four hours in this fulfillment of the wants. All the machines are grinding for that—production of the goods, not for the good . . . (break)

Dr. Patel: Karl Marx is the grandfather of all of this.

Dr. Patel: What is real property.

Dr. Patel: (sanskrit) That is what they want. If they are competing with each other from tomorrow . . .

Prabhupāda: (aside) Hare Kṛṣṇa, Jaya. (break) No. Why Karl Marx? Your Vivekananda says yata mat tata patha: whatever you manufacture, that is all right.

Dr. Patel: That is because you are struck by the utter poverty of the people.

Dr. Patel: It was temporary, you see. Because here Karl Marx wanted it permanent, and . . .

Prabhupāda: He himself is suffering from poverty—of knowledge.

Prabhupāda: Kṛṣṇa says, mām ekaṁ śaraṇaṁ vraja (BG 18.66), and Vivekananda says yatha mat tatha path. Just see. He is poverty-stricken of knowledge, and he's giving knowledge. Just see the fun. Caitanya Mahāprabhu said, guru more mūrkha dekhī' karila śāsana (CC Adi 7.71): "My guru found Me, seeing Me, I am a fool number one, he has chastised Me." What is that? "Don't read Vedānta; You cannot understand. Chant Hare Kṛṣṇa," because . . .

Dr. Patel: Here we are talking about the divya part of the . . .

Prabhupāda: Because, no, He was questioned . . .

Dr. Patel: . . . of the life. I talk of the maintenance of the body. To maintain the body Karl Marx put up this theory and, I mean, spoiled the whole thing—whole society and social set-up.

Dr. Patel: We are manufacturing only for the body, but all these . . .

Prabhupāda: Nothing you can manufacture, even in the body. You are medical practitioner. Hundreds of men you see, different types of body. Is it not? You cannot say that "This is the standard." Kāraṇaṁ guṇa-saṅgo 'sya sad-asad-yoni-janmasu (BG 13.22). The actual disease is the contamination of the guṇa.

Dr. Patel: But they desire the people who are manufacturing for the guṇas only, and not for the soul. That is what I am hinting at.

Dr. Patel: These fellows . . . that is what I said, that they are ignorant because they are only doing everything for the guṇas and not for the soul.

Dr. Patel: All the lower . . . all this knowledge is no doubt traigunya. Superior knowledge. But spiritual knowledge is beyond the three guṇas.

Prabhupāda: Yes. Sa guṇān samatītyaitān brahma-bhūyāya kalpate (BG 14.26). We have to transcend all these guṇas, and that is Kṛṣṇa consciousness. Now they are realizing even in Western countries. They are realizing.

Dr. Patel: But they will realize (Hindi). They will learn it by getting beaten up with these . . .

Indian man: We tolerate everything. (Hindi)

Indian man: What is left after.

Dr. Patel: The whole civilization, the modern civilization, is wholly at fault. Unfortunately. And that is the schools we are sending our children to, and these are the public schools.

Prabhupāda: (Hindi about the gurukula in Vṛndāvana)

Prabhupāda: We are opening gurukula, but who will give? A gentleman will not give.

Dr. Patel: He's a great scholar and poet of Gujarati literature, and he comes from the same place where the . . . Dwaraka-bet. He's from Bet, Dwaraka-bet, where all those temples are.

Prabhupāda: He's a devotee of Kṛṣṇa?

Dr. Patel: Yes, he's a brāhmaṇa devotee of Kṛṣṇa. And a great teacher. He was a university professor of Gujarati literature and a great, well-renowned poet . . .

Prabhupāda: (to man) So you do not come to our temple?

Indian man (2): Don't believe what he says. (laughter) I am just an humble servant.

Dr. Patel: He only writes poems on God, Mr. Bethai. Professor of the university. His name is Bethai, because he comes from the Bet.

Dr. Patel: The places of worship are sacred because of the . . . because sacred people are living there.

Dr. Patel: Sir, lotus feet: these are . . . these people are actually putting such a long varga that I am trying to see the lotus feet of God here, of arcā-vigraha. Well, I am unable to here. Instruct them to put up, little varga up, so that we can have darśana of His sacred feet. Please. Tell them. Too long vargas, you simply can't see anything. You were there on . . .

Girirāja: That's in the morning, because of the nightdresses. But after the śṛṅgara is changed for the day, you can see.

Prabhupāda: How He's sat tight to call everyone, "Come and see." Hmm? The Municipality came to drive Him away.

Dr. Patel: You see the present municipal, I mean, administration has fallen into the hands of rogue rascals and horrid people, you know, because of these so-called adult franchise . . . (break) (end).