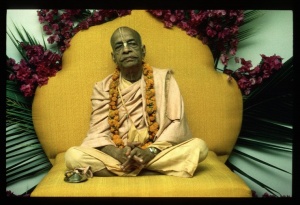 This is summarized in the Vedic language, sarvaṁ khalv idaṁ brahma (Chāndogya Upaniṣad 3.14.1). Without Kṛṣṇa there is nothing existing. In the Bhagavad-gītā also it is said, mayā tatam idaṁ sarvam (BG 9.4). Whatever we see, very superior or inferior, good or bad, that is all from Kṛṣṇa. "Bad is also Kṛṣṇa?" Yes. Bad is also Kṛṣṇa because there cannot be anything existing without Kṛṣṇa—no existentional position. Mat-sthāni . . .

Everything existing on Kṛṣṇa. This material energy—earth, water, fire, air, sky—that is Kṛṣṇa's energy. Bhinnā me prakṛtir aṣṭadhā (BG 7.4). They are also Kṛṣṇa's energies. Opposite elements also. Just like heat and cold, so they are opposite. Śītoṣṇa. Śīta means winter, and uṣṇa means summer: warm and cold, cool. We see practically that the expert electrician by the same electric energy is running on the heater and the cooler. The cooler is also working under electric energy, and the heater is also working. So ephemerally heat is opposite to coolness, and coolness is opposite to heat. But both of them are working under the same energy; simply it is a question of adjustment by the expert electrician.

So God is one and His energy is also one, and there is no separation of energy from the energetic. Just like fire and heat: heat cannot be separated from fire, but still, heat is not fire. I may be heated by high temperature, but if there is fire, then I will be burned—different action—although both of them are the same, heat and fire. Therefore the conclusion should be sarvedam akhilaṁ jagat parasya brahmaṇaḥ śakti (CC Madhya 20.110). Parasya. Parasya means "of the Supreme Brahman." Supreme Brahman is Kṛṣṇa. Īśvaraḥ paramaḥ kṛṣṇaḥ (BS 5.1). And Arjuna also accepts Kṛṣṇa as Para-brahman. So everything is Kṛṣṇa. Therefore Kṛṣṇa said, mayā tatam idaṁ sarvaṁ jagad avyakta-mūrtinā (BG 9.4): "I am spread all over the creation." Avyakta-mūrtinā. But you cannot see Kṛṣṇa. Here we know there is air, there is ether, there is light, there is heat—everything is here. We can see it, experience it, but avyakta-mūrtinā—Kṛṣṇa is invisible, imperson. That is the difference between person and imperson. There are philosophers who think that the Absolute Truth is person, and there are other philosophers, they think the Absolute Truth is imperson. But we followers of Caitanya Mahāprabhu, we accept both. He is person and imperson also at the same time, simultaneously. Acintya-bhedābheda-tattva.

So this is very nice philosophy. We have to understand very clearly this position, the grammatical difference . . . What is called? The nominative? (aside:) What is called in Sanskrit? Karaka? Kartā karaka, karma karaka, like that? Yes. Different things are being done under different situation. They are called karaka. Somebody was working as the person; another is objective; another is causative; another is dative; another is relative. In this way it is explained here, yathā yena yasmai yasmāt (SB 7.9.20). So these are the karaka, different position of activities. But all these different positions can be adjusted into one. That is Kṛṣṇa, Brahman. Eko brahma dvitiya nāsti (Vedānta-sūtra). Only Kṛṣṇa is there; nothing except Kṛṣṇa. That understanding, that there is something other than Kṛṣṇa, that conception, "other than Kṛṣṇa," is called māyā. Actually there is nothing except Kṛṣṇa, but due to our imperfect knowledge we think there is something other than Kṛṣṇa. There is nothing other than Kṛṣṇa. Everything is Kṛṣṇa. Kṛṣṇa says, mayā tatam idam . . .

In other place also it is that eka-deśa-sthitasyāgneḥ.

Just like this light is there. Light is in one localized place. Then another . . . These examples are very easily to be understood, that the sun . . . Sun globe you see in the morning. It is there, but the heat and light is expanded, two energies. With the sunshine, with the sunlight, we get light, sunshine, and at night we are shivering in cold, and there is heat—no more shivering. So two things are emanating from the sun, two energies: heat and light. The physicists, their whole study of physical nature is based on this heat and light, and nothing else. So similarly, Kṛṣṇa has got two energies: heat and light. Here in this material world we can feel the heat. The things are going on very nicely without any change. The sun is rising exactly at 6:15, and the whole day working, and again in the evening exactly at 5:30 it is setting.

So this material world is that heat. Just like I am sitting here, I feel heat—immediately I shall be warm. There must be some fire; otherwise wherefrom the heat is coming? See where there is fire. If there is smoke, then one should understand there is fire. I have seen practically in Nainital, very high hill, and there was smoke. So I asked the station master that "Why there is smoke?" So he said, "There is forest fire." So nobody goes there to set fire, but there is fire. By the smoke, one can understand there is fire. Similarly, we should try to understand there is presence of Kṛṣṇa by the heat and light—two energies, spiritual energy and material energy. The spiritual energy means light. You can see directly Kṛṣṇa. You can talk with Him. You can deal with Him. And the material world, the heat is there. The Kṛṣṇa's energy is working. Parasya brahmaṇaḥ śaktiḥ (CC Madhya 20.110). Without Kṛṣṇa's energy, how everything is taking place? And He is explaining. He says, mayādhyakṣeṇa. Mayādhyakṣeṇa prakṛtiḥ sūyate sa-carācaram (BG 9.10). Don't be rascal, that "This material nature is working automatically." This is rascaldom. Material nature is not working independently, not by accident. It is not accident that exactly at 6:30 or 6:15 the sun is rising. Do you think accident takes place every day? One day you may say, "The sun is rising at 6:30 by accident." But daily? What is this rascaldom?

So those who support this "accident" theory, they are simply rascals. How accident can take place exactly in the same time and in the same way, exactly in the same season changing? And the flowers are coming; the atmosphere is different. Is that accident? Less intelligent, mūḍhā. They will not agree that it is being done by God, by the direction of . . . mayādhyakṣeṇa (BG 9.10). Adhyakṣa means direction. So the sun, moon or anything material that is working, we see they are working very wonderfully. But don't think that they are working automatically or independently. No. That is not possible. The foolish man may think like that, "automatically." No, there is no automatically, no accident. Therefore, yena yasmād yataḥ yad uta (SB 7.9.20). Superior, inferior—everything is systematically being done according to the desire. They say, "Not a blade of grass moves without the desire of Kṛṣṇa." That's a fact.

Without Kṛṣṇa's desire . . . Every step we are going forward, it is guided by Kṛṣṇa. It is not directly by Kṛṣṇa but through the instrument of Kṛṣṇa. This is nature. Nature is nothing but instrument. Durgā. Durgā. Sṛṣṭi-sthiti-pralaya-sādhana-śaktir ekā chāyeva yasya bhuvanāni vibharti durgā (BS 5.44). This durgā energy. Durgā energy means this material energy. Durgā. Durgā means fort. We are packed up within this fort. You see the round sky—it is just like a football—and within, we are packed up. Just like the soldiers, they are within the fort, or there are other persons also, similarly, this is a durgā. Durgā. Duḥ means "difficult," and ga means "going." Dur-gā. So because the nature is feminine, therefore it is called durgā. So just like in the fort, in the jail, if you are put, it is dur-gā, very difficult to come out; very, very difficult. Duḥ means it is not so easy. Therefore it is called dur-gā. You cannot enter in the fort or in the jail. Big, big walls, you cannot enter there without permission, and you cannot come out without permission. That is called durgā. So this Durgā, or durgā-śakti, material energy, very, very powerful. You cannot come out from this fort of material existence without superior permission. That is Kṛṣṇa's permission. Mayādhyakṣeṇa (BG 9.10): "Under My vigilance, under My superintendence." So Durgā-devī is keeping you captivated. When Kṛṣṇa says, "Let him go," immediately. Immediately you are released. And when Kṛṣṇa says, "Keep him under your control," so you have to remain.

So we are captivated now within this material world. We are announcing that "We are independent. Whatever we can like, we can do." These are all foolishness. You are entangling yourself, simply entangling. A little mistake—you'll have to suffer. Just like in our daily affairs you can eat so much. A little more eating means disturbance in the digestion. You are so much under the control of nature. But these rascals, they do not understand it. They declare, "Freedom."

These rascals, vimūḍhā, mūḍhā, very strongly mūḍhās. Ahaṅkāra-vimūḍhātmā. That false egoism—"Oh, I am very big man. I am so intelligent. I am so learned. I have got money"—this is ahaṅkāra. This is called false ahaṅkāra. This is also . . . If you actually have got money, that's all right; you can say, "I have got money." But you have nothing, not a farthing, and still, somehow or other, because you have got some money, you say, "I have got money." That is not your money; that is Kṛṣṇa's money. Īśāvāsyam idaṁ sarvam (ISO 1). Everything belongs to Kṛṣṇa, you rascal. You do not know. You are thinking that it is your money. That is ahaṅkāra-vimūḍhātmā. Now where you are going? You are giving up this body, so take your money with you. How can you take? The money is there, the body is there, the family is there, the house is there—everything left. Now you go, and become a dog. You have treated just like a dog. You have treated just like a hog. Now you take the body of a . . . Now your money, your family, your society, your house—left. So how you can claim, "It is mine"? The ahaṅkāra-vimūḍhātmā. These rascals, under false egoism, thinking, "This is mine. This is . . ." Real sense is īśāvāsyam idam. It is all Kṛṣṇa's.

So service means that Kṛṣṇa's things should be engaged in Kṛṣṇa's service. That's all. You have nothing to earn. Everything Kṛṣṇa's. Just like in India you'll find, there are many devotees. If you go to the Ganges, they are taking bath, and they are offering worship to the Ganges. What is that worship? Now, you take little water from the Ganges, and with mantra you again throw it down. So that water you are offering to the Ganges, is it your property? That water you have taken from the Ganges, but with devotion, if you say, "Mother Ganges, Gangājī, it is your thing. Please take my offering," then Mother Ganges is pleased. Similarly, everything belongs to Kṛṣṇa. The sooner you offer to Kṛṣṇa whatever you have got, that is your triumph. And so long you keep it—"It is my property"—then you are a fool. Then you are a fool number one. You cannot keep it; it is false. Just like a child, he has taken some notes from the father, and he'll not give it, and father is asking, "Ah, my dear child, you are so good. You take little lozenges. You give these note." It is going like that. Kṛṣṇa is begging, patraṁ puṣpaṁ phalaṁ toyaṁ yo . . . (BG 9.26) (break) (end).