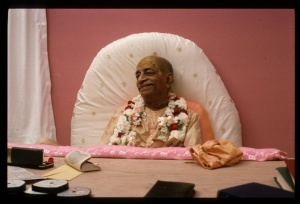 Gurukṛpā: "The living entities in this conditional world are My eternal, fragmental parts. Due to conditioned life, they are struggling very hard with the six senses, which include the mind."

Prabhupāda: So with this instrument he's manipulating this machine, as exactly the pilot, with so many electronics, machine, he's working the flying of the plane. Where is the difficulty to understand? And this is . . . body is a machine. Bhrāmayan sarva-bhū . . . (BG 18.61). Bhrāmayan, wandering. The aeroplane is wandering. This machine is wandering. It is also going, ūrdhvaṁ gacchanti sattva-sthāḥ, sometimes up, sometimes down. Huh? Find out this. (discussion as devotees look for verse) Same aeroplane, going up and down. Two wings, this hand, like this.

Prabhupāda: So same thing: if the pilot is not expert, then goes down to the lowest, finished. Adho gacchanti tāmasāḥ. If the pilot is third class, instead of going up, he goes down, and everything is spoiled. So everything on the pilot. The machine is not important. The machine can go up if the pilot knows how to do it. And the machine can go down. Actually, it is happening. This landing point is very dangerous. If the pilot cannot handle very nicely, immediately smashed. The crash takes place while going up and coming down, generally. That is due to mismanagement of the pilot. When in the sky it is regular speed and balance, it is going nicely. There is no crisis. All crisis take place while coming down and going up, leaving the land and coming the land. I have seen sometimes, they clap as soon as they . . . (Prabhupāda claps his hands) (laughter) "The danger is over." So ūrdhvam and adhaḥ. Madhye tiṣṭhanti rājasāḥ. So in this way, you have to place the subject matter, that the living entity, the soul, is the important thing within this body. Because he's struggling. On account of his ignorance, he's struggling. Manaḥ ṣaṣṭhānīndriyāṇi prakṛti-sthāni karṣati (BG 15.7). This is his position.

Puṣṭa Kṛṣṇa: You mentioned earlier that not only we have to find out who is the speaker, but who is the proper person to hear the subject matter.

Prabhupāda: Yes. If somebody is interested to know what is the important thing, then he can understand this. And if he's animal, simply eating, sleeping, mating, what he will understand? Animal is not interested to know how the world is going on. He gets his food and sex. That's all. That is animal propensity. And as soon as he comes to the human platform, then inquisitive: "Ke āmi, kene āmāya jāre tāpa-traya," Sanātana Gosvāmī. He's not interested, "How I shall develop my economic position?" He has left already a very high-grade economic position. He's not interested. He's interested, "Ke āmi, kene āmāya jāre tāpa-traya (CC Madhya 20.102), actually what is my position? Why I am suffering in this material atmosphere?" That is human life.

Prabhupāda: Oh, yes. Kārpaṇya-doṣopahata. Kārpaṇya-doṣa (BG 2.7). "It was my duty to understand myself, and I am thinking of my these nonsense relatives—my grandfather, my son. What is this? I know that. What I can do by thinking about them? It may be they have come to war. But suppose they would have died naturally—what could I do? So why I am perplexed with these things? I know the defect. I cannot cause their death or birth or existence. It is beyond my jurisdiction. And still, I am anxious—if I kill them, then what would happen? What would happen?" "You kill or not kill, they'll be killed—today or tomorrow." Gatāsūn agatāsūṁś ca nānuśocanti paṇḍitāḥ (BG 2.11). A learned man knows that the body will be finished, the bodily action, today or tomorrow. So what is to lament after this body? Lamentation is that the person within the body, whether he's going to hell or heaven. Ūrdhvaṁ gacchanti or tamo gacchanti. That is real concern. Body will be finished, today or tomorrow or after a hundred years. Who can protect it? But one should be interested with the owner of the body, where he is going, what is his next position. And that is clearly stated: adho gacchanti tāmasāḥ, ūrdhvaṁ gacchanti sattva-sthāḥ (BG 14.18). So you are interested to go up or down or remain in the same status. There are three status: up, down and the same.

Puṣṭa Kṛṣṇa: General mass of people think that life is finished with this body. They're unaware of up or down . . .

Prabhupāda: Therefore . . . therefore, they're rascals. And for the rascals, the Bhagavad-gītā teaching is there. Learn! They are giving the stress on the body that, "The body is finished, everything finished." They do not know beyond the body. But the real knowledge begins, "No, you are beyond this body." That is real knowledge. That is the beginning of knowledge. Any other knowledge except this, that is ignorance; that is not knowledge. They are accepting ignorance as knowledge.

Prabhupāda: That is the defect. Therefore Kṛṣṇa consciousness movement is so essential. They are accepting ignorance as knowledge. Darwin's theory, it is simply speculation on ignorance, and it has been taken as knowledge. Freud's philosophy is the business of the hogs and dogs, and it has been taken as philosophy. Even the hogs and dogs know how to enjoy sex life. And they are . . . on account of sex life, they have written a philosophy. Is that philosophy? Tattva-jñānārtha-darśanam. Find out. The Thirteenth Chapter. Hmm? (discussion as devotees look for verse) Hmm?

Puṣṭa Kṛṣṇa: The goal of knowledge is not there.

Prabhupāda: Just see. This is the position. How low taste—hogs' and pigs' business, and write philosophy. His books are selling like anything.

Prabhupāda: Yes, that I have already told just now. Therefore it is very essential to understand.

Puṣṭa Kṛṣṇa: So the approach used by Kṛṣṇa is essential for any person who wants to understand the Supersoul?

Puṣṭa Kṛṣṇa: Someone in material consciousness cannot understand God? So then what of all these religions, for example Muslim and Christian religion? Generally speaking, they don't even accept the existence of soul.

Prabhupāda: Therefore they're not religion. They're cheating.

Prabhupāda: This is not religion, this is cheating.

Puṣṭa Kṛṣṇa: So simply they're talking about God?

Prabhupāda: Yes. What is this?

Prabhupāda: No, no, no, you can keep that. Simply . . . actually, there is no religion. In the name of religion, some farce is going on.

Puṣṭa Kṛṣṇa: That's a fact. You've said in the past, "Devil citing scripture."

Prabhupāda: Yes. They're eating meat means they have no even human sense. What is that religion? They have no even sense that, "I am cutting throat of one poor animal under my protection. If somebody cuts my throat, how much I am unhappy? And I'm doing the same business, and I'm human being? How can I call myself a human? I have no sense even of compassion." Cats and dogs are passing on as religionists. Some hogs and pigs are going on as philosopher. And other animals is going as scientist, Darwin. They're animals only—cats and dogs. They are the leader of the society. How you can expect any benefit from them? The leaders themselves are cats and dogs, pigs. Śva-viḍ-varāhoṣṭra-kharaiḥ saṁstutaḥ puruṣaḥ paśuḥ (SB 2.3.19). These leaders, they are saṁstutaḥ, they are very much worshiped. By whom? Śva-viḍ-varāhoṣṭra-kharaiḥ. By the dogs, by the pigs, by the . . . śva-viḍ-varāha, camel, and by the ass. Because these particular names, I have explained in the Bhāgavata. So suppose one man has become lion, and he's praised by dogs, camels, asses and pigs. Naturally, they will praise, "Oh, sir, you are the king." Does it mean he's king? He's animal. So it is going on. They are electing a big animal as president. And when he begins to eat, animal, big animal, then they protest, "Oh, now he's not proper president. Get him down, get him down." But why you sent him? "Because we are pigs. We have no other knowledge. We another . . . appoint another big pig as our president."

So everything is explained in the Vedic literature. If you can present them properly, it will act. The voters are śva-viḍ-varāhoṣṭra-khara. And the president is another big animal. That's all. This is transaction of animal kingdom. A lion is the king of some asses, pigs, dogs and hogs. What business you can expect there? This is their real picture. One who is a human being, he's seeing that how the animals are enjoying by voting and electing president. But they are thinking, "We are busy in a very great business. We are electing president." (laughter) This is going on. (break) . . . and you say that these rascal pigs, hogs, they elected president, and this president will eat them, and they will understand what kind of president they have elected. This thing is happening in the most advanced country of USA, and what to speak of other animal kingdoms. Even the topmost state at the present moment, there also is happening the same thing. And what to speak of other small states.

Gurukṛpā: If bhakti-yoga is the . . . one can only understand Kṛṣṇa through bhakti-yoga, why did Kṛṣṇa bother to explain karma-yoga and jñāna-yoga through so many . . .

Prabhupāda: Because there are third-class men, fourth-class men. They cannot understand bhakti-yoga immediately. But at last He says, sarva-dharmān parityajya (BG 18.66), if you are intelligent. Sarva-guhyatam. "Real knowledge is here." Sarva-guhyatamam. But He's proposing at last, "If by understanding all other ways, if he has come to know what is the actual knowledge . . ." that is the most confidential knowledge. That is not for everyone. How one can give up karma-yoga, jñāna-yoga, dhyāna-yoga? They cannot. But Kṛṣṇa says, "This is the most confidential. If you accept this, then it is to be understood you have knowledge." It is not for everyone. Find out this verse. Sixty-three, Eighteenth Chapter, I think. So take these notes, take these books and preach. You have taken all, sannyāsa. You preach.

Prabhupāda: It is to be spoken to the most confidential person. "You are My dear friend; I am talking." Other rascals will not understand. It is especially for Arjuna, not for the common man.

Puṣṭa Kṛṣṇa: ". . . I am speaking to you this most confidential part of knowledge. Hear this from Me, for it is for your benefit."

Prabhupāda: "That is special friendship and special love; so I give you this. Keep it confidential." This is real. Other rascals will not value this. They will protest, "Huh? Why shall I surrender to Kṛṣṇa?"

Gurukṛpā: So what is that confidential?

Prabhupāda: Sarva-dharmān parityajya mām ekaṁ śaraṇaṁ vraja (BG 18.66). "So we have spoken so many other things for other rascals. But you are My friend, very intimate. I tell you, this is real fact." So fact is fact. If you take earlier or later, that is different thing. You have to come. Bahūnāṁ janmanām ante (BG 7.19). One has to take many births before coming to this understanding. Sa mahātmā sudurlabhaḥ. So everyone is not mahātmā even, what to speak of sudurlabhaḥ. (laughs) (end)