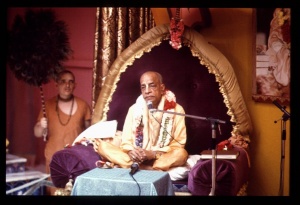 Prabhupāda: . . . do not accept that these trees and plants, they have got life? Do they accept or not?

Hari-śauri: Yes. They say they've recorded different types of living symptoms in plants and whatever. They see how plants react to different stimulus. And there was experiments that they actually react out of fear, they show symptoms of fear.

Prabhupāda: So, they have soul or not?

Hari-śauri: Well, they say that the human beings haven't got a soul, so what to speak of the animals and the plants.

Prabhupāda: What do they mean by soul?

Hari-śauri: (laughs) They don't mean anything. They think it's all just chemical reaction. But nowadays they're doing more research into things like telepathy and what they call ESP, extra-sensory perception. Rather than just put it down to basic chemical reactions, they're thinking that there's something on a more subtle platform.

Prabhupāda: What is that platform?

Hari-śauri: It's what they call ESP, extra-sensory perception, something that you can't see but it's still there, the influence of the mind over material objects.

Puṣṭa Kṛṣṇa: They say that material objects are just like automobiles, dead, but they can't move without the influence of the spirit soul. So the human being or the trees . . . (break) . . . and the jīvas were seeing that the body is moving, so many things are taking place. The point is that in the universe, wind is blowing, the ocean is moving . . .

Puṣṭa Kṛṣṇa: Where? Underneath the water?

Prabhupāda: Yes. A criminal is freed, but if he again commits criminal . . . criminality, then again he's put into the jail. Like that . . . (indistinct) . . . his freedom, now make your choice. But if you misuse it, then again go. Mām aprāpya nivartante mṛtyuḥ saṁsāra vartmani (BG 9.3). (break) . . . go home back to Godhead. But if we do not take the chance, and misuse it, like animals, then again we go down. The process is to go back to home, back to Godhead, eternal life, blissful life. And other process is the cycle of birth and death in different species of life. So this human form of body is to make choice whether he wants to continue the cycle of birth and death in different species of life, or he wants to go home, back to Godhead. (break) . . . mad-yājino 'pi yānti mām (BG 9.25). He's Kṛṣṇa conscious when he goes back to home, back to Godhead . . . (indistinct) . . . species of life, according to karma, they're going to be fish. From fish, by nature's way, leads to the plants, then insect. In this way . . . then birds, then beasts, again human being. Again another birth. In this way they are . . . bahūnāṁ janmanām ante (BG 7.19). Similarly, after many, many births, when he comes to his senses, that "I have enjoyed very much. Now let me go back home . . ." Vāsudevaḥ sarvam iti . . . mām prapadyante. (BG 7.14): "Kṛṣṇa save me, take me." Sa mahātmā sudurlabhaḥ. Such mahātmā, great soul, who has accepted that Kṛṣṇa is everything, that is very, very rarely found. Manuṣyāṇāṁ sahasreṣu (BG 7.3). After many, many millions.

Devotee (1): When one takes to spiritual life, is it the result of material exhaustion, or is it simply the guru's mercy on him, and nothing else?

Prabhupāda: Two ways. One is called sādhana-siddhi; one is called kṛpā-siddhi. What is your question?

Devotee (1): If when one comes to spiritual life, is he coming because of material exhaustion, so much pain in the material world, so therefore he's searching?

Prabhupāda: When one is actually in service, then he comes to . . . "So I have enjoyed. Now no, I don't want. Now I want Kṛṣṇa." That is voluntary.

Devotee (1): But is it the guru? Does the guru give him that sense?

Prabhupāda: Yes. Guru is traveling all over the world, "Take this sense." If one is fortunate he can take.

Prabhupāda: Created? What is that?

Śukadeva: No. They feel that we have created. Man has created the idea of God out of necessity.

Devotee (2): It's insecurity. He feels that the atheists are saying that man needs God, although there is no God. They are insecure in this world.

Prabhupāda: What is God?

Śukadeva: They feel basically that it's an idea. God is an idea.

Prabhupāda: Why it is idea? Explain. What for this idea? Why this idea is necessary?

Puṣṭa Kṛṣṇa: Basically I think because in the Western countries there's no conception of God.

Hari-śauri: The basic principle is that God is there, so you either accept or reject Him.

Puṣṭa Kṛṣṇa: General consensus is that when one is in need of God, then they accept God. They don't think that out of knowledge . . .

Prabhupāda: Therefore I am asking what is the conception? Why they need, why they do not need? First of all describe food. There is some idea that, "Food is like this." Then the question of food. If there is no need of food, then why is this food question?

Prabhupāda: So there is necessity of God.

Śukadeva: The child is always seeking protection from the parent.

Śukadeva: They say that because people are feeling this necessity, it is a crutch.

Prabhupāda: No, no. Necessity means there is. Otherwise why necessity? When you feel hungry, the necessity of food, food is there. Feel necessity of light, the sun is there.

Śukadeva: Do you mean, Śrīla Prabhupāda, that in order to conceive of something, a thing must exist?

Hari-śauri: And it's there even if you don't feel the necessity.

Hari-śauri: It's there even if you don't feel the necessity.

Prabhupāda: That is another position. First of all, as soon as you feel necessity, the object is there.

Śukadeva: They say that necessity should not be God, but that it should be transferred to man.

Prabhupāda: I am not talking of God. I say as soon as you feel necessity, the object is there.

Gopavṛndapāla: That necessity is our mistake. That is our insecurity.

Śukadeva: They're feeling that some people have the necessity for God, but actually . . .

Prabhupāda: Why? That is the question. Why some people have? That means some people intelligent, some people rascals. That's all. This is answer.

Śukadeva: The question is, why some people are feeling a necessity for God? That is the question they ask.

Prabhupāda: "Necessity is the mother of invention." That is an English proverb. Is it not? So unless you feel necessity, you are rascal.

Prabhupāda: Dull matter. Dull matter, it has no necessity. It is dull matter. And as soon as you have got life, there is necessity. Without feeling of necessity means dullness. Just like these Hawaiians, original inhabitants, they did not think the necessity of the skyscraper, motorcar or the . . . (indistinct) . . . but when it was inhabited by the Americans, they felt necessity. That is the difference between advanced and not advanced.

Puṣṭa Kṛṣṇa: Can one say that necessity for eating, sleeping, mating and defending is animal life, and the necessity for God is advanced life?

Śukadeva: The atheists feel that they've put the necessity on the wrong object.

Devotee (2): He has necessity for God.

Prabhupāda: Yes. Manuṣyāṇāṁ sahasreṣu (BG 7.3). Out of millions and millions people, one has the necessity for Kṛṣṇa. (break) Material scientists, they are creating necessities, television, and they are thinking advanced. What is the use of television? There is no use. But this is advanced civilization.

Prabhupāda: Yes. Unless there is necessity, what is the advancement? There is dull matter. Yayedaṁ dhāryate jagat (BG 7.5). Apareyam. The dull matter is inferior energy. And the other prakṛti, apareyam itas tu viddhi me prakṛtiṁ parām, jīva-bhūtāṁ mahā-bāho, the living entities, they have got necessities. Dull matter, there are no necessities. The more one is dull, his necessities are less. And those who are advanced, his necessities begin.

Hari-śauri: Well, they use . . . they argue that, say like in India, where there's no great material development . . .

Prabhupāda: Then we shall judge the quality of necessity. That is another thing. First of all necessities, then quality.

Prabhupāda: First of all we have to understand that one who has no necessity, he's in the lowest status. One who has got necessity, he is in the higher status.

Prabhupāda: Caitanya Mahaprābhu: śūnyāyitaṁ jagat sarvaṁ govinda-viraheṇa me (CC Antya 20.39). That necessity, that without Govinda I'm feeling everything vacant. That is necessity. That necessity is final.

Prabhupāda: Anartha. (break) . . . they stop here. No more this material necessities. But he does not know that he cannot live without necessities. That they do not know. They simply beget these false necessities. Just like disease. I do not want disease, but that does not mean I do not want health. (laughter) So these rascals, they are thinking that, "We do not want anymore this material world. Brahma satyaṁ jagan mitya." But Vaiṣṇava says, "No, you must have the real thing, then you can cease from this unreal necessities." Otherwise after living for some time in brahma satya, then you'll come, "Oh, it is useless. I don't enjoy. Let me go again to open hospital, school, engage in something politics, no work." But he cannot do. Āruhya kṛccheṇa paraṁ padaṁ tataḥ patanty adhaḥ (SB 10.2.32). We are living entities. We require engagement, necessities. So give up necessities means these rascal necessities and hankering for. Caitanya Mahāprabhu, He's sannyāsī. He has no necessity. Why He's crying for Govinda? He has given up the whole world, sannyāsī. And why He's crying for Govinda? That is real necessity. Govinda-viraheṇa me. Govinda necessity. The necessity is Govinda is not alone. There again life, again Vṛndāvana, again gopīs, again dancing, again eating, again everything. That necessity.

Śukadeva: As a necessity, this is a symptom of weakness . . .

Prabhupāda: Rascal, this weakness . . . you are already necessity of so many things. Make all the necessities zero. At last we at least feel necessity of a woman. (laughing) That you cannot avoid. That's all. And then you'll be punished with shoes. (laughing) When you'll become a servant of woman, then you, "No, what is the necessity?" Become thief, you'll become rascal, rogue, you'll be beaten by shoes, and everything is gone. Now these are your necessities. The hippies, they have left no necessities, but the woman is there. (laughter) They have necessities there. Nature is so powerful you'll have to feel this necessity, and with this necessity you'll require so many necessities. (Sanskrit) They're talking like madmen. What the madman does not talk, and what the goat does not eat? (laughing) Means rascals only.

Hari-śauri: It boils down to this question of independence.

Hari-śauri: They all want to be independent, but there's no chance. (break)

Śukadeva: . . . in the kingdom of God, then he can become independent.

Prabhupāda: The idea of God is not for everyone. Only for the brāhmins. Those who are brāhmins at death, brahma-jānāti vibrāhmaṇa. Our process is to give them chance to hear. Then he'll get gradually idea, not immediate. In the beginning let him eat prasādam and chant Hare Kṛṣṇa. That's all. (break) "My dear friend, please come. Chant with us, dance with us, and take prasādam." There will be no . . . (break) (end)