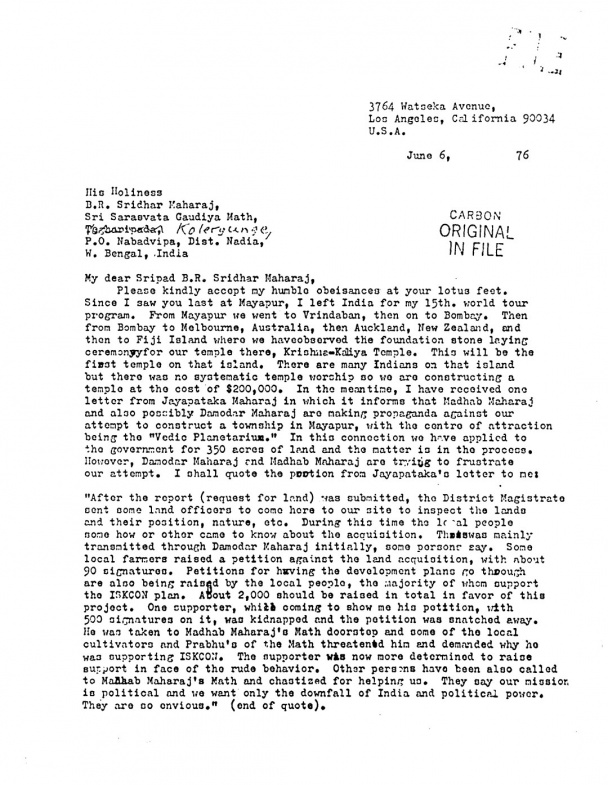 Letter to Sridhar Maharaj (Page 1 of 2) 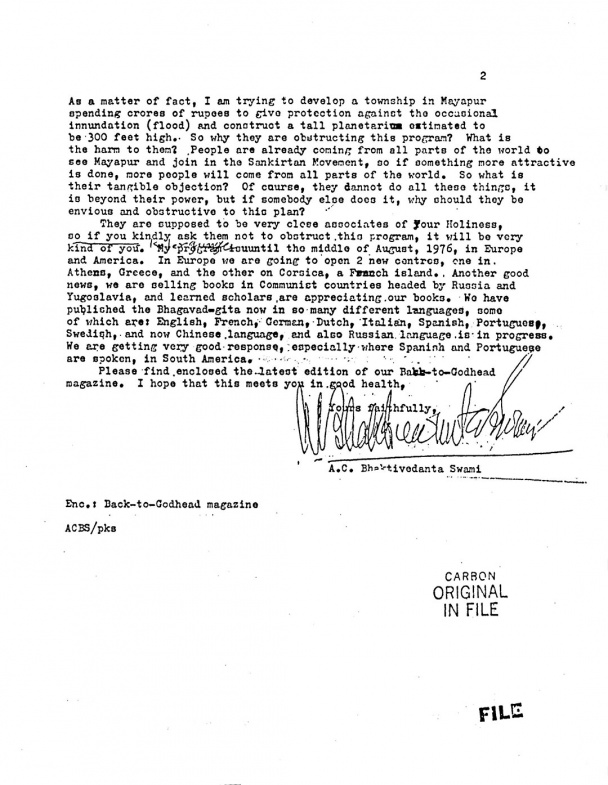 Letter to Sridhar Maharaj (Page 2 of 2)

My dear Sripad B.R. Sridhar Maharaj,
Please kindly accept my humble obeisances at your lotus feet. Since I saw you last at Mayapur, I left India for my 15th world tour program. From Mayapur we went to Vrindaban, then on to Bombay. Then from Bombay to Melbourne, Australia, then Auckland, New Zealand, and then to Fiji Island where we have observed the foundation stone laying ceremony for our temple there, Krishna-Kaliya Temple. This will be the first temple on that island. There are many Indians on that island but there was no systematic temple worship so we are constructing a temple at the cost of $200,000. In the meantime, I have received one letter from Jayapataka Maharaja in which it informs that Madhava Maharaja and also possibly Damodara Maharaja are making propaganda against our attempt to construct a township in Mayapur, with the centre of attraction being the "Vedic Planetarium." In this connection we have applied to the government for 350 acres of land and the matter is in the process. However, Damodara Maharaja and Madhava Maharaja are trying to frustrate our attempt. I shall quote the portion from Jayapataka's letter to me:

"After the report (request for land) was submitted, the District Magistrate sent some land officers to come here to our site to inspect the lands and their position, nature, etc. During this time the local people some how or other came to know about the acquisition. This was mainly transmitted through Damodara Maharaja initially, some persons say. Some local farmers raised a petition against the land acquisition, with about 90 signatures. Petitions for having the development plans go through are also being raised by the local people, the majority of whom support the ISKCON plan. About 2,000 should be raised in total in favor of this project. One supporter, while coming to show me his petition, with 500 signatures on it, was kidnapped and the petition was snatched away. He was taken to Madhava Maharaja's Math doorstep and some of the local cultivators and Prabhu's of the Math threatened him and demanded why he was supporting ISKCON. The supporter was now more determined to raise support in face of the rude behavior. Other persons have been also called to Madhava Maharaja's Math and chastised for helping us. They say our mission is political and we want only the downfall of India and political power. They are so envious." (end of quote).

As a matter of fact, I am trying to develop a township in Mayapur spending crores of rupees to give protection against the occasional innundation (flood) and construct a tall planetarium estimated to be 300 feet high. So why they are obstructing this program? What is the harm to them? People are already coming from all parts of the world to see Mayapur and join in the Sankirtana Movement, so if something more attractive is done, more people will come from all parts of the world. So what is their tangible objection? Of course, they cannot do all these things, it is beyond their power, but if somebody else does it, why should they be envious and obstructive to this plan?

They are supposed to be very close associates of Your Holiness, so if you Kolergune [handwritten] kindly ask them not to obstruct this program, it will be very kind of you. My program is until the middle of August, 1976, in Europe and America. In Europe we are going to open 2 new centres, one in Athens, Greece, and the other on Corsica, a French island. Another good news, we are selling books in Communist countries headed by Russia and Yugoslavia, and learned scholars are appreciating our books. We have published the Bhagavad-gita now in so many different languages, some of which are: English, French, German, Dutch, Italian, Spanish, Portuguese, Swedish, and now Chinese language, and also Russian language is in progress. We are getting very good response, especially where Spanish and Portuguese are spoken, in South America.

Please find enclosed the latest edition of our Back-to-Godhead magazine. I hope that this meets you in good health,