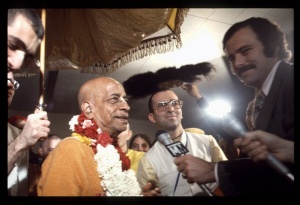 AUDIO NOT AVAILABLE IN ARCHIVES

Puṣṭa Kṛṣṇa: No, you were right on the mark, Prabhupāda. Always. The old man, the other night, when you said that, he said: "This is something like elitism."

Prabhupāda: Elitism? What is that.

Puṣṭa Kṛṣṇa: They think it's only for a certain section of people.

Prabhupāda: Gentlemen class. Without first-class man, what is the use of second-class, third-class men. They will ever remain in the darkness.

Puṣṭa Kṛṣṇa: Christians have a tendency to disbelieve that man can lead man back to God. They think that Christ or God comes, and then, like this. It doesn't matter what quality of men they are.

Hariśauri: No, he's saying that God can take you there, but then after God's . . .

Devotee: They say Christ is God.

Puṣṭa Kṛṣṇa: They say everyone is sinful; therefore what is the use?

Hariśauri: But their whole philosophy is that no one can be sinless except Christ.

Devotee: Everyone in the world is becoming tenth-class men, but Śrīla Prabhupāda is turning the whole thing around. Had you not come, there would be no hope for the whole world.

Puṣṭa Kṛṣṇa: They say that "Thou shalt not kill," that's okay, but this is an impossible instruction.

Prabhupāda: This is rascaldom.

Hariśauri: That's a common philosophy. The Ten Commandments are there, but they're an ideal that no one can ever achieve.

Prabhupāda: Then you go to hell, rascaldom . . . (indistinct) (end)