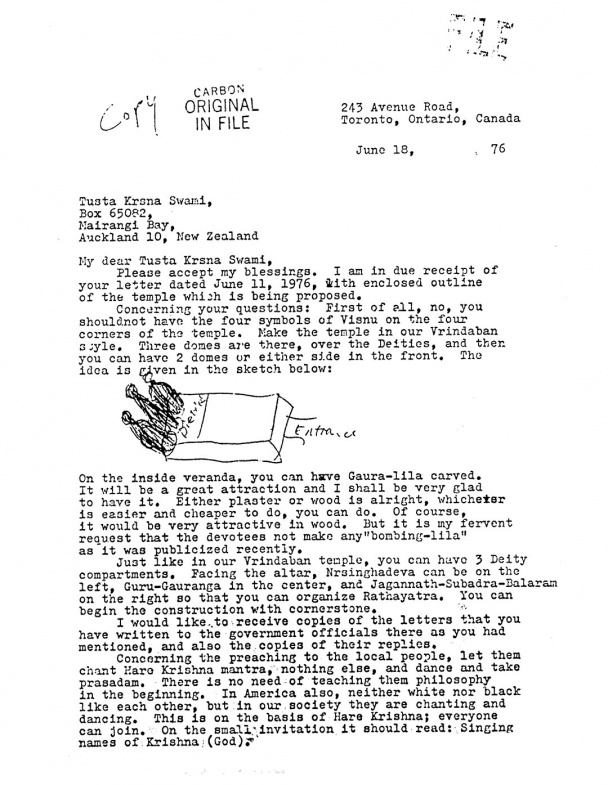 My dear Tusta Krsna Swami,
Please accept my blessings. I am in due receipt of your letter dated June 11, 1976, with enclosed outline of the temple which is being proposed.

Concerning your questions: First of all, no, you should not have the four symbols of Visnu on the four corners of the temple. Make the temple in our Vrindaban style. Three domes are there, over the Deities, and then you can have 2 domes or either side in the front. The idea is given in the sketch below:

On the inside veranda, you can have Gaura-lila carved. It will be a great attraction and I shall be very glad to have it. Either plaster or wood is alright, whichever is easier and cheaper to do, you can do. Of course, it would be very attractive in wood. But it is my fervent request that the devotees not make any "bombing-lila" as it was publicized recently.

Just like in our Vrindaban temple, you can have 3 Deity compartments. Facing the altar, Nrsinghadeva can be on the left, Guru-Gauranga in the center, and Jagannatha-Subhadra-Balaram on the right so that you can organize Rathayatra. You can begin the construction with cornerstone.

I would like to receive copies of the letters that you have written to the government officials there as you had mentioned, and also the copies of their replies.

Concerning the preaching to the local people, let them chant Hare Krishna mantra, nothing else, and dance and take prasadam. There is no need of teaching them philosophy in the beginning. In America also, neither white nor black like each other, but in our society they are chanting and dancing. This is on the basis of Hare Krishna; everyone can join. On the small invitation it should read: Singing names of Krishna (God).