760624 - Letter A to Ramesvara written from New Vrindaban, USA 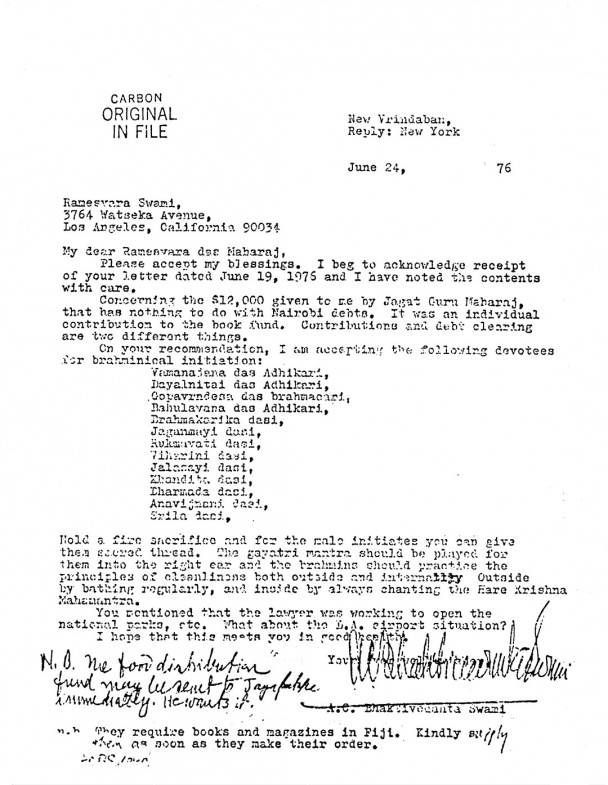 My dear Ramesvara das Maharaj,
Please accept my blessings. I beg to acknowledge receipt of your letter dated June 19, 1976 and I have noted the contents with care.

Concerning the $12,000 given to me by Jagat Guru Maharaj, that has nothing to do with Nairobi debts. It was an individual contribution to the book fund. Contributions and debt clearing are two different things.

On your recommendation, I am accepting the following devotees for brahminical initiation:

Hold a fire sacrifice and for the male initiates you can give them sacred thread. The gayatri mantra should be played for them into the right ear and the brahmins should practice the principles of cleanliness both outside and internally. Outside by bathing regularly, and inside by always chanting the Hare Krishna Mahamantra.

You mentioned that the lawyer was working to open the national parks, etc. What about the L.A. airport situation?


n.b. They require books and magazines in Fiji. Kindly supply them as soon as they make their order.

N.B. food distribution fund may be sent to Jayapataka immediately. He wants it. [Handwritten]