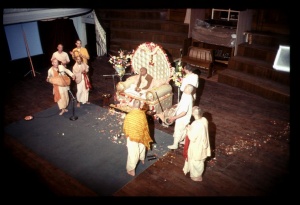 Prabhupāda: So, in Detroit they do not go on the street?

Hari-śauri: No, not in the local neighborhood.

Prabhupāda: So far, there was no disturbance.

Hari-śauri: No, not while we were there.

Prabhupāda: No, before that.

Hari-śauri: No, they haven't reported any disturbance.

Prabhupāda: And the black man, they come also?

Hari-śauri: Yes, because the devotees are not prejudiced in any way. We have white devotees and we have black devotees also. And if the neighbors want to come and see the place, then they are allowed in and shown around. We are about the only ones who could possibly live there.

Hari-śauri: We are the only ones that could live there.

Prabhupāda: What is the reason they are given equal facility, still they are so wretched, poor, ruffian?

Hari-śauri: Just low class. They have no . . . There's no intelligence how to utilize their wealth correctly.

Hari-śauri: I think you give that example. If you give . . . If there's a dog and you put him on a king's throne, (Prabhupāda laughs) he'll still come and lick your feet.

Prabhupāda: Yes, he'll lick up shoes. Another example is given: aṅgārā śveta . . . (Bengali saying). If you take a piece of coal, you can wash it hundreds and thousands of times, it never becomes white. And these are material things, but spiritually you can reform. It doesn't matter. If one comes to the spiritual platform then everything is possible. Otherwise not.

Hari-śauri: They're always looking for a platform of equality.

Hari-śauri: No, just the people in general, for happiness. Because they understand that if there are so many different groups, then there will always be fighting and dissent. So they are always looking for some compromise how to get the groups to live together.

Prabhupāda: This is equal—Kṛṣṇa consciousness. Otherwise not.

Hari-śauri: No. Materially speaking, they've tried so many ways to integrate the blacks with the whites here in America, but what has actually happened is, through those efforts, they've created a worse situation. By deliberately forcing black children and white children to go to the same schools . . . Sometimes they have what's called here bussing. It's a big, major issue in politics now. Because they take all the black children, and they take them to a white area just so that they can go to the school there. They actually take them further away from their local schools to another school, where it is all white children, so that they'll integrate and mix. So it's very controversial.

Hari-śauri: No. They say that . . . because it's like an artificial.

Prabhupāda: Yes, it is artificial. They are lowborn, there is no doubt about it. Otherwise, they are getting the all facilities, still they are wretched, poor, unclean, not educated, not gentle—everything. All bad behavior. (end).