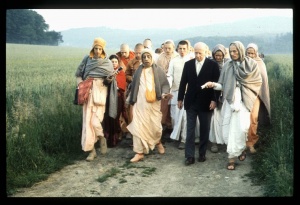 Ṛṣi Kumāra: There's no enjoyment out there. It's all illusion. I think I tried everything.

Prabhupāda: I was surprised that "How Ṛṣi Kumāra can fall down like this?" I had so confidence of this boy from the very beginning. He was so nice, so pure. And māyā is so strong. But could not do very well, māyā, very long. Thank Kṛṣṇa and . . . So stay with us.

Prabhupāda: Kaunteya pratijānīhi na me bhaktaḥ praṇaśyati (BG 9.31). This is Kṛṣṇa's mercy, special mercy. So always be calm and chant and pray to Kṛṣṇa. Don't spoil this life. It is so valuable. Viṣayaḥ khalu sarvataḥ syāt (SB 11.9.29). The sense gratification can be available in every life, cats' and dogs' also. Why should we sacrifice the greatest boon of human life? Hare Kṛṣṇa. So how are you?

Rādhā-vallabha: Seventh Canto, Volume Three, has been sent to the printer.

Prabhupāda: Seven-three? Oh. So our Ṛṣi Kumāra has come back.

Ṛṣi Kumāra: I couldn't stay away any longer, because I was so bored with everything I was doing. All I could do was chant, and then I had to come back. There's nothing that satisfies except Kṛṣṇa.

Prabhupāda: Best thing is to preach for some time. Go with the saṅkīrtana party. He's a good mṛdaṅga player also. His photograph is there.

Devotee: From the very beginning.

Ṛṣi Kumāra: We just got here this afternoon.

Prabhupāda: Rādhā-vallabha, just see, young boy, how he's working hard. You were doing also. You were doing so many things at a time. In Bombay you were doing herculean task, everywhere. He knows how to cook, how to give massage, how to . . . Yes. How to keep accounts, yes. Qualified. How to cook. Everything. So, may Kṛṣṇa save you. What can I say more?

Puṣṭa Kṛṣṇa: This evening, Śrīla Prabhupāda, we are arranging that you can see the film a little bit later in your room. Perhaps you would like to sit outside in the garden?

Puṣṭa Kṛṣṇa: Arrange your chair out there.

Prabhupāda: Los Ang . . . how is everything going?

Prabhupāda: So we have to go outside? No.

Puṣṭa Kṛṣṇa: (aside:) The chair is there? There are some people who have come, if you'd like to sit out . . .

Prabhupāda: Yes, I'll go. So you have given them some prasādam?

Puṣṭa Kṛṣṇa: We arranged for that.

Prabhupāda: Give them. They have come from distant place. Hare Kṛṣṇa. Jaya.

Prabhupāda: Jaya Caitanya Mahāprabhu. Jaya. Lord Śiva became victimized by woman, what to speak of others? I am thinking of that boy also, Paramahaṁsa. He was a nice boy.

Prabhupāda: Do you know where is Paramahaṁsa now?

Rādhā-vallabha: He's in Denver, Colorado. He's not doing so good.

Prabhupāda: Is it not possible to see him?

Rādhā-vallabha: Trivikrama Mahārāja went to see him, but he was too much in illusion.

Prabhupāda: No, that's all right. Still, I want to see.

Prabhupāda: He was very good boy.

Rādhā-vallabha: You want us to get the message to him that he should try to come to New York to see you?

Rādhā-vallabha: I'll try and get that message to him, to come to New York Ratha-yātrā.

Prabhupāda: He was very nice boy.

Prabhupāda: Māyā is so strong. Lord Śiva is not excused, (chuckles) what to speak of others.

Rādhā-vallabha: I have three sketches from the artists. Would you like to see them? This is for Eighth Canto, Volume One.

Prabhupāda: Yes, that is the only life, to think of publication and distribution.

Rādhā-vallabha: This keeps me alive. If I didn't have this service, I think I would just die.

Prabhupāda: Even in this weak . . . I am very weak nowadays. Still, I am working.

Prabhupāda: I think I shall not be able to go for walks. This morning my heart was beating too much.

Puṣṭa Kṛṣṇa: Best would be, then, to rest, perhaps up until at least until Washington and see, because in Washington there may be a very suitable situation. It's hard to walk on these roads also. They are very rough, and the altitude is high. Not so good for you.

Prabhupāda: Yes. That we will do. Yes.

Rādhā-vallabha: This is the story of King Indradyumna, when Agastya Muni cursed him to take birth as an elephant.

Rādhā-vallabha: When King Indradyumna was meditating and Agastya Muni came, and so he cursed him to take birth as an elephant.

Prabhupāda: He became an elephant.

Rādhā-vallabha: Yes, Gajendra. So the artists want to know if it is okay to show him outside in front of a cottage like that.

Rādhā-vallabha: Then . . . This is a very rough sketch. This is when the demigods and demons were churning the ocean of milk with Vāsuki. So they want to make sure that . . . So Lord Śiva will be standing outside the Milk Ocean. He won't be in the ocean. He'll be on the shore of the ocean, drinking the poison.

Rādhā-vallabha: Okay. So then they want to know if it's okay to have Lord Śiva's bull with Lord Śiva.

Prabhupāda: Yes. Where Lord Śiva can go, his bull can go.

Rādhā-vallabha: So then they want to know, is it all right to show the demons and the demigods standing right on the ocean?

Prabhupāda: They were churning. That's all.

Rādhā-vallabha: So then they can actually stand right on the water.

Prabhupāda: Churning was done in the water. Milk. Milk Ocean.

Rādhā-vallabha: But they are not standing on the bottom. They are standing actually on the surface.

Rādhā-vallabha: When we did Lord Nṛsiṁha-deva, there were some arms that you wanted transparent. You just wanted the four main arms looking regular. So all the other arms should be transparent except for four?

Rādhā-vallabha: It just says "a thousand arms." So just paint like that?

Rādhā-vallabha: And then they just want to know if . . . One more question on this, that remnants of the poison from Lord Śiva went to the scorpions and snakes.

Prabhupāda: Yes, you give this.

Prabhupāda: Yes, round about.

Prabhupāda: Yes. Why he's there? It is all right. Give them here.

Rādhā-vallabha: Jaya. That's all that they want to know. Thank you, Śrīla Prabhupāda.

Prabhupāda: Hare Kṛṣṇa. When everything do with devotion, it will come out correct.

Prabhupāda: We have got our testing tubes in Bhagavad-gītā. Who was speaking that "If God is talking, what is the use of spiritual master," yesterday?

Prabhupāda: "God will talk with anyone."

Puṣṭa Kṛṣṇa: He said, "God is talking with them from within."

Prabhupāda: To any rascal. Does any rascal know that God is within? And He's witnessing all criminalities. Does he accept that? Then the yogīs should not have illicit connection with their disciples. Do they believe God is . . .? It is simply business for earning money and getting woman. They have no other . . . Valueless. Therefore the government has said, "Fake." What is that? Actually, that is a fact. So many rascals are coming, especially in America. Government, they are seeing, "What is this?" "Transcendental meditation and do whatever nonsense you like." Guru Maharaj-ji: "No use of books." Practically we are saving the whole world. What can be done? There are so many rascals. Let us do it sincerely. And if we also become victimized, then it will be stopped. Āpani ācari' prabhu jīve śikhāilā. Anyone who says that God is speaking with, immediately take him as rascal. God is so cheap that He will talk with rascals. He wants to talk, but he cannot hear. Lord Jesus advised him, "Don't steal." Why does he steal? If God is not advising from within, then why he's going at night when everyone asleep. God is not dictating that "Don't steal"? But he will not care for God's instruction. Then, it is whose fault? If I say that "You don't do it" and still you do it, then?

Hari-śauri: Just the oranges. They have such a big variety.

Prabhupāda: Next, the third part, how many pages?

Puṣṭa Kṛṣṇa: What is the last chapter in the . . . I'm not sure, Śrīla Prabhupāda. I have to inquire from him. The Fifteenth Chapter, though, is very long.

Puṣṭa Kṛṣṇa: It should be long. So many long purports in the Fifteenth Chapter of the Seventh Canto.

Prabhupāda: About the foretelling of Bhāgavatam. The other day I recited so many verses. One of them, long hairs. Now see how practical. And now this is confirmation of the foretelling. Who knew five thousand years that people will keep long hairs and think of themselves as very beautiful? It is mentioned in Bhāgavata. How it is possible unless they can see actually what is going to happen? That is foretelling. And other description, they are also fact. Everything is there. And all this is five thousand, two thousand years' foretelling. The millions and millions of years' foretelling they are: what will the eighth Manu, and how they will . . . ninth Manu, tenth Manu, up to fourteenth Manu. All the Manus together, forty-three lakhs, thousand times. This is the all the Manus' time. And the whole history is concluded that "Now I have mentioned past, present and future." It is not difficult. Just like tomorrow for my daily routine, what I shall do tomorrow from morning to evening, I can say. Is it very difficult for me? So it is a question of Brahmā's one day. So it can be said by them, not by us. These rascals think only in their standard of thinking: "I cannot live in such, such condition; therefore there is no living entity." This is their idea. "I cannot live within the water; therefore there is no living entity. I cannot live within the fire; therefore there is no living entity." Kūpa-māṇḍūkya-nyāya, the same. "Whatever is in my experience, three feet water . . . How there can be unlimited?"

Hari-śauri: I was reading a very good example like that. These men, they have this, what's called divining, that they find water by means of a stick. They lay a stick on their hands like this, and they turn around in different directions, and the stick suddenly dips and points to the ground wherever there's water underground. And it's proven that it works. It's a very effective way of finding water. But no one knows how to . . . how it works. So they put a suggestion during the Vietnam War to the Marines that they should use this method for finding out the underground tunnels of the Viet Cong so that they could find them very easily. So they showed them by experiment that it's practical and it works. So they gave the rods to the physicists, and they checked them all out, and they couldn't figure out how they worked. So they said that because the physicists could not understand how it worked, therefore it was rejected. So they rejected the whole thing. So then the Marines in Vietnam, they heard about it, so they started to use the rods themselves, and in that way they were able to destroy many enemy hideouts. But officially the Marines had to reject it, because the scientists couldn't understand how it worked, so therefore they said that it was no good, it wasn't viable.

Dhṛṣṭadyumna: The word science comes from the Latin word which means "to know." But they simply have theories. They don't know. But we have actual knowledge.