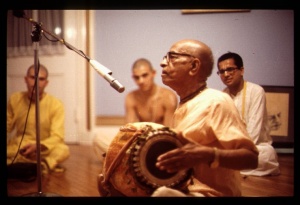 Prabhupāda: I have got a sister. She is three years younger than me. So sometimes I chastise her like anything, because we have the same feeling. She is younger. Seventy-seven years, younger sister. But the feeling is there, younger. You know I sometimes chastise her.

Indian man: Here the feeling is about . . . we can do more work. It doesn't depend upon the age. In spite of this age we can do as much work as you want. This is what I wanted to emphasize here.

Prabhupāda: Because the soul is not dependent on the body. Asaṅgo 'yaṁ puruṣaḥ. If the soul has got energy, he doesn't care for the body.

Indian man: I have talked with some brāhmins here about the work that is being done here. They say: "We can't do this type of work. We can do pūjā, sandhyā. We can do kīrtana for some time during the day, but not the whole day. Not whole day. Because we have to feed ourselves also and run from place to place. These days people are not giving us as much charity as they should."

Prabhupāda: They can live here and . . .

Prabhupāda: They can eat here. There is no insufficiency. Simply come and manage and eat, as many men as you come here. We shall bring everything. There is no scarcity of food here. Everyone is welcome to engage his full time for Kṛṣṇa's service. I am begging from the whole world, so there will be no scarcity. If somebody refuses, other will . . . (indistinct) . . . my field is the whole world, and I am a professional beggar. That's all.

Indian man: One feeling I have I must express before you, otherwise whom can I express those feelings? The books are very costly. They are very good, but very costly.

Indian man: Books. They are very costly for Indians who are very poor.

Prabhupāda: When you are here, you can read all the books.

Indian man: I personally can do this, sir, by coming here. But people would like to purchase these books, but they are very costly. If they can be printed in India, or . . .

Harikeśa: We're working on printing them in cheaper editions in India.

Indian man: That would be wonderful.

Prabhupāda: Yes, we are trying for that.

Vāsughoṣa: Already this Bhāgavatam, First Volume, has been printed in Delhi. It's about three times less cost.

Prabhupāda: So you are not getting that book?

Vāsughoṣa: No, in Hyderabad we haven't gotten that yet.

Vāsughoṣa: I don't know. I'm not in a management position. Mahāṁsa Mahārāja is ordering.

Mahāṁsa: They will not part with even one thousand rupees. They're exactly what you described. And also these were the people who are with Śaṅkarācārya who came the first time when you had come here. They were with Śaṅkarācārya. And Hariprasad and some Marwaris were with our movement, and these people were on the other side. So there was some conflict at that time. And Śaṅkarācārya came and you . . .

Prabhupāda: Śaṅkarācārya, he says that you are bhagavān.

Mahāṁsa: Yes. Also nirākāra. All these things they have been influenced. But the fact that now they are slowly coming to accept us. There is one Mr. Badanman who was the host of Śaṅkarācārya, and for two and a half years he never came here, he never entertained the devotees.

Prabhupāda: The Śaṅkarācārya was poison.

Mahāṁsa: Yes. But then since last six to seven months, he has been completely convinced about us, and he has been going around collecting money from other Marwaris for the temple construction. He was simply convinced by seeing the "Hare Kṛṣṇa" film. And by seeing the Deities he was so much taken aback, and he was so much wonderstruck with the Deities which he saw on the film.

Prabhupāda: You were also present then?

Mahāṁsa: Not here. Before, about six to seven months back. I had shown him the film privately in my room. That was the time when he was completely convinced about it, and he started collecting afterwards for us. Now all these people are coming. Because by heart they are all Vaiṣṇavas. All these Marwaris, their Deity is Kṛṣṇa. And there's not a single Kṛṣṇa temple in Hyderabad. So last few days . . .

Prabhupāda: He is the head.

Mahāṁsa: He's the head. He himself never gave. And we went a hundred times to him.

Mahāṁsa: Yes. And today also he was there in the morning. Now he will definitely give. You had also previously said that they are very conservative. But once they take it up, then they will take it up very nicely.

Mahāṁsa: (laughs) Yes, that's exactly what they do.

Mahāṁsa: Yes, these people are the head of the Marwari community. They don't know how to live. They live in these slums, which we saw today. They live all around that area. They are crore-patis. They have crores of rupees.

Prabhupāda: To live very gorgeously is not good.

Prabhupāda: Even though they're not . . . you cannot say not . . . they are clean. I have seen in Bombay even the poorest man, his house, and a Parsi gentleman, his house. Kitchen habits. A Parsi's kitchen is so nasty. And here you see this poor man's house, they are neat. Their utensils, how much cleansed. I had been in Parsi kitchen. All the pots black. Nothing is cleansed. For eating they use this china. So clean or unclean cannot be understood. Simply washed. But so far the kitchen pots, all are . . . in our also, when it is handled by these (chuckles) European, American devotees, the black. Down, it is black. That should not be black. It must be cleansed.

Mahāṁsa: By the heat, if you use wood, it brings up a lot of soot.

Prabhupāda: But it must be cleansed daily.

Mahāṁsa: It should not come on your finger if you touch it, that black thing.

Prabhupāda: Not even you cannot see black, any black spot. Then it is clean. Otherwise not clean. If there's a single black spot, it is not clean. You can see from this poor class of men, how their utensils are cleansed. Before taking water the jug, the waterpot, you'll like to drink water from it. In our school days there were sweeper, they were a different quarter. So you like to sit down. So clean. The sweeper, cleansing the toilet, bhangi. But when you come to his house, living quarter, oh, it is so clean—the bed, the room, the utensils. And they also will take twice, thrice bath, then they will eat. That is the Hindu culture. Even the sweeper class, lowest class. And I have seen one sweeper class who were in Allahabad, regularly worshiping Deity. Very nice worship.

Mahāṁsa: So a Vaiṣṇava, then.

Prabhupāda: They take initiation from the Vṛndāvana Goswamis and they follow strictly rules and regulations. Cleanliness is very essential. In English also it is said cleanliness is next to godliness. Everything should be, especially temple. It will attract them. And we are singing daily, śrī-vigrahārādhana-nitya-nānā-śṛṅgāra-tan-mandira-mārjanādau. Tat-mandira-mārjana. Mārjana means cleanliness. And want of cleanliness means laziness. If you are lazy you cannot keep clean. "Ah, let me sleep for the time being." That is mode of ignorance. Tamo-guṇa. So we have to conquer over rajo-guṇa, tamo-guṇa. Tadā rajas-tamo-bhāvāḥ (SB 1.2.19). Then there is question of coming to the platform śuddha, sāttvika. Sattvaṁ viśuddhaṁ vasudeva-śabditam (SB 4.3.23). Where is this verse? In Caitanya-caritāmṛta.

Pradyumna: In the Caitanya-caritāmṛta is quoted? Ādi-līlā? (looks for book)

Mahāṁsa: Shall I go and bring the agreement?

Prabhupāda: Yes. The Western world is very busy manufacturing this machine. And they are thinking this is advancement of civilization.

Prabhupāda: That is not advancement.

Hari-śauri: They can't see any use for philosophy and fine arts any more.

Prabhupāda: Because they do not know what is soul.

Hari-śauri: They don't know what the point if it is.

Hari-śauri: They stick him in the ground. (laughs) Put him in a box.

Prabhupāda: But why this happened, this "why" question does not come. They are so dull. What that thing missing? And these rascal scientists will theorize, "The blood becomes white, this becomes that, that becomes that." And do it. If the blood has become white, then make it red. Mix some color or chemical and bring him to life. "No, the life-giving substance is lost." Oh, life-giving substance is not lost. So many germs are coming. Why do you say the life-giving substance is lost? It is there. They do not consider all these things. If matter is life-giving substance, matter is there. Decomposed matter is also matter. Just like stool—a decomposed remnants of foodstuff. That is also matter. Stool is also matter. The same kṣitir . . . (indistinct) . . . bhum is there. The earth is there, the water is there, the heat is there. What is the loss there? And actually you see from this matter, from the stool so many worms are coming out. How do you say that the life-giving matter is missing? That you cannot explain. Still they will not accept that the soul is gone. That individual soul is gone. This is their intelligence. Hmm. Give me that stamp. Round stamp. So the post . . . (break) (end)