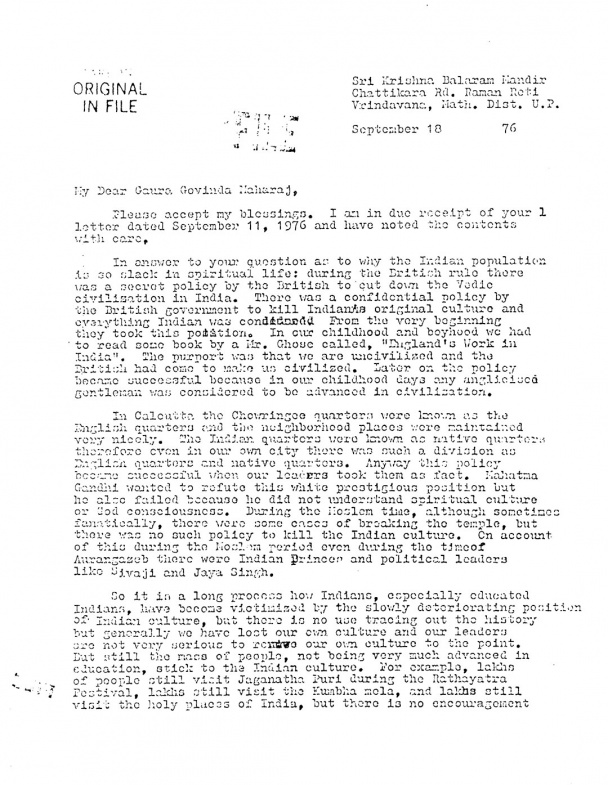 My Dear Gaura Govinda Maharaj,
Please accept my blessings. I am in due receipt of your letter dated September 11, 1976 and have noted the contents with care.

In answer to your question as to why the Indian population is so slack in spiritual life: during the British rule there was a secret policy by the British to cut down the Vedic civilization in India. There was a confidential policy by the British government to kill India's original culture and everything Indian was condemned. From the very beginning they took this position. In our childhood and boyhood we had to read some book by a Mr. Ghose called, "England's Work in India". The purport was that we are uncivilized and the British had come to make us civilized. Later on the policy became successful because in our childhood days any anglicised gentleman was considered to be advanced in civilization.

In Calcutta the Chowringhee quarters were known as the English quarters and the neighborhood places were maintained very nicely. The Indian quarters were known as native quarters therefore even in our own city there was such a division as English quarters and native quarters. Anyway this policy became successful when our leaders took them as fact. Mahatma Gandhi wanted to refute this white prestigious position but he also failed because he did not understand spiritual culture or God consciousness. During the Moslem time, although sometimes fanatically, there were some cases of breaking the temple, but there was no such policy to kill the Indian culture. On account of this during the Moslem period even during the timeof Aurangazeb there were Indian Princes and political leaders like Sivaji and Jaya Singh.

So it is a long process how Indians, especially educated Indians, have become victimized by the slowly deteriorating position of Indian culture, but there is no use tracing out the history but generally we have lost our own culture and our leaders are not very serious to revive our own culture to the point. But still the mass of people, not being very much advanced in education, stick to the Indian culture. For example, lakhs of people still visit Jaganatha Puri during the Rathayatra Festival, lakhs still visit the Kumbha mela, and lakhs still visit the holy places of India, but there is no encouragement [TEXT MISSING] by the leaders. It is only a continuation of the original culture. So there is no hopelessness; if we revive Krishna consciousness in a systematic way, within a very short time we can revive our original Indian culture on the basis of the teachings of Lord Krishna and the Bhagavad-gita. So we have to work very hard for this purpose and if you follow the path of Sri Caitanya Mahaprabhu, it will be very easily done.

Arrange for printing the books. We shall supply paper that we have now got from the government. But without the paper you can take estimates from the printers to find the cheapest. I hope this meets you in good health.

n.b.—I have three questions: I may come there by the middle of October, what is the climate like? I have heard that there is a famous fountain there whose waters are very digestive for people who are sick and it is a good tonic, is this true, do you know of this? Did you register the lands, complete the forms?