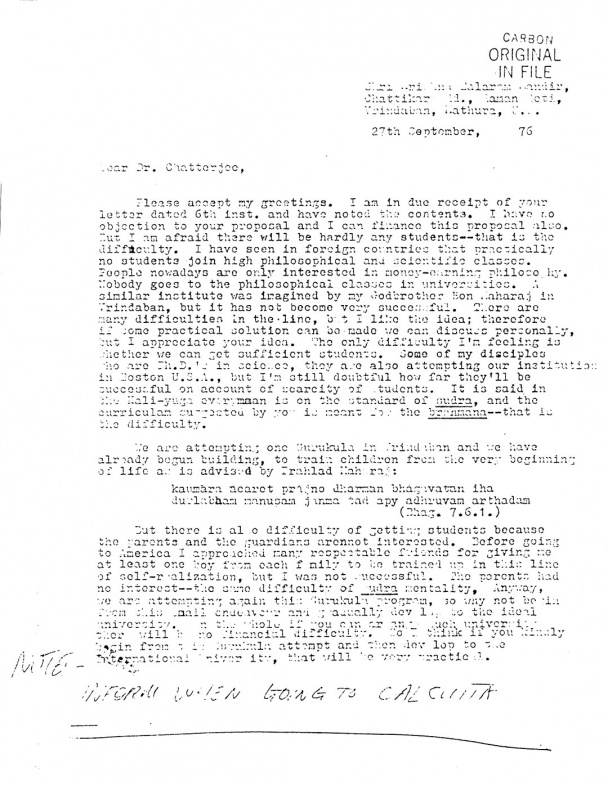 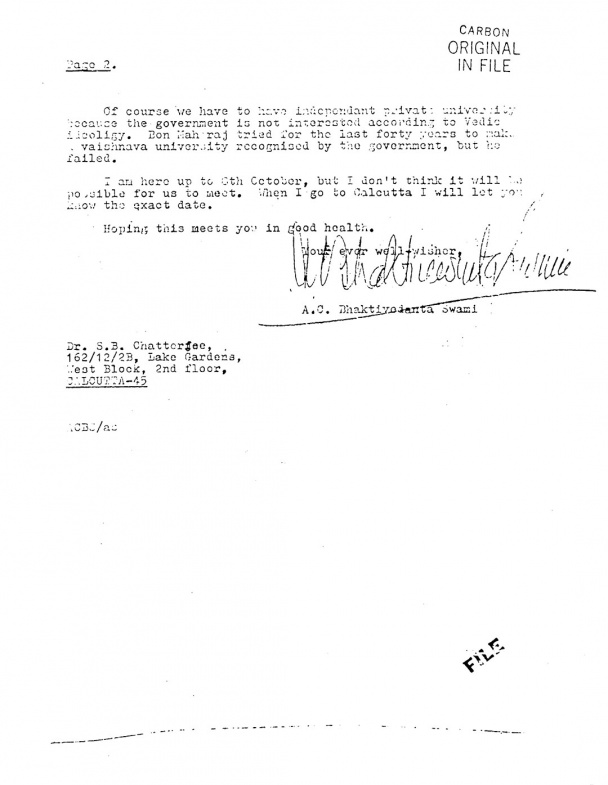 Dear Dr. Chatterjee,
Please accept my greetings. I am in due receipt of your letter dated 6th inst. and have noted the contents. I have no objection to your proposal and I can finance this proposal also. But I am afraid there will be hardly any students—that is the difficulty. I have seen in foreign countries that practically no students join high philosophical and scientific classes. People nowadays are only interested in money-earning philosophy. Nobody goes to the philosophical classes in universities. A similar institute was imagined by my Godbrother Bon Maharaj in Vrindaban, but it has not become very successful. There are many difficulties in the line, but I like the idea; therefore if some practical solution can be made we can discuss personally, but I appreciate your idea. The only difficulty I'm feeling is whether we can get sufficient students. Some of my disciples who are Ph.D.'s in science, they are also attempting our institution in Boston U.S.A., but I'm still doubtful how far they'll be successful on account of scarcity of students. It is said in the Kali-yuga everyman is on the standard of sudra, and the curriculum suggested by you is meant for the brahmana—that is the difficulty.

We are attempting one Gurukula in Vrindaban and we have already begun building, to train children from the very beginning of life as is advised by Prahlada Maharaja:

But there is also difficulty of getting students because the parents and the guardians are not interested. Before going to America I approached many respectable friends for giving me at least one boy from each family to be trained up in this line of self-realization, but I was not successful. The parents had no interest—the same difficulty of sudra mentality. Anyway, we are attempting again this Gurukula program, so why not begin from this small endeavor and gradually develop to the ideal university. On the whole if you can arrange such university there will be no financial difficulty. So I think if you kindly begin from this Gurukula attempt and then develop to the International University, that will be very practical.
NOTE: INFORM WHEN GOING TO CALCUTTAHANDWRITTEN

Of course we have to have independent private university because the government is not interested according to Vedic ideology. Bon Maharaja tried for the last forty years to make a Vaisnava university recognized by the government, but he failed.

I am here up to 8th October, but I don't think it will be possible for us to meet. When I go to Calcutta I will let you know the exact date.