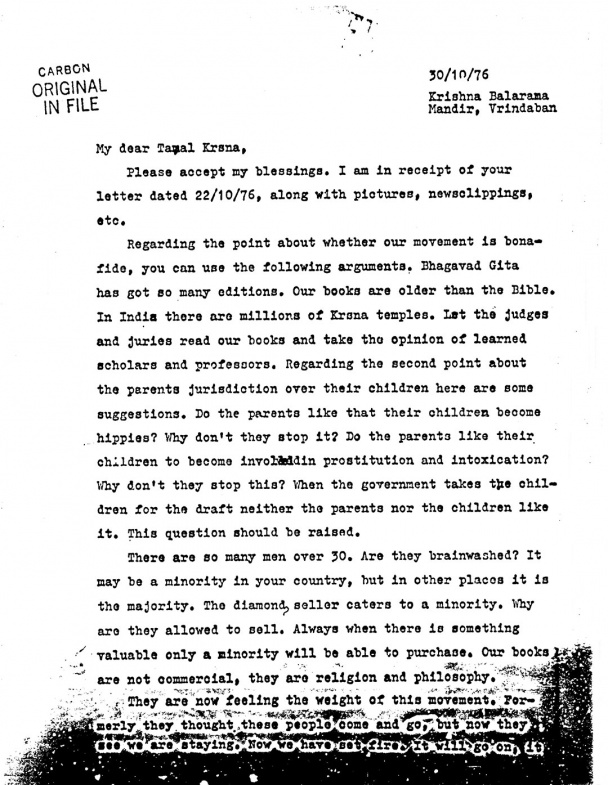 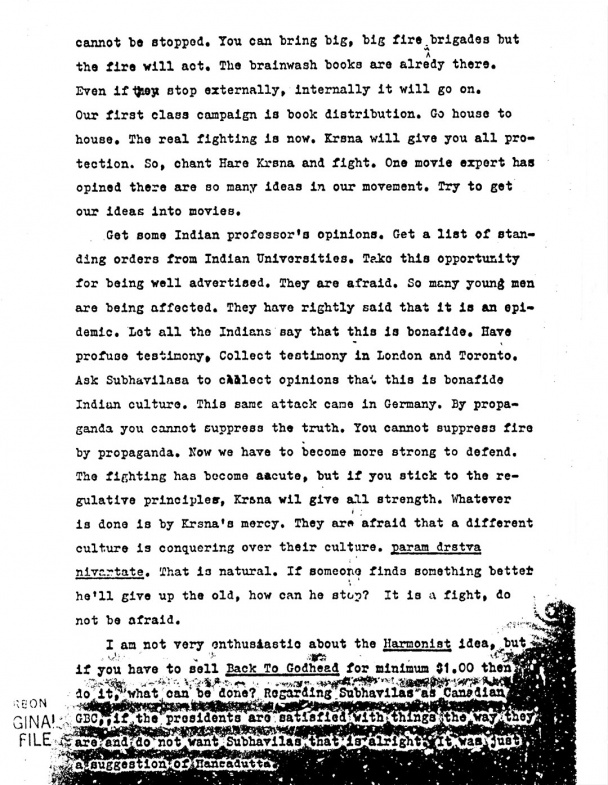 Please accept my blessings. I am in receipt of your letter dated 22/10/76, along with pictures, newsclippings, etc.

Regarding the point about whether our movement is bona fide, you can use the following arguments. Bhagavad Gita has got so many editions. Our books are older than the Bible. In India there are millions of Krsna temples. Let the judges and juries read our books and take the opinion of learned scholars and professors. Regarding the second point about the parents jurisdiction over their children here are some suggestions. Do the parents like that their children become hippies? Why don't they stop it? Do the parents like their children to become involved in prostitution and intoxication? Why don't they stop this? When the government takes the children for the draft neither the parents nor the children like it. This question should be raised.

There are so many men over 30. Are they brainwashed? It may be a minority in your country, but in other places it is the majority. The diamond seller caters to a minority. Why are they allowed to sell. Always when there is something valuable only a minority will be able to purchase. Our books are not commercial, they are religion and philosophy.

They are now feeling the weight of this movement. Formerly they thought these people come and go, but now they see we are staying. Now we have set fire. It will go on, it cannot be stopped. You can bring big, big fire brigades but the fire will act. The brainwash books are already there. Even if they stop externally, internally it will go on. Our first class campaign is book distribution. Go house to house. The real fighting is now. Krsna will give you all protection. So, chant Hare Krsna and fight. One movie expert has opined there are so many ideas in our movement. Try to get our ideas into movies.

Get some Indian professor's opinions. Get a list of standing orders from Indian Universities. Take this opportunity for being well advertised. They are afraid. So many young men are being affected. They have rightly said that it is an epidemic. Let all the Indians say that this is bona fide. Have profuse testimony. Collect testimony in London and Toronto. Ask Subhavilasa to collect opinions that this is bona fide Indian culture. This same attack came in Germany. By propaganda you cannot suppress the truth. You cannot suppress fire by propaganda. Now we have to become strong to defend. The fighting has become acute, but if you stick to the regulative principles, Krsna will give all strength. Whatever is done is by Krsna's mercy. They are afraid that a different culture is conquering over their culture. param drstva nivartate (BG 2.59). That is natural. If someone finds something better he'll give up the old, how can he stop? It is a fight, do not be afraid.

I am not very enthusiastic about the Harmonist idea, but if you have to sell Back To Godhead for minimum $1.00 then do it, what can be done? Regarding Subhavilas as Canadian GBC, if the presidents are satisfied with things the way they are and do not want Subhavilas that is alright. It was just a suggestion of Hamsaduta.

Hoping this will meet you in good health.