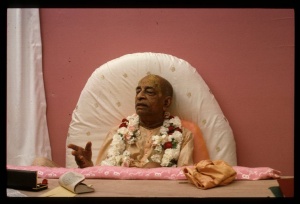 (someone preaching in temple in Oriya over loudspeaker in background)

Indian boy: I want to read some books published by Swāmījī. Can I get?

Prabhupāda: Yes, why not? You can have here. We have got forty standing orders from this city in different libraries, colleges. So you can take books from any library, or if you like you can purchase also.

Prabhupāda: Yes. So many libraries, they have ordered. There is a list in Orissan. (rings bell; aside:) You can give me little, little sample . . . (break) . . . for life that it is a dead body. A dead body. So what is the use of decorating a dead body? So if anyone accepts Christ actually and his instruction, then it proves that he has got a good soul. Otherwise what . . . He's dead body. That's a fact. If one accepts that Christ said, "Thou shall not kill. Thou shall not do this," if one is actually a person with soul, they must accept this. Otherwise where is the use? Dead body. The same thing, as we say, aprāṇasya hi dehasya maṇḍanaṁ loka-rañjanam (Hari-bhakti-sudhodaya 3.11). What is the use of decorating a dead body? A dead body means soul-less. When the soul is not there, it is called dead body. So even one has got the soul, but he does not act . . . they possesses the soul, then it is dead body. So when we shall hear about the land? One program is suspended. That program is for constructing a house for me.

Prabhupāda: Yes. I have suspended it. So first of all let us see how much land we are going. Then we shall select.

Gargamuni: Well, I feel this land acquisition is not going to take place so soon, 'cause as . . . (break)

Prabhupāda: Yes. Why should we think?

Gargamuni: That has always been your program.

Prabhupāda: Yes. Why should we think Kṛṣṇa is poor man?

Gargamuni: You used to give us ISKCON bullets when we came.

Prabhupāda: (laughs) Yes. You were from the very beginning. Alone, I was preparing. "Give them at least one or two cāpāṭis. That's all."

Gargamuni: You were keeping in the corner . . .

Gargamuni: Yes, so much. There was always a stock of something.

Prabhupāda: That atta, one bag.

Gargamuni: One bag a week.

Prabhupāda: And Kīrtanānanda was preparing at a time at least ten cāpāṭis in that oven, very quickly. Yes. And Jadurāṇī was rolling. Everyone was engaged. And on Saturday we prepared so many samosās, purīs and sweetballs, kept in stock, and Sunday people were coming. At least seventy-five guests.

Gargamuni: It was packed up.

Prabhupāda: Acyutānanda's mother was coming. Sometimes your mother came? No.

Gargamuni: Not for a feast, but she came.

Prabhupāda: No, she used to come. And kissing you. (laughter) He's very pet son of his mother. Sometimes I told her, "Mrs. Bruce, you can give us some money." "I have given my two sons!" And "That's all right."

Prabhupāda: I have met his mother. Is very nice lady.

Rāmeśvara: My family is very much afraid that they may lose another son to this movement. (Prabhupāda laughs) They are very afraid of that. They know that this is so good. The books are so convincing.

Prabhupāda: But I don't think your mother was any time angry upon me.

Rāmeśvara: We have one mother in Los Angeles of a girl named Līlā-śakti. She's a big book distributor. And her mother, she loves this movement so much that when the deprogrammers start debating us, she stands up and yells at them that "My daughter was on drugs, hippie, before she came to this movement. This movement has saved her. If I had known about this movement when I was a young girl, I would have joined this movement!" On television she's speaking like that, very strongly: "You have no right to criticize! You don't know anything about this movement."

Rāmeśvara: She says, "You just come over to my house for lunch and I'll tell you all about this movement, how nice it is." She started this club, Parents for Kṛṣṇa.

Prabhupāda: Oh, she is very sincere. And her daughter, this Līlā . . .? What is?

Gargamuni: Yes. They wrote that letter.

Prabhupāda: Yes. No, they personally came. And many fathers came to Los Angeles to give me thanks: "Swāmījī, it is our great fortune that you have come." They said like that.

Gargamuni: Śrīla Prabhupāda, there's also another program which I think requires some financial assistance, is this boat program. In one month they sold ten thousand books, a group of ten men. And they go to so many villages. And I think if we can get a mechanized boat, a larger boat, they can go to so many places which usually takes so much time, because generally for them . . .

Prabhupāda: . . . then you'll require mechanics. You cannot ply or . . . independently. If some mechanical wrong is there, then you are . . .

Gargamuni: No, we have our own men who service our vehicles. They know diesel engine.

Prabhupāda: So there is no objection, but too much mechanical means you have to depend. You consider that.

Gargamuni: But then sometimes there's also no wind, and they have to sit for three or four days.

Prabhupāda: So wind you cannot move. That is not safe.

Gargamuni: No, if there's no wind, then they can't move. And they have to have these men to . . . They walk on the shore and push the boat, and it takes so long. And there's so many villages that they can do. They can do thirty thousand books in one month if they had a boat which could travel freely. And I . . .

Prabhupāda: Then what will happen to this boat?

Gargamuni: No, we can use both. But we want to expand the program.

Prabhupāda: Hmm. So I have no objection. Money can be supplied, but it may not be another burden. That's it.

Gargamuni: No, we'll investigate the ship, because in Calcutta is a very big center of shipbuilding.

Gargamuni: They build big ships there. And we don't have to limit our traveling simply in the river. We can also go along the coast of Bengal and also Orissa. There's so many villages. And if we have . . .

Prabhupāda: Orissa . . . That means you have to go by the sea, Bay of Bengal

Gargamuni: Bay of Bengal. And there's so many villages along there.

Gargamuni: You can do so much saṅkīrtana.

Prabhupāda: If . . . The Ganges comes in this way, then you come to Bengal, Bay of Bengal—this side, Orissa, this side, East Bengal. Is it not?

Gargamuni: Yes. They recently went to Sagar Island, and they did very nice saṅkīrtana there. So . . . But this boat is not large enough, and it's also very . . . It takes so much time.

Gargamuni: But you can't get a larger boat than that, and it's too small. Our temple is too small. We need a longer boat with a larger temple for the . . .

Prabhupāda: You require a steamer-like?

Gargamuni: A small steam . . . a small fishing boat like those fishing boats. They have these big . . .

Prabhupāda: It is run by petrol?

Gargamuni: Yes. I've seen them in Calcutta. Next time you come, we can walk on the Ganges side. They're about sixty feet long.

Prabhupāda: So they are prepared in Calcutta?

Gargamuni: Yes. They make them there.

Prabhupāda: You can have.

Gargamuni: And we can get a custom-made ship. Your Divine Grace may also want to take. From Māyāpur we can go by boat. It takes only five or six hours by boat if we have an engine, and you may like the nice trip.

Prabhupāda: So how you go?

Gargamuni: And we can have cruises . . .

Prabhupāda: No, how you go? You have to come to the sea? No.

Gargamuni: No. No. We go from Calcutta to Māyāpur by boat.

Prabhupāda: By boat. Then we can pass through this Naihati.

Prabhupāda: Eh? Naihati is the other way?

Gargamuni: You pass through . . . See, by this present boat it takes about ten days from Calcutta to Māyāpur. It takes a long time. And if there's no wind, they have to walk on the shore. And the boat is too small now for our program.

Prabhupāda: No, then you can take. What is the price?

Gargamuni: Well, I can only estimate. I have not gone deeply into it. But it will cost a few lakhs of rupees.

Gargamuni: Yeah. (Prabhupāda laughs) Well, it's a huge boat. But it can go on the sea. And we can do the whole coast of India. We can go all around the coast and do all the villages.

Prabhupāda: Why so much? Few lakhs?

Rāmeśvara: It's dangerous, going on the sea.

Gargamuni: No, not if you have proper navigation. And this sea is not so . . . It's not a rough sea.

Prabhupāda: Bay of Bengal is rough.

Gargamuni: But Sagar Island, isn't that in the Bay?

Prabhupāda: But they are accustomed. They can . . .

Rāmeśvara: We need some pretty good men if you start sailing the waves.

Gargamuni: No, we'll get a retired man. They'd love the work. Just like we have that engineer. He's a retired engineer. We pay him some small salary . . .

Prabhupāda: Why you want to go by boat to the coast?

Gargamuni: Because you can't get by road. There's no roads. They're dirt roads. Many of the villages you can't get to except along the water routes.

Prabhupāda: Hmm. But so far I know, it is very rough, Bay of Bengal.

Gargamuni: Well, we can invest . . . I know these ships in Calcutta. I saw at the pier at least five or six of these ships, these fishing boats, and they go up and down. I know if we take a . . .

Prabhupāda: No, if you get a big boat, that is all right—ferry boat. But if you get a small boat, the sea is very rough.

Gargamuni: Sixty feet. Sixty, seventy feet. My father had a sixty-foot boat, and we went in the Atlantic Ocean, and it wasn't so bad.

Prabhupāda: And here it is sixty.

Gargamuni: You can get sixty, seventy. Whatever we want we can custom make. But then we can expand this. They did ten thousand books. We can do more books. And there's so many villages.

Prabhupāda: Yes, there are.

Gargamuni: And now in Orissa we have so many books. We could send a boat here and do the whole coast. The coast of Orissa, we could sell so many books in these villages.

Prabhupāda: So I have no objection. You consult amongst yourselves. I want expansion, that's all, some way or other. (laughs)

Gargamuni: But you can rest assured that I will investigate and see.

Prabhupāda: Don't make it a burden.

Devotee: It is not the first day that it has happened.

Devotee: It is not the first night that it has happened.

Prabhupāda: Daily it is going on? Eh?

Devotee: Last night we had electricity, but the nights before that, we had no electricity.