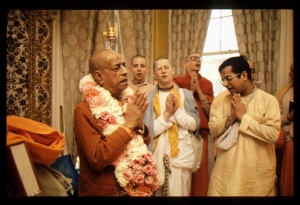 Prabhupāda: My foreign disciples, they could not understand either Hindu or Oriya. So for this movement, I am very much obliged to these American boys. The history of this movement is that my Guru Mahārāja, His Divine Grace Bhaktisiddhānta Sarasvatī Ṭhākura, and before him, Bhaktivinoda Ṭhākura, they had an intense desire to preach Caitanya Mahāprabhu's message throughout the whole world. That was the intense desire of Caitanya Mahāprabhu.

He wanted it. Because this is the only message to bring the human society into oneness. There is no other alternative. That is confirmed in the Śrīmad-Bhagavatam:

So this Kali-yuga, as described by our Gaura-Govinda Mahārāja, a bhankara (?) yuga. But there is one opportunity, kīrtanād eva kṛṣṇasya mukta-saṅgaḥ paraṁ vrajet. This is the message of Śrī Caitanya Mahāprabhu, and a little attempt was made at the age of seventy years. Of course, my Guru Mahārāja asked me . . . When I was twenty-five years old, I first met him. He asked me to do this task. But I thought that "Let me adjust my family life, and then I shall do this." But I took it very seriously. But family life, never it was adjusted, so he forced me at the ripe old age to take up this work. So I tried to make an experiment that nobody had done: "Let me try." But I tried sincerely, so by the grace of my Guru . . . Guru-Kṛṣṇa, they favored me. When I was on the Commonwealth Jetty, Pier, yes, I was thinking that "Who will hear me? As soon as I shall say to these people that 'No illicit sex, no meat-eating, no intoxication and no gambling,' immediately they will say, 'Please go home. Don't talk here.' " Because I know that. This is their daily life. But by the grace of Kṛṣṇa they agreed. All these students, all these disciples . . . I do not accept anyone as my disciple that "You can do whatever you like." No. My first condition is that "You must be sinless." At least you must try to become sinless, because in the Bhagavad-gītā we understand,

Without being sinless, one cannot make any advance.

So in this age practically there is nil who is a dhīra. Everyone is adhīra. But the saṅkīrtana movement is so nice, as it is spoken by Śrīnivāsa Ācārya on behalf of Narottama dāsa Ṭhākura, kṛṣṇot-kīrtana-gāna-nartana parau premāmṛtāmbho-nidhī dhīrādhīra-jana-priyau. This movement is so nice that it will be pleasing to the dhīras and the adhīras.

So the disease is there, but the remedy is also there. Ceto-darpaṇa-mārjanam (CC Antya 20.12). We are misunderstanding. The human society, they are trying to adjust things by the United Nations, but it is not possible. United Nations cannot do. In Melbourne I was speaking, so I accused the United Nations, "They're assembly of barking dogs." Because you cannot be united on this material platform. If you keep yourself that "I am dog," "I am tiger," "I am American," "I am Indian," "I am brāhmaṇa," "I am śūdra," then there is no question of United Nations. United Nations is possible when sarvopādhi-vinirmuktaṁ tat-paratvena nirmalam (CC Madhya 19.170). You have to become purified on Kṛṣṇa consciousness, not "I am American," not "I am Indian." No. This will not help.

So factually we see that these Americans, Europeans, they are Christian, Jews, or there are Muhammadans also in our movement, Africans, all over the world, but they no more think that he is African or Indian or American. They think Kṛṣṇa dāsa. As Caitanya Mahāprabhu taught us, jīvera svarūpa haya nitya kṛṣṇa dāsa (CC Madhya 20.108-109). Unless we come to that platform, that we are servants of Kṛṣṇa, there is no question of unity. That is brahma-bhūtaḥ stage.

Unless you come to that brahma-bhūtaḥ stage, that "I am not this body. I am soul, ahaṁ brahmāsmi. I am part and parcel of the Supreme Brahman"—paraṁ brahma paraṁ dhāma pavitraṁ paramaṁ bhavān (BG 10.12)—there is no question of unity. So Caitanya Mahāprabhu wanted to introduce this movement how actually there can be possibility of being united. That is possible. That is not difficult because they are all sons of Kṛṣṇa. Sarva-yoniṣu kaunteya sambhevanti . . . ahaṁ bīja-pradaḥ pitā (BG 14.4). He's the original father. So this Kṛṣṇa consciousness movement is trying to introduce in the human society, and not on my conviction, on the assurance of the śāstras, that if you want to be united, you'll have to come to this platform of Kṛṣṇa consciousness; otherwise it is not possible.

So I do not wish to take much of your time. It is already late. Kindly take little prasādam, whatever they have arranged, and I thank you very much for your coming in this occasion. And I must also thank Śrīmatī Cori (?) Ānanda, this young girl. Out of her own accord, she contributed this piece of land so that we can begin Kṛṣṇa consciousness movement in this city.

Thank you very much. (end).