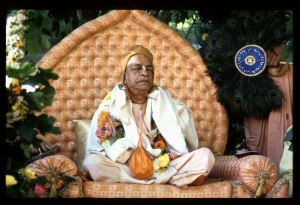 Prabhupāda: . . . how such gṛhastha. It is never recognized.

Prabhupāda: No self-interest—that is the difference. I wanted to serve. That is the difference. But now it is clear. None of them, they want to serve. They want to make one establishment so that they can eat and sleep. Of course, there is some preaching, but if there is—preaching is the purpose—why they should separate? That is not the purpose. The purpose is that "I must have some separate establishment as ordinary karmīs they have got their separate establishment." Preaching is not that, neither they can preach with enviousness. So, what to do?

Jayapatā.ā: In any case, he has not yet accepted, and it will take sometime to build your house.

Prabhupāda: Yes. That is not . . . on principle. I am talking on the principle. That is not yet. It will take some, at least two, three years or at least one year. But this is the position. This Dāmodara Mahārāja you have already experience about . . . (laughs)

Bhavānanda: Yes. And he is like an ant compared to them.

Bhavānanda: He is like an ant. They are more envious.

Hari-śauri: He has no intelligence.

Jayapatākā: Even yesterday, Madhusūdana Mahārāja, he was insulting Dāmodara to his face. He said, Dāmodara Mahārāja . . . his brahmacārī asked him, "Are you coming?" And he said: "No. I'll stay." And Madhusūdana said: "Yes, you have to stay and give all the reports to Śrīdhara Mahārāja. Getting all the information, now you have to give all the reports. You have much important things to discuss. You stay and give all these secret reports."

Jayapatākā: Yes. I was surprised.

Jayapatākā: When you took rest and they were downstairs. So he said like that to Dāmodara.

Prabhupāda: Oh. He is appointed to take secret reports.

Jayapatākā: Yes. I guess he goes and gets the report.

Hari-śauri: That's his business. He goes from one place to another, gossiping.

Jayapatākā: Who appointed, that I don't know. But that's his business. And then Dāmodara was telling about his journey on the bus and train, but Madhusūdana Mahārāja didn't seem very interested. He criticizes, "Why do you go to Kumbha-melā? What is going for bathing? What is special about that bath?" And then he challenged that, "We go for preaching." "But what preaching you did there?" "No, I preached, gave lectures."

Jayapatākā: Allahabad. One advantage is they don't know any . . . of course now, we have so many Bengali devotees. They don't know much English. They can generally speak most only in Bengali, most of these Godbrothers.

Jayapatākā: They'll influence him not to come.

Prabhupāda: No, whatever they like, they do, but I think we shall not insist on this point, because we cannot stop the association.

Jayapatākā: And if we hear anything against Your Divine Grace it is more painful than death for us.

Prabhupāda: They are very envious.

Jayapatākā: There's one good news, Śrīla Prabhupāda. Gargamuni called last night. Mahendra had informed him that we're going to have our 747 jumbo jet land in Calcutta.

Jayapatākā: It will be the first commercial flight. They have 310 people coming on the flight.

Prabhupāda: So the government will receive.

Jayapatākā: Then the government will receive them. It will be publicized all over India.

Prabhupāda: Very good. So when they are coming?

Prabhupāda: What is the date today?

Prabhupāda: So in the meantime, your . . . this thing will be finished or not?

Jayapatākā: They all say that it will be finished in about five days, the wiring, and five days the flooring. And the bathrooms are already finished on the first floor. They're putting the fittings, and half of them are put in.

Bhavānanda: The floors will not be polished, but . . .

Bhavānanda: Water will be there, electricity, and clean.

Jayapatākā: So this morning you won't go . . . be going on a walk. You're not feeling up to a walk this morning? It affected your kidney or your digestion?

Prabhupāda: That I cannot say. But the foodstuff is not digesting, that can I say. I am not feeling at all appetite.

Bhavānanda: Śrīla Prabhupāda, I haven't digested either from yesterday.

Prabhupāda: Ācchā? What is the reason?

Satsvarūpa: I don't know. Eating here was very nice, and now, since yesterday . . .

Hari-śauri: I digested all mine. (laughter)

Jayapatākā: Śrīdhara Swami is such a learned person . . . (break)

Prabhupāda: . . . here is envious. So envious, upekṣā, means they should not be associated. Īśvare tad-adhīneṣu bāliśeṣu dviṣatsu ca (SB 11.2.46). Four division: God, īśvara; and tad-adhīneṣu, devotees, those who have accepted . . . (break) That is devotee. Bāliśa, those who are innocent. Preaching . . .

Prabhupāda: Yes. They should be trained up. And dviṣatsu, envious. Four division. So four divisions you have to treat in different ways. Prema, Lord; prema, love. Maitrī, friendship with devotees. Kṛpā bāliśu, those who are innocent, the kṛpā, let them learn. And upekṣā. As soon as come to the dviṣat, no cooperation. Keep aloof. So when we try to keep aloof from the envious, that is not our enviousness. That is just to avoid trouble for preaching work. Not that we hate them. But because . . . when you avoid a snake, it does not mean I hate the snake, but because he is harmful we have to take precaution. This is the statement of Bhāgavatam. And when you are in the mahā-bhāgavata stage, first grade, that time, paramahaṁsa, nobody's enemy, nobody's friend. Everyone . . . that we cannot imitate. It is not . . . preacher, even if he's mahā-bhāgavata, he comes to the second stage. Just like Guru Mahārāja, he's mahā-bhāgavata, but still he had to come to the second stage, he had to take precaution. That is natural. There are so many enemies of . . .

Jayapatākā: We were remembering how Nitāi had been poisoned. Nitāi and Yogānanda are your disciples. They were recently poisoned.

Prabhupāda: Hmm. By whom?

Jayapatākā: That . . . so many devotees are very innocent. They'll fall prey. They'll be impressed by some fancy talking and then can be misled.

Jayapatākā: But Your Divine Grace is very expert in very carefully training them up stage by stage.

Jayapatākā: While other, they like to go right to the higher philosophy.

Prabhupāda: Last night I could not work.

Arundhatī: Pradyumna just gave me a tape. It must have been from the other night?

Prabhupāda: Yes. Just to give them protection. (pause) So when we avoid envious person, that is the injunction of the śāstra. This man wrote to the chief minister or prime minister complaining about them?

Jayapatākā: About his electric connection.

Prabhupāda: No, no. This Dāmodara Mahārāja.

Jayapatākā: Yes? He has gave false name; he signed it false. He said that we're coming with banduka (gun) and chasing the sādhus, and that we're harassing people, beating them. So many things he wrote, false. He said: "Most envious is Bhavānanda, and just like him is Jayapatākā." Then he said that, "Tapomaya, he is simply their lackey. He goes and harasses people," this and that. Then the police came, and they showed us the letter, and we both looked at each other and said, "This looks like something that Dāmodara Mahārāja would do." So we advised the police, "We think that he did it." So the police went over there, and they said . . . as soon as they had the letter he started shaking. They said, "Is this your letter?" He said, "No." He says: "You wrote this letter." Because they could see he was nervous. They are experienced. They said: "All right, you give your signature." And then he signed, and although he tried to change it, they said: "No. This is the same signature. Now we're going to take you to the thānā." (police station) "No, no. I am sometimes a little crazy." Āmi ekṭu pāgala. "I didn't mean this . . ." Then he admitted. But he sent that to the chief minister.

Prabhupāda: He is dangerous. He has proved dangerous in so many ways. (end)