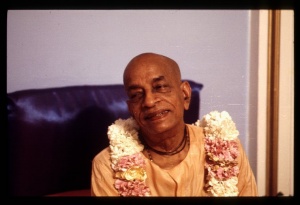 Guest: Let me ask you one question. Now your God is Hare Kṛṣṇa, and Kṛṣṇa . . .

Prabhupāda: God is one.

Guest: God is one, that's right.

Prabhupāda: Your God, my God—there is no difference.

Guest: God is one.

Prabhupāda: There is no such thing.

Prabhupāda: There is no "my religion" also. If God is one, then to know God or to abide by the orders of God is religion. According to Bhāgavata definition: dharmaṁ tu sākṣād bhagavat-praṇītam (SB 6.3.19). Dharma means the orders or the law given by God. Just like law means the order given by the state. Nobody can manufacture law at home. The state has ordered, "Keep to the left," that is law. You cannot make "Keep to the right." That is not law. Therefore religion means the order of God. So we must know what is God and what is His order—then you are religious. Otherwise there is no religion. If there is no government, then were is the law? There is no question of law. Law means there must be government, and the order given by the government that is. Similarly . . .

Tamāla Kṛṣṇa: Do we have a book which teaches the rules of our religion?

Guest: You have a book.

Prabhupāda: The Bhagavad-gītā. We have got many books—this is the beginning, A-B-C-D.

Prabhupāda: Yes. First of all let us learn A-B-C-D, then you go to higher standards.

Tamāla Kṛṣṇa: We can get him a copy. We have extra copies.

Guest: It is not available in my country.

Bhavānanda: It's not available in Kuwait.

Indian devotee: He is saying: "It is not available in my country."

Tamāla Kṛṣṇa: In Kuwait this book is not yet . . .

Indian devotee: It is available here at the paṇḍāl.

Tamāla Kṛṣṇa: Here we have a copy.

Bhavānanda: We can have one sent to him in Tehran.

Prabhupāda: We have got our center in Tehran, city.

Guest (2): It was last year, about your religion. I saw a picture—Hare Kṛṣṇa, Hare Rama.

Prabhupāda: Yes, we have got many followers in Tehran. In-charge man, formerly his name was Actal.

Prabhupāda: Now he is—I have changed his name— Ātreya Ṛṣi. I have got many Muhammadan disciples. One Dr. Ramzan . . .

Prabhupāda: He is my disciple. In Portland University. I have given him the name Rāmānanda.

Guest: Well, actually sir, I respect your religion, but I would like just to read some books.

Prabhupāda: You will benefit.

Guest: I will take some books with me. I just came from Bombay Hospital after treatment, and the doctor allowed me. I've been walking like this, and then I came here. This gentlemen see me and offered the opportunity to meet you.

Guest: Thank you very much.

Tamāla Kṛṣṇa: Can you stay for our program this evening? It'll only be for about an hour, hour and a half.

Guest: Yes. Of course I will.

Tamāla Kṛṣṇa: You can stay?

Guest: Thank you very much.

Prabhupāda: We have got also chanting beads.

Guest: Like ours. Yes. This is, you know, in our religion actually before I pray I have to put this in, what do you call it, seyara, we call it seyara. So I have . . .

Prabhupāda: We keep these beads in a bag so that I may not touch here the dust of the floor.

Prabhupāda: Just to protect it, because we chant God's name, so it is not different from God.

Prabhupāda: Yes. Allah means "The great." I think so. "God is great." So in connection with His name, whatever is there, it is great.

Prabhupāda: So I am very glad that you have come. Please try to study the philosophy.

Guest: Thank you very much, sir.

Prabhupāda: Keep his name and address.

Tamāla Kṛṣṇa: You can hold this up? I have pen. (guest writing his name and address) Thank you. Maybe sometime we can visit you there?

Tamāla Kṛṣṇa: Yes, please. (guest writing the address) Which is the address?

Gues (2): This is the address, this is my telephone number.

Tamāla Kṛṣṇa: This is your address?

Tamāla Kṛṣṇa: What does this mean, "State of police."

Tamāla Kṛṣṇa: Are you a member of the police department there?

Tamāla Kṛṣṇa: Inspector of police. So we won't have any difficulty finding you there.

Guest: Of course not, you just call. (laughs)

Tamāla Kṛṣṇa: Very kind of you to give this address.

Guest: Yes, I will stay.