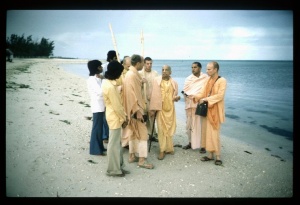 Prabhupāda: So actually my lift will be used once in a day. Then how it will be in order?

Saurabha: We will repair it. It's not that . . . we will make it work, and then no one will touch it.

Prabhupāda: And at the time of my use, if it is out of order?

Tamāla Kṛṣṇa: Maybe you should keep a man there all the time.

Gargamuni: Let's hire an operator. They have lift operators in many of the hotels.

Saurabha: See, they took the fuse out so that we can use it, so we put the fuse back, so the lift works. And then just before you came, someone went in there . . .

Tamāla Kṛṣṇa: Practically the only people who will be here will be your servants and occasionally . . .

Prabhupāda: Nobody should use it. My men should know how to use it, that's all.

Prabhupāda: Yes. He will learn and he will teach, that's all. You teach him. So Lokanātha Swami, your preaching last night was very nice. That chief minister spoke very nicely.

Gopāla Kṛṣṇa: All the points he said were mentioned in our letter to him in which we invited him. Like eighty-four books you have translated, how we found that stone here from six hundred years ago.

Tamāla Kṛṣṇa: Śrīla Prabhupāda wants that speech of his that it can be published in either a magazine or Hare Kṛṣṇa monthly. I took it down on the tape.

Gopāla Kṛṣṇa: Okay. Yes, we have it on a tape.

Tamāla Kṛṣṇa: Okay. It should be published in Hindi.

Gopāla Kṛṣṇa: He was very favorable. He liked the performance.

Prabhupāda: Both he and his wife appear to be devotee.

Gopāla Kṛṣṇa: He is a devotee. He had to go back to his village, which is very far. Otherwise he would have stayed for the play, he told me. He left at eight-thirty. (pause)

Prabhupāda: I think I haven't got such place to live anywhere in the world. (laughs)

Gargamuni: Especially your own building.

Gopāla Kṛṣṇa: This apartment is the best, actually.

Prabhupāda: Los Angeles and in New York, big, big cities they are—London, Paris. But nobody can present such luxurious royal palace.

Gopāla Kṛṣṇa: The drama was very appreciated last night. Samayadi was watching it with us, and he said he would like to arrange a big program in his house.

Prabhupāda: Old Samayadi or his son?

Gopāla Kṛṣṇa: His son. He liked the drama very much.

Lokanātha: It has become one of the main attractions of the public, this Vaikuṇṭha Player performance. After . . . two nights after the program, I inquired from the public on the microphone, "Do you like this drama?" Immediately everybody raised their hands: "Yes!"

Prabhupāda: They were asking me whether they are professional men. "No, no, these all my disciples."

Gopāla Kṛṣṇa: They're actually much better than any of the professional men.

Prabhupāda: Oh, yes. We played Caitanya-līlā in our younger days. So we brought one very famous man, Amritlal Bose. He is one of the three chief men who started theatrical performances in Bengal. Amritlal Bose, Girish Candra Ghosh, and one some Pathan. This Amritlal Bose was a big author also, for writing comic books. And very expert lecturer. So somehow or other, we contacted him, and we used to call him dādā-mahāśaya. Dādā-mahāśaya means grandfather. He was of our grandfather's age. In the evening he was drinking. Very luxurious. So when he came, he said: "Yes, I will give you direction. You are all aristocratic family. But you must know that what is the difference between this professional and this aristocratic family." So he explained that "Caitanya-līlā, in the public theater, anyone can pay eight annas." That eight annas was third-class ticket. Eight annas, one rupee, two rupees and five rupees. "So they can see Caitanya-līlā. Then where is the difference between your playing and their playing?" So he explained that "There must be some difference, that the public, after seeing your playing, they should appreciate so much that they will agree they have never seen such. So I want to train you like that. Are you prepared?" His first condition. So we were boys at the time . . . "Yes, sir. Yes. Whatever you say." Then he said: "Then I take charge of training you." So his next condition was that, "You cannot play unless I say it is all right." So we practiced for more than one year. Still, he did not say that, "You are all right." He did not say. By force, practically that, "Now we shall play, sir." "All right, you can play, but it is not to my perfectional ideas." So I had the part of Advaita Ācārya. So on the stage, when we saw all the public, they are crying, the audience. Regularly crying. We could not understand how they are crying, because we are dry; we have learned how to play, that's all. But he has trained in such a way that we could appreciate everyone was crying by seeing Caitanya, everyone hankered to play, act. So it was due to training. He trained in such a way that we could not understand how we are playing, but the audience, they appreciated so much. Every one of them was crying. And another effect was . . . because sometimes there were need of proxy. Some player has not come, and the rehearsal is going on. So the result was that each and every one of us learned the play of others. There was no scarcity of duplicate. So that was the first and last of playing in dramatic drama in my life. Caitanya-līlā. We had own club, Indian, Indian, like that.

Svarūpa Dāmodara: It also so happens that sometimes people who are not professionals, they are more sincere.

Gargamuni: We once went to see one Caitanya-līlā in Calcutta.

Gargamuni: They were no good.

Prabhupāda: That is third class. Our Caitanya-līlā was played by all the young men of aristocratic Mulliks, Seals, all millionaires.

Gargamuni: Nowadays it is not done.

Prabhupāda: That was the point he stressed that, "You are from the selected aristocratic family of Calcutta. You shall play, and the public theater is also playing. What should be the difference?" That was his point. So that he gave us. They were so gorgeously played. And we received so many invitations, "Please come and play in our house." (pause) Polish is all right?

Tamāla Kṛṣṇa: Not bad. Now by washing, it will become better.

Tamāla Kṛṣṇa: By cleaning every day. They have a nice system for your buzzer. It's going to be ready about nine o'clock. This will just be temporary. They have an automatic buzzer system in all the servants' quarters. So there will be a button here and . . .

Prabhupāda: Then so many servants will come? (laughter)

Tamāla Kṛṣṇa: No, according to the number of rings you give us.

Prabhupāda: That is a botheration. (pause) Just close the doors. I want to see how the doors are fixed up.

Gargamuni: These doors in the back.

Prabhupāda: Yes. (devotees go around closing the doors) All the greeting room? Hmm?

Gargamuni: It is quiet.

Bhavānanda: There's no doors on this side yet.

Prabhupāda: One door is lacking.

Tamāla Kṛṣṇa: One door there and one more door outside is still lacking. Still, it is pretty quiet.

Bhavānanda: And then if we pull the drapes over the doors it will be very quiet, these drapes.

Prabhupāda: All right. You can open. So that was my Dictaphone.

Tamāla Kṛṣṇa: Yes. This is for Dictaphone.

Prabhupāda: And this is for eating.

Tamāla Kṛṣṇa: This is for eating.

Prabhupāda: And this is for sitting.

Tamāla Kṛṣṇa: For sitting. And that's for resting, that room. Bathrooms are there.

Prabhupāda: And where to keep the legs? (laughter) For massaging.

Tamāla Kṛṣṇa: On top of our heads.

Prabhupāda: (laughs) Hare Kṛṣṇa. So to finish the whole thing, how long it will take?

Saurabha: For the guest house?

Saurabha: Well, everything that will be marble, I can't say. Marble is very difficult, because people that are available in India, they are from Makrana, Muhammadan people, and they are very difficult to work with. They don't always keep up, they don't always do what they promise. But otherwise, by July, practically, the building should be ready.

Prabhupāda: There is no way to engage them to work properly?

Saurabha: Yes. At the moment I have . . . it is going nicely. I have been with people in Makrana and about forty people here, which is very . . . I don't think there are many projects in India where they have so many. But there are always things happening. Political sometimes. Sometimes they ask a lot of money. Because they are all related. They are all family members, like one big family. So if something happens and they are not pleased with it, then they, everyone . . .

Prabhupāda: So make arrangement so that they are not displeased.

Saurabha: Yes, I am very careful, and at the moment it is going very nicely.

Prabhupāda: So keep that standard. Money scarcity we shall not allow. We shall put.

Saurabha: I pay exact what they are working for.

Lokanātha: I have got just one letter from them when I was in Vṛndāvana. They were doing good, but there was not enough men with them. I left five boys when I left Māyāpur for Vṛndāvana. One of the boys, when he came to know that I am not traveling, he decided not to go. And one other boy was approached and was asked to stay in Māyāpur. So there are only three boys on the bullock cart.

Prabhupāda: Nobody is joining?

Lokanātha: Yeah, the boys who are on the party, they are confident that in Bengal they should get some more boys to join. That's what they wrote to me in Vṛndāvana. So I did not get any more reports. They are pretty good boys. They should be doing . . .

Prabhupāda: It is difficult to make one devotee. That is . . . manuṣyāṇāṁ sahasreṣu kaścid yatati (BG 7.3). So if two, three men are there, that is sufficient for preaching also. You have to sit down any place and chant, and people will join. Local men. Not permanently, but at least to continue chanting.

Lokanātha: They do it. They are carrying Bengali books. They have pots for cooking prasādam. They have slide show.

Prabhupāda: But our Bhavānanda's preaching in Bengal was very encouraging.

Tamāla Kṛṣṇa: Your preaching in Bengal was very encouraging.