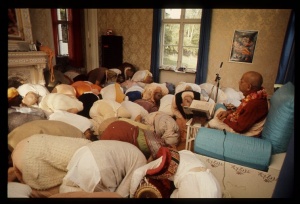 Girirāja: This is prasādam from the Deity.

Prabhupāda: Indians are intelligent . . . (Hindi) Indians . . . So, but they have sacrificed everything for . . . to imitate the Westerners. But Indian (Hindi) knowledge . . . But we have locked it. Our knowledge, we have locked it, and we are trying to imitate.

Shri Narayan: Yes, true. Imitation is not good at all. We must keep our originality and ancient culture.

Prabhupāda: Within ten years I have already written eighty-four books.

Shri Narayan: Eighty-four books. (rest of conversation in Hindi, with few interspersed English words) (to Girirāja) You understand what I said? Somebody should come with the . . . (indistinct) . . . the literature. Not the whole book, or the book, but some basic literature with a catalog of difficulties which are being faced from the government side. Then it will be easier. (Hindi) (Hindi conversation, with few interspersed English words as they take prasāda) Hrishikesh this side, from the hill point of view, will be better than . . . (indistinct) . . . (Hindi)

Prabhupāda: Bogilalji, he has got his house near Hrishikesh?

Girirāja: Yeah. I think near Haridwar.

Prabhupāda: So what he recommends there.

Shri Narayan: Hrishikesh is much better.

Prabhupāda: He is there now?

Girirāja: Ah, I'm not sure.

Prabhupāda: So his son is there.

Prabhupāda: You can bring one blank.

Indian man (1): Most of the books are sold in America or the Western countries or in our country as well?

Girirāja: (to guests) Is there anything you can't take? (referring to prasāda leftovers)

Shri Narayan: Whatever comes to take in this . . .

Prabhupāda: (Hindi) (pause) So for all your difficulties, you approach Shriman Narayan. He is the right person. (Hindi conversation, with few interspersed English words)

Girirāja: We got the IOD today.

Prabhupāda: Ācchā. Then should begin. (Hindi, explaining about the 10 ft of disputed land and the Municipality) (Hindi conversation) So that question they have now satisfied? That road?

Girirāja: Well, they're waiting for us to make an official application. But on this IOD, the condition was there that we have to hand over that 10 ft. But that was crossed out.

Prabhupāda: Then we can begin. That's all right.

Tamāla Kṛṣṇa: Would they like to wash their hands?

Prabhupāda: Yes. You can wash. There is basin. You can wash. (Hindi) No, if you want to wash your hands, this . . . (Hindi) (indistinct aside) (Hindi conversation) (break) (to Girirāja) Do you understand what he is saying?

Prabhupāda: For Indian government, he will help you. For local, he will help. For they are our well-wishers. So we approach these two persons for all difficulties.

Shri Narayan: Yes. We should be kept in touch what the difficulties are. I can talk to Morarji (Hindi), foreign minister . . . (Hindi conversation about permanent residenceship position)

Prabhupāda: (Hindi about going to Hrishikesh)

Shri Narayan: Dalmia, he can make arrangements. He has lot of influence in that area. His own house. (Hindi conversation)

(Shri Narayan and his associates leave)

Tamāla Kṛṣṇa: Everybody's appreciating this view. All the ladies were standing on the balcony.

Prabhupāda: So immediately contact Jayadal and Dalmia, and he has got a nice house. We go to Hrishikesh immediately. It is very nice. Or Patel.

Prabhupāda: Then we haven't got to go Kashmir.

Tamāla Kṛṣṇa: So first we'll contact Bhogilal, because he's in the city. If he cannot arrange, then we'll immediately contact Jayadal. Yeah, they're such close friends . . .

Tamāla Kṛṣṇa: And Hrishikesh is known to be very good. Gaṅgā is there.

Prabhupāda: So we can go there immediately. That decided.

Prabhupāda: . . . and take bathing in the Ganges.

Tamāla Kṛṣṇa: Yeah, I immediately feel attracted to going there . . .

Prabhupāda: It is nearer.

Tamāla Kṛṣṇa: So tomorrow I'm going into the city, anyway. I'll go and meet either Bhogilal or Pranlal. I have nice acquaintance with them, so I can meet them. Even if Bhogilal is not here, Pranlal is here.

Tamāla Kṛṣṇa: He can do also.

Tamāla Kṛṣṇa: So I'll make arrangements. Dr. Sharma is waiting for me, Śrīla Prabhupāda, so . . .

Prabhupāda: All right, you go now.

Tamāla Kṛṣṇa: I should attend.