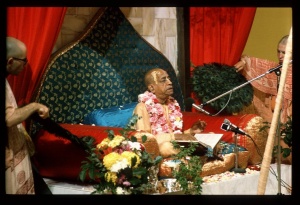 Śatadhanya: Actually, when we see it from that point of view, the scientists have given nothing beneficial.

Prabhupāda: Ultimately the our troubles are janma-mṛtyu-jarā-vyādhi (BG 13.9). And they do not know, science. They cannot solve.

Śatadhanya: When we say that, they say, "No one can solve them."

Śatadhanya: They say, "That is pie in the sky."

Prabhupāda: You say. We don't say. Because you cannot do, you say. We are cultivating Kṛṣṇa consciousness for this purpose. We are not wasting time. And we are wasting time doing so? We are fools? That is the first instruction, that soul is immortal and unchanging. This very instruction they cannot understand. That is first instruction. Dehino 'smin yathā dehe kaumāraṁ yauvanaṁ jarā (BG 2.13). This simple . . . A child changes body. That is beginning. There is no . . . Same child. For a while it may be. Now he's grown up, young man. It is not change of body? Why these rascals cannot understand? What is that . . . (indistinct) . . .? Therefore I have said, "You have no brain." It is a fact. My son, he's now young man. He took birth as a small child. Where is that body? Body has changed. Common thing. But these rascals, so fool, they cannot understand. I have become old man, but if some elderly persons, my guardians, were alive, he knew it, "He has become old man, but he was born a small child." That we have given in pictures, change of body. Change of body is going on. Why these rascals cannot understand? What is their intelligence? Therefore the real problem is the change of body should be stopped. And that is real scientific advancement. That is stated in the Bhagavad-gītā: stop change of the body. We are trying to follow this culture. They say, "It is impossible." So what is their knowledge of? Why the scientists cannot at least stop change of body? Young man . . . When I was young man, sir, stout and strong, then people came here. Now, on account of change of body, I am now invalid. Why the scientists cannot stop this? This is change of body. Simply bluff. They are big man amongst the rascals. They have not contributed anything. They say, "Change of body cannot be done"? What do they say? A young man is becoming old man. This is not change of body? Either stop this . . . And accept, soul is eternal; body is changing. What you can do? You cannot stop the change. Young man became old man. Or accept it is change of body.

Upendra: They accept that it's changing. Everything is changing in nature.

Prabhupāda: Changing? Stop it. Change for the good. Why for the bad? Change is inherent. That I know. I am saying that. But why should we change? Young man becoming invalid old man? Stop it.

Śatadhanya: They may agree that it changes, but then they say that at death then everything is finished.

Prabhupāda: Then you stop it.

Prabhupāda: Then you stop.

Prabhupāda: That is rascaldom. That means they are rascals. Anyone says that "Our . . . Where is death repeat?"

Prabhupāda: That is rascal, mūḍha. That is the proof they are rascals. They cannot do something; still, they are promising, "Yes, yes." This is the rascal theory.

Śatadhanya: They do not accept that beyond death there is life.

Prabhupāda: Why not? Why not? If your childhood takes boyhood, why not next?

Prabhupāda: You see everything. That means the body is finished. The body is finished. Childhood body is finished. Why do you say, "He is my son"? Now that this previous body is finished, he has got another body. You are confident. Otherwise how you say, "Here is my son"? Body has changed, but your son is there. And your friends say, "Oh, he is your son? Oh, I saw him, little boy." And he could not identify. The father knows that he is the same. That is the difference. The other man, he could not believe that child has become so grown up, young man. Father knows it. "No, he's the same child." That is the difference. Unless one understands this very first instruction, eternity of life, so-called scientists, philosophers—all nonsense. All rascals. Animal. The animal even. The so-called scientists, they are no better than the animals. That's all. They cannot understand this very simple thing. Animals cannot know. Otherwise, any sane man can understand. (break) Just like changing the cloth, it is . . . No, I can change this cloth. That does not mean I am the . . . (indistinct) . . . Vāsāṁsi jīrṇāni . . . (BG 2.22). They do not try to understand this. What is their advance? You are supporting these rascals. That means you do not understand about the soul. Is it not?

Prabhupāda: Still in doubt. The brain is not clear. Your background is that rascal civilization . . . (indistinct) . . . If you understand Bhagavad-gītā, you cannot support all this . . . (indistinct—too faint) That I never said.

Śatadhanya: You are not moved by the scientists.

Prabhupāda: You should be firmly convinced about our philosophy. Otherwise where is that firm . . .? How you can support these rascal scientists? That is your rascaldom. Take it for granted. One who cannot understand this fact, that soul is immortal, body is . . . He is no more human; he is animal.

Śatadhanya: Sa eva go-kharaḥ (SB 10.84.13). Ass and camel, you say. But if we follow strictly your instructions, then we may gradually understand.

Prabhupāda: Why gradually? That means the background is foolish civilization, that's all. It is simple thing, very simple. Child is becoming boy. The body has changed. Where is the difficulty? How you can defy this argument? (break) . . . (indistinct) . . . Still if it is so, that means a dog's obstinate rascal. Immediately. Or animal. Animal cannot be convinced.

Upendra: They . . . The karmīs, they made one movie where the whole world was monkeys, Planet of the Apes, and one human being came . . .

Prabhupāda: Rascal, they were monkeys; now they have become human being. Just change of position.

Prabhupāda: That is real evolution. What do they know of change of body? Therefore I say that, that you people, your brain is filled up with stool. You require thorough washing. You are not civilized. What is meaning of civilization? Improve animal life to civilized life. A dog can walk on the street naked; a man cannot. That is civilization. Otherwise dog is eating; you are eating. He's sleeping; you are sleeping. This is civilization . . . (indistinct) . . . Culture. You have no knowledge of culture. Real knowledge is this: the body is there and changing; the soul is there, eternal. Then you become on the platform of God. If you remain in the same ignorance of knowledge, then where is your advancement of civilization? If you cannot understand the simple truth, then where is your civilization?

Śatadhanya: They have no civilization.

Śatadhanya: Just from the daily newspaper one can see that it is all madness, insane. (break)

Prabhupāda: Because whole Vedic knowledge is concentrated on the point how to stop birth and death. Eternal life. That is . . . (Bengali) (end).