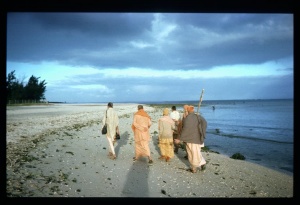 Prabhupāda: . . . actually what benefit to the human society? But technology, or high technology. Just like Indian technology. (break)

Tamāla Kṛṣṇa: I don't see any benefit. I see that they only get trouble.

Prabhupāda: In India the caste system was very good. From the very beginning the children would learn the technology of their paternal. Just like potter. You'll see the children of the potter, they are also making something—a small bird, a small fruit—and they would be sold. A small playing utensils—small glass, small plate—they're also sold. Other children would purchase. The whole family used to earn something. Nowadays they're sent to school, wasting time, and then unemployment and idle brain. What is the use of sending a potter's son to school?

Tamāla Kṛṣṇa: No, everything he needs to know, he can learn at home.

Prabhupāda: That's what I . . . Similarly weaver, that cloth weaving, "kat-kat." The wife is spinning, her husband is weaving, the children is weaving, and combinedly at the end of the day there is a cloth. And people were satisfied with simple necessities. They would not charge very much for the labor. And one nice cloth requires half a pound cotton. Half a pound cotton means maybe one rupee. Another one rupee for the labor. So now they are paying twenty to thirty rupees. Unnecessarily he has to earn this money and pay to the millionaires, and he will keep three dozen motorcars, so another man will be engaged in motorcar industry. In this way time is being wasted without any search after spiritual realization. Time is wasted in such so-called technology advancement. And the real purpose of life, jīvasya tattva-jijñāsā (SB 1.2.10), that is missing. And when you present that "This is the most important business of life," they say, "It is brainwashing." And they fight to check us, Communists and others, that "It is useless, God consciousness." (break) (long pause) So . . . Jāniyā śuniyā biṣa khāinu (Iṣṭa-deve Vijñapti 1). Because they are missing the aim of life, they are committing suicide. And this varṇāśrama-dharma was planned in such a way that everyone would be spiritually advanced. The weaver will get, the potter will get, the blacksmith will get, the brāhmaṇa is already there, kṣatriya will get—everyone. For them, lower-class men, demigod worship. At least they are accepting there is some higher authority. Among the blacksmith there is viśvakarma-pūjā. One day they will wash the all the instruments of blacksmith.

Tamāla Kṛṣṇa: All the instruments of . . .

Prabhupāda: Blacksmith. Somehow or other, all are cleaned. And with the fruit, with flower, candana, they'll worship.

Tamāla Kṛṣṇa: They worship the instruments? What is that called?

Tamāla Kṛṣṇa: Would the blacksmiths do the pūjā to Viśvakarmā, or brāhmaṇas?

Tamāla Kṛṣṇa: Who would do that?

Prabhupāda: Some sort of worship is there and instruction, many narratives. Women were advised to worship the Yamarāja, Sāvitrī, Satyavān. Then there was saṁskāras, purificatory method, out of which the higher class will be sacred thread ceremony. Always something spiritual, according to the . . . And actually learning Vedic knowledge, that was by the brāhmaṇas. They would give advice; people will follow. Brāhmaṇo jagato guruḥ. Just like Gargamuni came to Nanda Mahārāja. He took advantage of Gargamuni and performed some purificatory ceremony of Kṛṣṇa-Balarāma. Why these big, big institutions for wasting time and dating between girls and boys, and then they learn expert how to kill child, how to make abortion? Expert. Simply concentration on sex. Then become hippie. Frustration. Worship hog. Do they not?

Prabhupāda: The hippies are nothing but a group of madmen, that's all. A madman, they . . . means publicly sex, that's all. This Allen Ginsberg's movement is that—homosex, public sex. Ginsberg was very proud that he had introduced homosex. He was telling me.

Tamāla Kṛṣṇa: He was telling you?

Prabhupāda: When he first came to me he was very proud: "I have introduced homosex." He thought very brilliant work it was. And another man, what is that? He's put into jail.

Prabhupāda: Ha, ha. What is his position now?

Tamāla Kṛṣṇa: I haven't heard about him in the last few years. He's in and out of jail, I think. I saw one time he was just getting out of jail. It just shows . . . I think he was a big professor at Harvard. So the idle mind, devil's workshop. So he used his big brain for making this LSD. That's the value of this Ph.D. degree.

Prabhupāda: He was Ph.D.?

Tamāla Kṛṣṇa: Oh, yeah. Big personality. And because of the fact that he was an important member of the faculty at Harvard, so even though all he produced was an intoxicant, he gave it so much explanation, that "This is . . ."

Tamāla Kṛṣṇa: Yeah, this is transcendental. "This is real psychotherapy," he called it. He made it seem like this is legitimate, this is a bona fide experiment, just like you go to a psychologist or psychiatrist. He tried to explain it as a medical drug for helping the mind. But as a result of it so many people became crazy by using it.

Tamāla Kṛṣṇa: I think you saw so many people who were taking it in America.

Tamāla Kṛṣṇa: Devānanda. I remember at one initiation ceremony you asked . . . It was Kauśalyā. You said to her, "What are the four principles?" So she stated them. Then you said, "What is the fifth?" So she didn't know what to answer. Then you said, "No LSD."

Prabhupāda: This Kauśalyā girl was loitering in the street.

Prabhupāda: Yes. No protection. Somehow or other, she came to see me when I got into Los Angeles.

Tamāla Kṛṣṇa: In that way you saved all of us, Śrīla Prabhupāda.

Tamāla Kṛṣṇa: A very nice letter came from Yamunā devī with a few photographs. Would you like to see it?

Tamāla Kṛṣṇa: She has very good handwriting. "Śrī Śrī Guru-Gaurāṅga Jāyate. Dearmost and respected Śrīla Prabhupāda, please accept our repeated humble obeisances at your sanctified lotus feet. Although we are certainly unfit to offer you our prayers and offenseless chanting for your well-being, still we beg to become purified to pour the nectar of the holy name of the Lord into your eternal transcendental service by following your divine instructions. From the beginning you have instructed to serve in sincere faith in vapu or vāṇī. That is our life's work, to make each and every moment a fit receptacle for receiving your benedicting rays of mercy. Enclosed is an offering of digestive spice for your pleasure as well as two photos of Śrī Rādhā-Vana-vihārī on Candana-yātrā and Śrī Nṛsiṁha-caturdaśī. Viśākhā devī remained here to photograph for the upcoming Vedic cookery book. The program here is flourishing under your shelter and glories. We beg to remain your servants eternally, Yamunā devī dāsī and Dīnatāriṇī devī dāsī." They sent these preparations. It says, "savory" and "sweet." It looks like they made these. Very expert.

Prabhupāda: So you can give me little bit.

Tamāla Kṛṣṇa: And they sent photographs. These Deities are superwonderful.

Prabhupāda: Everything is very nice.

Tamāla Kṛṣṇa: . . . people will just eat themselves, eat each other.

Prabhupāda: First thing is . . . Māṁsa. "I'll kill you. I'll eat you." That time is coming. It has already . . . Russia, there is no food. They are very much proud of the so-called solutions of the world—but there is no food. Pita mata pech(?) Therefore they are coming again to religion. They are realizing. There is a line, even for flesh.

Tamāla Kṛṣṇa: Around the block, they say.

Prabhupāda: I have seen. We wasted so much time.

Tamāla Kṛṣṇa: Prabhupāda, I was thinking of giving you that tablet. Maybe you could take it with this drink? Because the feet are swelling again. I wanted to give you that tablet.

Prabhupāda: No, let me see.

Prabhupāda: Today I passed stool again before going to the temple. (pause) So many . . . Actually, we enjoyed life in our childhood. Although we were not very nicely dressed and not very comfortable, the so-called comfortable. We could sleep anywhere. We did not require any nice dress or nice food. My mother used to prepare very nice food. We were glad in that way. Nice paraṭā, nice vegetable, ācāra, so many things she used to prepare. Always preparing some food. Puffed rice.

Tamāla Kṛṣṇa: She was cooking with ghee?

Prabhupāda: Yes. Our family with ghee. Some fried. That is used, oil.

Prabhupāda: Ghee and oil, both were used. Where is that happiness gone?

Prabhupāda: Therefore there is struggle—Communist, this, that.

Tamāla Kṛṣṇa: Actually you still see a little bit of that happiness in smaller towns.

Prabhupāda: No, in the village. They have got enough milk, grains. Is it not? Grāmete dudha dhana cala ekhana nai, gatas paya.(?) Eh? Fruit. They import. They make them poverty-stricken. If the villagers do not sell, ample fruit. But these townsmen, they go there, pay them, and out of greediness they sell their own food only for money. And then they spend for drinking and cinema and . . . Horrible civilization. (Bengali) Those packets, bring here. (Bengali)

Tamāla Kṛṣṇa: Those packets from Yamunā. Is that what you want?

Tamāla Kṛṣṇa: Oh, that, from the medicine cabinet. Upendra put it away. The chalk and other things.

Tamāla Kṛṣṇa: Did you taste that savory and digestive from Yamunā?

Prabhupāda: I do not know.

Tamāla Kṛṣṇa: They didn't give you any?