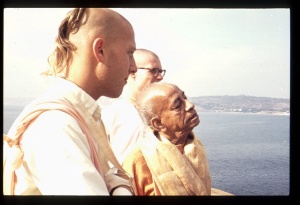 Purī Mahārāja: (Bengali discussion with Prabhupāda and others) (break)

Purī Mahārāja: (Bengali with Prabhupāda and others)

Purī Mahārāja: (Bengali with Prabhupāda and others) Who is that? He is in charge of Colombo. Where . . .?

Purī Mahārāja: Ha. I have seen him, but I could not able to . . . Haṁsadūta. He sings well. Last parikrama I saw him.

Tamāla Kṛṣṇa: So he challenged him to a big thing, and in the newspapers every day for two or three months there was discussion between Haṁsadūta Mahārāja on behalf of the belief that life comes from life, not from chemicals—life comes from Kṛṣṇa. So he defeated this man, big scientist.

Tamāla Kṛṣṇa: And the man did not come.

Prabhupāda: You can read one newspaper article.

Tamāla Kṛṣṇa: One of the articles?

Tamāla Kṛṣṇa: ". . . the appropriate chemical into himself to check death . . ." Let him make himself deathless. "And restore his old and worn-out body with youthful luster and beauty. He may find this task too difficult, so perhaps he could just produce a simple form of life like a mosquito or a bedbug. Better still, let him recombine the chemicals of the praying mantis he decapitated, as described in his article, and bring it back to life. Or, is the science of Dr. Kovoor only a one-way road of destruction of life? But it may be that science is not yet ready to produce a finished product of life, so he could make a plastic egg and inject into it the yellow and white chemical substances, incubate such an artificial egg and thereby produce one chicken, which could then go on laying eggs and producing more and more chickens. Even this task may be a little too difficult for Dr. Kovoor, so perhaps he could simply produce a drop of milk or a grain of rice or an ounce of gold by chemical combination. Then we could begin to take him seriously. However, everyone knows that these are impossible tasks for even the most powerful so-called scientist. Dr. Kovoor will undoubtedly give the reader in his next exposition a long-winded barrage of words to cover up his bluff. The sum and substance of it will be, 'We will do it in the future. We are trying.' In any language, this is just a bluff."

Haṁsadūta: No. He's a Tamil.

Haṁsadūta: His father was a minister.

Purī Mahārāja: Yes. Proper dose you have given. Kṛṣṇa must bless him.

Tamāla Kṛṣṇa: And then later on he gave ten lakhs.

Purī Mahārāja: He cannot be called as "doctor." How could he be a doctor?

Prabhupāda: There is a story. A bridegroom was selected. So, the other party, bride's party, they inquired how the bridegroom was quite qualified. So they said, "He's a doctor." Then they inquired, "What kind of doctor? Doctor of philosophy, doctor of medicine or . . .?"

Purī Mahārāja: Doctor of which way?

Prabhupāda: (Bengali with Bhakti-caru about prasādam for guests) (break)

Purī Mahārāja: (Bengali with Prabhupāda and others about Jagannātha)

Tamāla Kṛṣṇa: Śrīla Prabhupāda? Maybe Purī Mahārāja would like to see the pictures from the Los Angeles Ratha-yātrā. Remember those pictures I showed you in London?

Tamāla Kṛṣṇa: I have a photo album. This is the Ratha-yātrā we celebrated in Los Angeles, California. This is Jagannātha. We call it New Dvārakā. Los Angeles we call New Dvārakā. And this is the Jagannātha mūrtis, Gaura-Nitāi, Rādhā-Kṛṣṇa. This is in the temple. And Rukmiṇī-Dvārakādhīśa. So this is . . . they are constructing the rathas, very big. This was a paṇḍāl we are constructing. Many of the little children, they helped to make the garlands, mālā. And the artists, they did the paintings.

Tamāla Kṛṣṇa: Then they made so many signs, preparations. This was the vyāsāsana in the ratha, and Jagannātha Swami was carried.

Tamāla Kṛṣṇa: Yes, here you can start to see.

Purī Mahārāja: In Purī the Jagannātha ratha is forty-five.

Tamāla Kṛṣṇa: But this is Los Angeles. Everything is big there. You see Jagannātha. You see Him?

Tamāla Kṛṣṇa: Lord Jagannātha is all-attractive. You cannot keep Him here. He's going out the door. This is . . . One of the sannyāsīs was giving a big lecture. We had some elephants. The children were riding on them. See, "Free Love Feast." "Prasādam distributed." You can see these people are . . .

Hari-śauri: The prasādam will be ready in about five minutes, Śrīla Prabhupāda. They're just cooking the purīs now. The halavā is done, and the sabjī is almost ready. (break)

Purī Mahārāja: (laughs) There is so much prasādam.

Tamāla Kṛṣṇa: No, not so much.

Prabhupāda: What you have given?

Tamāla Kṛṣṇa: Because you are our most valuable guests. (break)