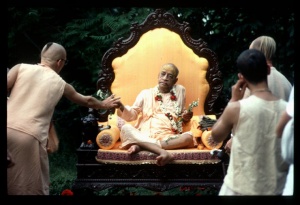 Prabhupāda: So, that legal business?

Tamāla Kṛṣṇa: Girirāja has gone into Mathurā to meet with Mr. Garg to just see that all of the drafts are in order, if everything is in order. Then hopefully tomorrow we can finish it all.

Tamāla Kṛṣṇa: You mean the treatment? Yes, I have learned to take everything very philosophically, Śrīla Prabhupāda. I mean I took it that you were presenting the . . . you know, presenting the whole picture to be considered.

Prabhupāda: I am now puzzled. Still, I am thinking.

Tamāla Kṛṣṇa: I thought it was very good what you said, in the sense that it . . . It actually makes everything . . . It presents a more real picture. We should not be overly optimistic, neither should we be completely fatalistic.

Tamāla Kṛṣṇa: And above all, our whole program here is completely transcendental. I mean, it's just like Kṛṣṇa dāsa Bābājī said. Your consciousness is so sublime that it's just wonderful at every moment to be with you. I mean, although I wish that you were . . . We all wish that you were completely healthy, yet at the same time we have never experienced so much nice exchanges with you. I mean, we all . . . Every moment is so relishable to be with you. So I mean, even this puzzlement is very transcendental. None of us see any of this in any kind of a mundane view. It's all due to your consciousness being so Kṛṣṇa conscious, Śrīla Prabhupāda. I mean to me this puzzlement is simply another proof of the existence of Kṛṣṇa, 'cause Kṛṣṇa certainly is not puzzled. It seems like everything is happening according to His plan.

Prabhupāda: Kīrtana may be stopped now.

Tamāla Kṛṣṇa: Stop for a while now. I think for the rest of the night it's good if there's . . . (kīrtana stops) The kavirājī assistant came this evening. We hadn't called him. I think he came on his own. He wanted to see how you were. I didn't think there was so much need for him to see you. He's not so senior a man. And the medicine is already prescribed, so what would be the benefit of his coming? We're not going to allow him to change the medicine, so I felt there was no real need. We can . . . Bhakti-caru Mahārāja spoke with him, gave him report of how you are.

Prabhupāda: He is also educated?

Tamāla Kṛṣṇa: Young and . . . We're pretty lucky, as far as I can see, with that Damodar Prasad Shastri. I mean he seems to be in his own category from all the kavirājas I've ever seen. He really seems different than that.

Tamāla Kṛṣṇa: He really is a little Kṛṣṇa conscious.

Tamāla Kṛṣṇa: That . . . The kavirāja that we brought from Calcutta. He's . . . The thing I liked about him also is I felt that he was the kind of person who I . . . Somehow I felt that in your childhood or something, that your family would have engaged some such a Marwari . . . You always said how the Mulliks' house was located amongst many Marwari community people. I was thinking somehow it seemed suitable that this is . . . Of course, we don't designate like that, but somehow it seems suitable that . . . you know. The Marwaris are . . . They occupy a high place in the community. Everything they do, they do very first class. Their food is first class. They do first-class business. Most of our members are from the Marwari community. Anyway, it just seemed like it was nice that this man . . .

Prabhupāda: Their food is first class, there is no doubt.

Prabhupāda: Yes. It is certified by Sir P. C. Raya.

Tamāla Kṛṣṇa: By who, Śrīla Prabhupāda?

Tamāla Kṛṣṇa: What was his name?

Pañca-draviḍa: They cook very bad. I like this doctor too, Śrīla Prabhupāda, because he was respectful to you.

Prabhupāda: I had some stool.

Tamāla Kṛṣṇa: Earlier today. That also, I see by the writing, was good color. Actually, that's a good sign, that it's being passed naturally, without any artificial means. You may be feeling relief from that.

Prabhupāda: Yes. The stool which I was proposing came out by juice.

Tamāla Kṛṣṇa: Yes. Did Prabhupāda have barley and milk tonight?

Bhakti-caru: No, I got it ready. I just came to ask. Śrīla Prabhupāda? (Bengali)

Prabhupāda: Hmm. Now you can go.