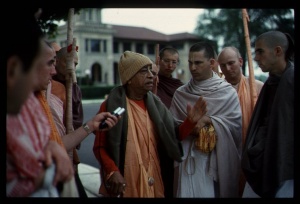 Tamāla Kṛṣṇa: . . . the medicine can be given for ten or twelve days, and everything will go exactly according to some plan. This was my point from the beginning. It's not a very difficult thing. The kavirāja probably can adjust it very easily to stop stool from passing. Naturally, if you stop the medicine, maybe the stool will stop, but that doesn't actually solve the problem. That doesn't cure the disease. The disease is not that you're passing stool. That's a side effect of, perhaps, the medicine or maybe something you're eating. The medicine is required for getting better, but now, if the medicine causes you to pass stool—if that's actually the reason—then it has to be adjusted.

Śatadhanya: Just a couple of days ago, Śrīla Prabhupāda, you were constipated, and you were thinking that it was necessary to take an enema.

Tamāla Kṛṣṇa: But stool-passing this many times is not right either. Passing stool five, six times, that is not right. It's obvious that it's a result of something. It's either the medicine or the diet. Prabhupāda says it's the medicine, just like last time when he took that makara-dhvaja. And he was right. It was the medicine. (break) . . . the best thing to do. There may be some good effect by taking the medicine in addition to the causing you to pass stool. So if by giving you some other small medicine at the same time—you can still take this medicine and you don't pass stool—then that's the best thing. This only a kavirāja knows. I don't know this. I have no idea. Maybe we should take the help of that . . . this doesn't seem like a very difficult thing, Śrīla Prabhupāda. Passing stool is something that any kavirāja should be able to treat, and maybe for this small thing we should call that assistant who was here yesterday. That's why that kavirāja from Calcutta arranged for there to be an assistant here, in case . . . in other words, he came and diagnosed the disease, and he made a very complicated thing, medicine, that an expert had to make. And for the fact that there might be some side effect, that you may not sleep properly or you might be passing stool, something of this kind, he found out one assistant for the purpose of helping in these cases. So why not carry through with that and take the help of this assistant, see what he says? This is a common ailment that people have, diarrhea or passing stool too often, loose bowels. That's not a very major problem.

Prabhupāda: No, you have to stop.

Prabhupāda: And he is not experienced.

Tamāla Kṛṣṇa: Well, I don't know . . . he's not as . . . the point is, for such a thing that you have now, passing stool, I don't think that requires a highly learned kavirāja. That's a common ailment, that someone passes stool too easily. That's not a very difficult ailment to take care of.

Prabhupāda: So consult him.

Tamāla Kṛṣṇa: Hmm. I think this is the time to do that. This is a side effect of taking the medicine. Just giving up taking medicine may solve one problem, but it's not going to solve the main problem. I mean, this is to say that we're putting some hope on this kavirāja from Calcutta. If eventually he is shown that his medicine didn't work, then I won't . . . I wouldn't say anything. But I'm going on the argument that his medicine is doing some good. So I don't want to see it stopped. So you have no objection if we consult the other kavirāja, do you?

Prabhupāda: What can be done?

Tamāla Kṛṣṇa: No. I think this is the purpose for which he was chosen, at such a time like this that he should be consulted. I'll tell Bhakti-caru to talk with him, Śrīla Prabhupāda.