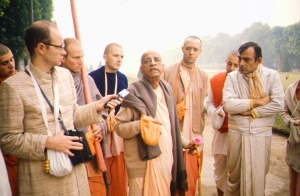 Prabhupāda: San Diego, we have got a temple?

Jayādvaita: Oh, yes. We have . . . they just moved to a nicer location, nicer building. They have, oh, maybe seventy devotees. It's quite large temple near the ocean in San Diego. They have . . . every year at Govardhana-pūjā they have a very nice festival in the park. They have chanting and discourse and distribute prasādam. Then in the spring again they have a very nice festival. You were there one time. You spoke. Your Divine Grace spoke at one festival in the park in San Diego. They also go to preach just over the border in Mexico, and many Mexican boys join our San Diego temple, Mexican boys who've come to America. They join our temple in San Diego. The Deity there is very beautiful and very nicely dressed also, in San Diego.

Pañca-draviḍa: Their new temple is very nicely decorated, with arches and everything. It's Rādhā-Giridhārī.

Jayādvaita: The president is Guṇa-grāhī Prabhu. He's been a devotee for a long time. So the management is also very nicely going on. (break) You sent Bhavānanda there many years ago when they were in Brooklyn and ordered him to make the devotees happy. And ever since then, they've been peaceful. Very sumptuously . . . (indistinct) . . . even before that. I remember when I first came to New York, when the storefront was there. I came on Sunday, and there were so many different preparations. Haṁsadūta Mahārāja was cooking. And so many different preparations. And after taking that feast I decided that I would not leave—"This is too nice." So they're going on, still very opulent, sumptuous prasādam. And people are deciding that, "Oh, this is very nice. Let us not leave. Let us go on taking prasādam." And in the restaurant very respectable people come. (pause)

Prabhupāda: You read some more.

Jayādvaita: Kṛṣṇa book. All right. Any particular part that you'd like to hear, Śrīla Prabhupāda?

Jayādvaita: Second Volume. "Akrūra's Arrival in Vṛndāvana." Is that all right?