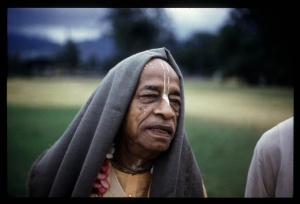 Tamāla Kṛṣṇa: Hmm. I had a nice talk with Shastrijī, very detailed talk. He explained that the main . . . he said we have brought you to him at the very last possible moment. He said had we come six months earlier, so much easier it would have been. He said this time that we have called him just now was just timely that he came back again. He said that the main problem is the kidney. He said the kidney is working; otherwise you could not pass urine. And the medicine which he has given over the past week has had an effect, because the urine is increased. He explains that the whole body, there's very little blood due to not having eaten for so many months, and there's great weakness because of this. He says the muscles are all more or less gone; therefore you have no strength, because the blood is not there. And because you're so weak, he can't give strong medicine, because it will be too strong for you. He has to give it very, very carefully and slowly, in small doses. He says the kidney, urine goes downwards, and blood goes upwards. So the urine is passing. Now he's going to give . . . he started today already giving medicine which will help to form blood. And automatically . . . he says that . . . I asked him, "How will we know if it is working? Will Prabhupāda feel stronger?" He said: "Not immediately." He said: "I can't give it very much dose." He said: "I'll be able to tell it from the pulse." I guess that's the kavirāja's ability, that he can tell from the pulse. He said: "I'll be able to tell from the pulse that the medicine for creating more blood is being taken up by the body."

Then we asked him . . . he said that it is better you don't sit up, 'cause it puts strain on the heart. He said it's better you don't sit up for the next four days or so. Better that you lay down all the time. And that for feeding you, that we can feed you while you're laying down. He said it's not necessary that you should take anything solid unless you want it. Liquids are good, he said, for now. Because the whole point is that he has to treat you very, very slowly. There's no question of rushing anything, because you're too weak. He said, if you want solids, that things should not be cooked in ghee. There should be no dahī. He gave some restrictions—not so many, but some. He said just like mālpura would not be good because it's cooked with ghee. I asked him frankly what he thought was your chances. He said that he felt your chances were quite good. He said the whole point is that . . . he said of course it depends on Kṛṣṇa. He said: "But the chances are very good." He said: "But it will be slow." I said: "But even if Prabhupāda recovers, what does that mean, 'recover'?" He said: "Recover means to be fit." I said: "Well what about like walking?" He said: "Fit means walking, talking, eating, everything." He said: "If this medicine works, then he should live for at least ten more years." He said that the treatment will take at least three or four months. It's a very slow treatment. And he felt fairly confident. He feels there's a very good . . . he says that he treated one patient who had twenty ulcers, and every single physician said that the man had to die within a week to two weeks. And he made this man take 34 kilos of buttermilk per day, and the man survived. He got rid of all the ulcers and survived. He said so he's seen . . . he said he takes your case as very, very serious, though. It's most . . . at the final point. I said: "Well, Prabhupāda says that he's dead. Now he says he even feels practically dead." The kavirāja said: "He's not dead. I have seen worse cases even than this, and they could survive." He said: "But I have to work very, very carefully. And Prabhupāda should keep good spirits," he said.

Tamāla Kṛṣṇa: I felt very . . . I thought that was good, that recovery doesn't mean simply laying in bed for the next few years, but recovery means actually being fit. He says it's gradual. He said once if the med . . . he said: "Now, the medicine I've given for the kidneys," he says: "over the past week, the kidney has not gotten worse. It's improved a little." He said: "So that . . ." (break) (end)