A Second Chance - The Story of a Near-Death Experience 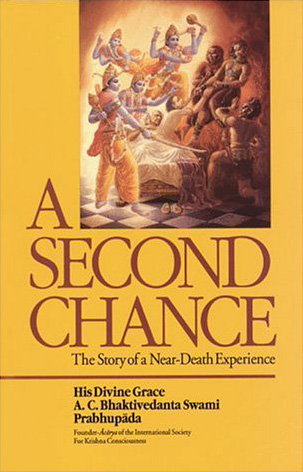 A Second Chance
The Story of a Near-Death Experience

1. Separating the Men From the Animals

2. In Imitation Of the Original

3. At the Final Hour

4. Neither Birth Nor Death

5. The Viṣṇudūtas To the Rescue

6. The Residents Of the Spiritual Sky

11. The Realm of the Senses

18. Pilgrim with a Purpose

22. The Glories Of the Holy Name

As the sinful Ajāmila lay on his deathbed, he was terrified to see three fierce humanlike creatures coming to drag him out of his dying body and take him away to the abode of Yamarāja, the lord of death, for punishment.

Surprisingly, Ajāmila escaped this terrible fate. How? You'll find out in the pages of A Second Chance: The Story of a Near-Death Experience.

You'll also learn many vital truths about the fundamental nature of the self and reality, so you can better prepare yourself for your own inevitable encounters with death and dying.

Even today, people momentarily on the verge of death report encounters like Ajāmila's, lending credibility to the idea that there is life after death.

In 1982, George Gallup, Jr., published a book called Adventures in Immortality, which contained results of a survey on American beliefs about the afterlife, including near-death and out-of-body experiences.

Sixty-seven percent of the people surveyed said they believe in life after death, and fifteen percent said they themselves had had some kind of near-death experience.

The Gallup survey is intriguing, but it leaves unanswered this basic question: Is there any scientific evidence for near-death experiences, particularly of the out-of-body type?

Apparently there is - from studies of people on the verge of death who, while supposedly unconscious, accurately report events relating to their physical body from a perspective outside it. Heart attack patients, accident victims, and soldiers wounded in battle have all reported such experiences.

Dr. Michael Sabom, a cardiologist at the Emory University Medical School, undertook a scientific study of such reports. He interviewed thirty-two cardiac-arrest patients who reported out-of-body experiences. During a cardiac arrest the heart stops pumping blood to the brain, and so a patient should be totally unconscious. Yet twenty-six of the thirty-two patients reporting out-of-body experiences during cardiac arrest were able to give fairly accurate visual accounts of their resuscitation. And the remaining six gave extremely accurate accounts of the specific resuscitation techniques, matching confidential hospital records of their operations.

The results of Sabom's study, detailed in his book Recollections of Death: A Medical Investigation (1982), convinced him of the reality of out-of-body experiences. He concluded that the mind was an entity distinct from the brain and that the near-death crisis caused the mind and brain to split apart for a brief time. Sabom wrote, "Could the mind which splits apart from the physical brain be, in essence, the soul, which continues to exist after the final bodily death, according to some religious doctrines? As I see it, this is the ultimate question that has been raised by reports of the NDE (near-death experience)."

The true dimensions of that ultimate question are thoroughly explored in A Second Chance, by His Divine Grace A.C. Bhaktivedanta Swami Prabhupāda, the founding spiritual master (ācārya) of the International Society for Krishna Consciousness.

Thousands of years ago in India, the history concerning Ajāmila and his near-death experience was related by the great spiritual master Śukadeva Gosvāmī to his disciple King Parīkṣit. Their conversation is recorded in the Sixth Canto of the Sanskrit classic Śrīmad-Bhāgavatam, renowned as the ripened fruit of the tree of India's timeless Vedic literature.

In 1975-76, in the course of translating the Śrīmad-Bhāgavatam into English, Śrīla Prabhupāda translated the story of Ajāmila. And as with the rest of the work, in addition to the text he provided an illuminating commentary on each verse.

But this wasn't the first time Śrīla Prabhupāda had explained the story of Ajāmila. During the winter of 1970-71 Śrīla Prabhupāda was traveling with some of his Western disciples in India. They had heard him speak about Ajāmila several times, and at their request he now gave a systematic series of lectures on the Ajāmila story.

Thus A Second Chance consists of texts from the Sixth Canto of Śrīmad-Bhāgavatam (reproduced here in boldface type), selections from Śrīla Prabhupāda's commentary, and excerpts from transcriptions of his lectures during the '70-71 India tour.

The history of Ajāmila is dramatic, powerful, and engaging. And the sharp philosophical and metaphysical debates that punctuate the action as Ajāmila confronts the messengers of death and finds deliverance are bound to excite the interest of those concerned with life's deepest questions.