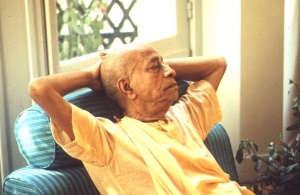 Indeed, You alone know Yourself by Your own potencies, O origin of all, Lord of all beings, God of gods, O Supreme Person, Lord of the universe!

The Supreme Lord Kṛṣṇa can be known by persons who are in a relationship with Him through the discharge of devotional service, like Arjuna and his successors. Persons of demonic or atheistic mentality cannot know Kṛṣṇa. Mental speculation that leads one away from the Supreme Lord is a serious sin, and one who does not know Kṛṣṇa should not try to comment on Bhagavad-gītā. Bhagavad-gītā is the statement of Kṛṣṇa, and since it is the science of Kṛṣṇa, it should be understood from Kṛṣṇa as Arjuna understood it. It should not be received from atheistic persons.

The Supreme Truth is realized in three aspects: as impersonal Brahman, localized Paramātmā and at last as the Supreme Personality of Godhead. So at the last stage of understanding the Absolute Truth, one comes to the Supreme Personality of Godhead. A liberated man and even a common man may realize impersonal Brahman or localized Paramātmā, yet they may not understand God's personality from the verses of Bhagavad-gītā, which are being spoken by this person, Kṛṣṇa. Sometimes the impersonalists accept Kṛṣṇa as Bhagavan, or they accept His authority. Yet many liberated persons cannot understand Kṛṣṇa as Puruṣottama, the Supreme Person, the father of all living entities. Therefore Arjuna addresses Him as Puruṣottama. And if one comes to know Him as the father of all the living entities, still one may not know Him as the supreme controller; therefore He is addressed here as Bhūteśa, the supreme controller of everyone. And even if one knows Kṛṣṇa as the supreme controller of all living entities, still one may not know that He is the origin of all the demigods; therefore He is addressed herein as Devadeva, the worshipful God of all demigods. And even if one knows Him as the worshipful God of all demigods, one may not know that He is the supreme proprietor of everything; therefore He is addressed as Jagatpati. Thus the truth about Kṛṣṇa is established in this verse by the realization of Arjuna, and we should follow in the footsteps of Arjuna to understand Kṛṣṇa as He is.