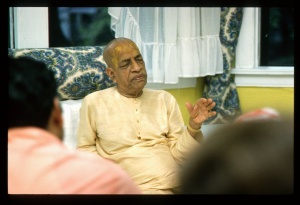 When Arjuna thus saw Kṛṣṇa in His original form, he said: Seeing this humanlike form, so very beautiful, my mind is now pacified, and I am restored to my original nature.

Here the words mānuṣaṁ rūpam clearly indicate the Supreme Personality of Godhead to be originally two-handed. Those who deride Kṛṣṇa to be an ordinary person are shown here to be ignorant of His divine nature. If Kṛṣṇa is like an ordinary human being, then how is it possible for Him to show the universal form and again to show the four-handed Nārāyaṇa form? So it is very clearly stated in Bhagavad-gītā that one who thinks that Kṛṣṇa is an ordinary person and misguides the reader by claiming that it is the impersonal Brahman within Kṛṣṇa speaking, is doing the greatest injustice. Kṛṣṇa has actually shown His universal form and His fourhanded Viṣṇu form. So how can He be an ordinary human being? A pure devotee is not confused by misguiding commentaries on Bhagavad-gītā because he knows what is what. The original verses of Bhagavad-gītā are as clear as the sun; they do not require lamplight from foolish commentators.